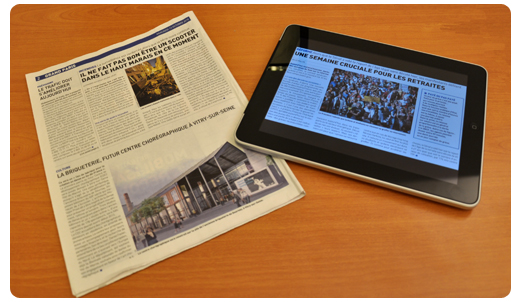 The Kindle might be outselling good-old-fashioned books over at Amazon, but that doesn’t mean e-reading has all the advantages. A study from digital research firm Miratech reveals that iPad readers are less likely to retain information than those reading from newspapers. “We asked a representative sample of participants to read similar information from a printed newspaper first, and then from its iPad version,” the study explains.

The learning discrepancy can’t be chalked up to tablet-unfamiliarity either; Miratech chose participants who were iPad users to begin with so as to rule out any learning curve conflicts. Researchers observed the participants as they read from the device and from a paper and used eye-tracking technology to monitor this process, later asking questions to determine how well they remembered the content and advertisements. While there was no real difference in reading time, when it comes to concentration and retention, the iPad couldn’t touch traditional newspapers. People spent more time focusing on newspaper content, whereas iPad users were more apt to skim the articles. This accordingly led to better information retention: 90-percent of participants remembered what they read from newspapers and 70-percent remembered what they read from iPads.

Score one for enduring pastimes! It’s not often that digital innovation can’t best the functions it’s attempting to replace or improve upon. E-readers and tablets have been heralded for many things: Their eco-friendly elimination of paper, their ability to save space, making reading more attractive to otherwise apathetic users. But technology in general isn’t known for making us more focused – quite the opposite. Multitasking is becoming a near addiction thanks to the all-encompassing features built into our phones, computers, gaming consoles…this list could obviously go on. So while it might be troubling for e-reader and tablet enthusiasts out there to know they have to try a little harder to focus, it’s probably a sacrifice users are willing to make.

Miratech says it will soon announce results on ad visibility when it comes to the two mediums.