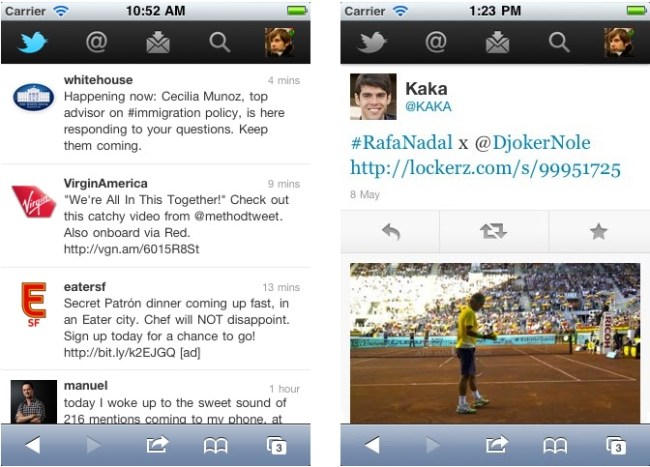 The folks at Twitter have been hard at work developing a new interface for mobile browsers – and today the San Francisco company began to roll it out.

Announcing the new version on its blog on Wednesday, the company said, “This web app allows us to provide a high-quality and consistent Twitter experience on high-end touchscreen devices – whether or not an official Twitter application is available.”

The post continues: “It was built from the ground up for smartphones and tablets, which have more advanced browsers that support the latest web technologies, including HTML5.”

The new app replaces the previous rather cumbersome version with an interface that closely resembles the iPhone app – by that we mean, for example, the introduction of icons for @mentions, messages, stream and search – something the old mobile browser lacked. In the case of the new mobile web interface, however, the icons are at the top, not the bottom. Android users will be more familiar with the icons-on-top look.

The designers of the new interface say they have made something quick to use – quick to scroll through the timeline, quick to move between tabs and quick to compose tweets  – although we think that rather depends on your typing prowess. The blog post says that the new interface “takes advantage of capabilities that high-end device browsers offer, such as touch gestures and a large screen. And it’s simple – it’s easy-to-use and has the features you’d expect from a Twitter application, including your timeline, @mentions, messages that you can read in conversation view, search, trending topics, lists, and more.”

The new application for mobile browsers is being rolled out gradually, so don’t be surprised if it’s not showing up on your mobile device right this minute. Twitter says it is releasing it “to a small percentage of users on iPhone, iPod touch, and Android smartphones, and we’ll be rolling it out to additional folks with those devices in the coming weeks.” In the meantime, the old mobile interface will remain available to users.