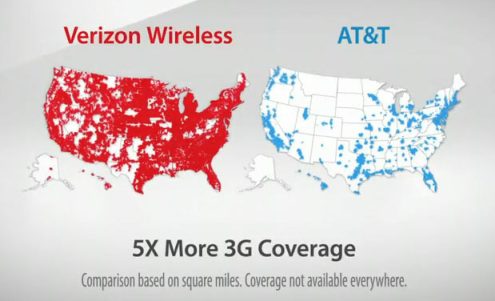 AT&T and Verizon, the nation’s second largest and largest telecoms, respectively, are at open war. With Verizon’s new Droid phone looking to challenge the iPhone as the reigning media smartphone, the pair wage battle in the court room over Verizon’s commercials which depict AT&T’s poor 3G coverage.

It has been reported that in some areas, such as New York City, that AT&T’s call drop rates are as high as 30 percent — or that it merely has no 3G service at all. However, AT&T does have broad coverage under its older EDGE network, and it claims that Verizon’s ads are deceptive. AT&T’s argument basically boils down to a claim that the average viewer is fooled to believe that the Verizon commercial’s maps represent total coverage and not 3G coverage — despite several textual and audio clues. Thus it claims the commercials are misleading and damaging.

Initially AT&T only sued over Verizon’s “There’s a map for that” series, which introduced Verizon’s rich red map and AT&T’s lacking blue map to viewers, all while poking fun at Apple’s iPhone slogan (“There’s an app for that”). AT&T recently expanded the suit to include Verizon’s new Christmas themed ads “The Island of Misfit Toys”.

Verizon has flatly refused to stop airing the commercials, and to AT&T’s dismay, the dispute seems unlikely to be resolved until well into the holiday season. AT&T had hoped to quickly get Verizon’s ads pulled from TV.

In court this week Verizon filed new documents, according to Engadget, which blast its competitor, saying that the lawsuit is a weak attempt from a player that just can’t compete. States Verizon’s filing, “AT&T did not file this lawsuit because Verizon’s “There’s A Map For That” advertisements are untrue; AT&T sued because Verizon’s ads are true and the truth hurts.”

Continues the filing, “In the final analysis, AT&T seeks emergency relief because Verizon’s side-by-side, apples-to-apples comparison of its own 3G coverage with AT&T’s confirms what the marketplace has been saying for months: AT&T failed to invest adequately in the necessary infrastructure to expand its 3G coverage to support its growth in smartphone business and the usefulness of its service to smartphone users has suffered accordingly. AT&T may not like the message that the ads send, but this Court should reject its efforts to silence the messenger.”

As it sees its hopes of a favorable court ruling in jeopardy, AT&T has tried to set the record straight among its own customers, writing them a letter asking them to ignore what it perceives as lies in Verizon’s ads. It writes that the Verizon commercials are “so blatantly false and misleading, that we want to set the record straight about AT&T’s wireless data coverage”. In the letter, the company highlights what it sees as abundant mixed coverage on its older EDGE and new 3G networks.

Regardless of whether AT&T’s dreams of silencing Verizon’s commercials come true, evidence indicates that the damage has already been done. In recent weeks Verizon’s brand image has soared while AT&T’s has sank according to Apple Insider, according to recent BrandIndex surveys by YouGov. The surveys looked at whether customers would recommend the respective telecoms to their friends. AT&T scored less than a -2 in the most recent study — indicating not many customers would recommend getting an AT&T phone.

Slanderous but still entertaining– check out the “Island of Misfit Toys” commercial: