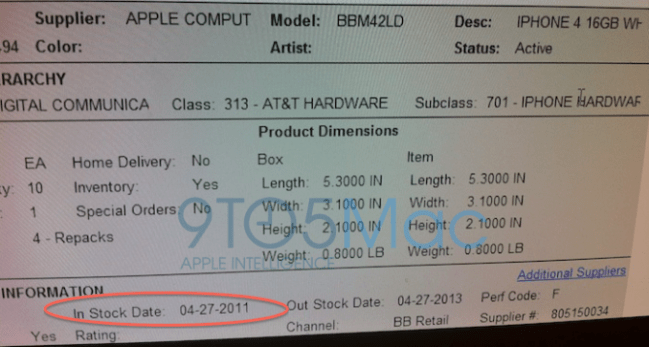 It might be hard to believe, but we may less than 48 hours from the launch of the white iPhone 4. Last week we learned that the fabled pale iPhone was set to debut in the U.K. this week. Now it looks likely that Best Buy will be offering the device beginning this Wednesday.

That news comes after leaked photos popped up on 9to5Mac that appear to be of a Best Buy inventory database. The screenshots indicate that a white iPhone 4 for AT&T’s GSM network will be in stock on April 27. Verizon customers, fear not; 9to5Mac’s sources say that a CDMA version is in the works, too.

If you’re interested in snagging the phone on launch day, you might consider arriving a bit early. According to reports, each Best Buy location will only have about 10 16GB models in stock initially. There’s no word on the number of 32GB expected to be on hand at Best Buy, but they’re expected to be in short supply.