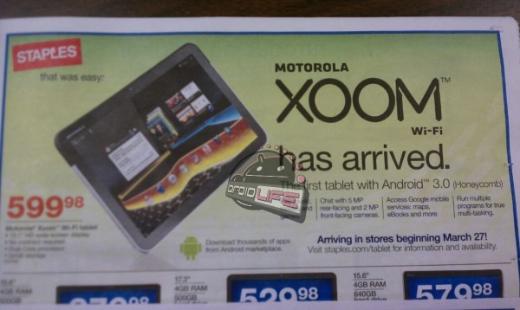 You’ve probably heard some really good things about the Xoom – with the exception of its price tag. We first heard last month that the Motorola tablet’s pre-order would be priced at $1,199. While that price tag was pulled and changed to $799, the Xoom still easily outpriced maybe of its competitors – most notably the reasonably affordable iPad 2.

And that’s something Motorola appears to be taking into consideration and will release its Wi-Fi model to $599 – at least at select retailers. Amazon, Best Buy, Costco, RadioShack, Staples, WalMart, and various Sam’s Club locations will be carrying the Xoom starting March 27 online and in stores, and it will match the price of the iPad 2.

If you’re considering picking up the Wi-Fi only Xoom to save a few bucks, don’t feel like your cheating yourself too much. The tablet comes fully-loaded with all the features of the 3G version, beside the obvious cellular connection. Xoom and Android proponents have claimed the Wi-Fi only version will be able to stand its ground next to the iPad 2 – but we still have to question whether it can catch up with the Apple tablet’s momentum, not to mention its pricing.

But the Xoom Wi-Fi might be the one to give iPad a run for its money. Up until this point, big name tablet manufacturers largely haven’t made Wi-Fi versions available. By packing all of the Xoom’s enviable and extremely hyped features into a more affordable price that directly challenges the iPad 2, we could finally see a real tablet war play out.

iPadOS 16 may not hit your iPad until October, says report