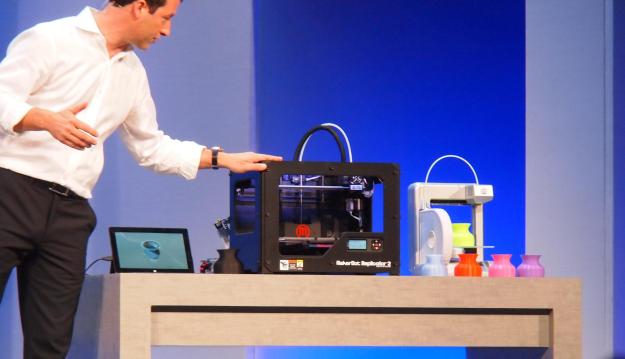 3D printing has picked up a lot of steam recently, and now a mainstream computer operating system supports it. At its Build 2013 developer conference, Microsoft revealed that Windows 8.1 will include native support for 3D printing through built-in APIs. This marks one of the more significant mainstream embraces of 3D printing in its recent history.

Microsoft’s vice president of Windows Web Services Antoine Leblond showed off the capabilities of 3D printing on Windows 8.1 while explaining the exclusivity of the OS support for the service.

“3D printing is super hot right now, and Windows 8.1 is the only platform to support it natively,” said Leblond. “This does not work on iOS or Android.”

Windows 8.1 will allow developers to put 3D printing capabilities into their apps. Leblond went on to demo a program that lets users shape a 3D object and print to a MakerBot Replicator 2. After showing off the app, a time lapse video of the printing process played and a pre-printed version of the object was produced in a TV cooking show-like fashion.

Continuing to show off the power of APIs built in to Windows 8.1, Leblond set the 3D printing aside and picked up a Lego Mindstorm rover, which he proceded to control over Wi-Fi on a Windows Surface tablet. Leblond sent streaming video from the tablet he was using to a tablet on the Mindstorm rover, showing off the capabilities of realtime APIs within the OS.