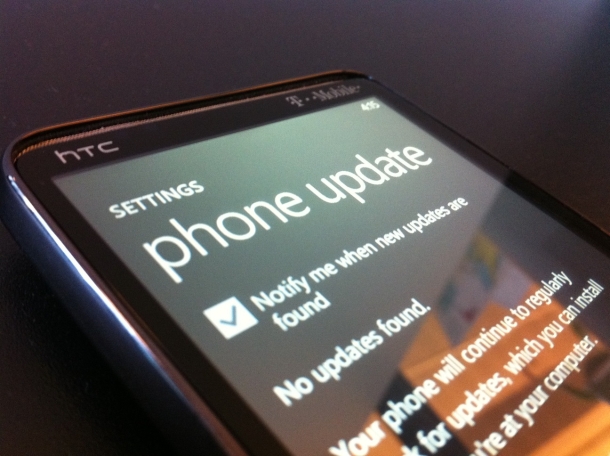 We already know that Windows Phone 7 hasn’t quite lived up to expectations, but there’s still hope in the shape of its imminent upgrade. LiveSide got wind that French enthusiasts sites predict the update may be here as soon as February 7. It’s codenamed “NoDo” (taking a swipe at Android’s own OS upgrade scheduling, the alias means “no donuts,” although this was refuted by a Microsoft employee) and thanks to CEO Steve Ballmer’s CES keynote, we already know it will bring copy-and-paste capability and generally improve app performance and marketplace search. There are also rumors that turn-by-turn navigation, multitasking, and custom ringtone functions will be added.

The timing seems right, since Ballmer is slated to speak at the Mobile World Congress on February 14. There’s also word that a second upgrade is already in the works, codenamed “Mango.” It would reportedly implement IE9, HTML5, Silverlight, and entertainment features. PhoneDog also notes that “Builds for Mango are in the 7500 range, meaning that it could end up coming out as Windows Phone 7.5.” But don’t expect to see Mango released closely to NoDo – it’s apparently going to be a large-scale upgrade.

All exciting things for Windows Phone 7, but they don’t negate the fact that the device is off to a bit of a disappointing start. A report today declared the phone “off to a slow start in fourth quarter,” and pointed out that the Windows Phone 7 was even bested by its predecessor, Windows Mobile. It hasn’t had the promising launch some thought or hoped it would, but we think Microsoft still has a chance to redeem itself with upgrades, provided they come soon enough to lure in new customers. Here are some of the features that the general tech community is calling for:

Topics
Video-editing app LumaFusion to get a Galaxy Tab S8 launch
Windows 10 hits 300 million active devices, but the free upgrade window slams shut soon
Turns out the Galaxy S7 and S7 Edge can move apps to the MicroSD card
Microsoft’s ‘bridge’ to bring Android apps to Windows has officially been axed
Windows 10 ecosystem review (Windows 10, Phone, Xbox)
We asked the experts if biological sex affects heart rate sensor accuracy
I still love my iPhone 14 Pro, but not for the reason I expected
The best iPhone apps to download in December 2022
Instafest app: How to make your own Spotify festival lineup
How old phones became the cool, good phones in 2022
The best Android apps for December 2022
The Galaxy Z Flip 5 might fix the Flip 4’s biggest design flaws
Don’t listen to billionaires like Elon Musk — app stores are fantastic