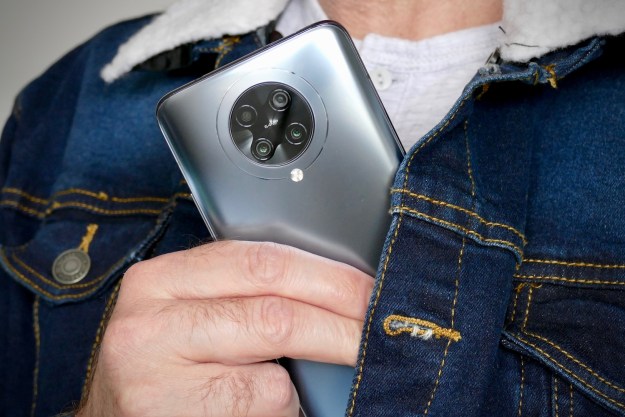 “The Poco F2 Pro has plenty of power and 5G support at an affordable price, but the camera can't compete with the best”

But wait, you’ve not heard of Poco? I can’t blame you. The company, which is part of the Xiaomi empire, first hit the headlines with the Pocophone F1 in August 2018, a competent smartphone with great specs and a low price.

Poco has released several devices since, but none have come close to replicating the allure of the original — until now. The F2 Pro looks like it has everything we liked about the Pocophone F1. But can it still compete not just with other flagship-killing hardware, but also the new low-cost, desirable smartphones around?

The Poco F2 Pro is similar in size to the OnePlus 8 Pro, and has the same aluminum and Gorilla Glass 5 construction, but with a slightly smaller 6.67-inch AMOLED screen on the front. A motorized selfie camera is used to keep the viewing area free from interruption, but this setup means a high overall weight of 219 grams. There’s also no IP rating for water or dust resistance.

That problem blighted the OnePlus 7T, and the similarities don’t end there. The rear camera is set inside a circular module containing four sensors, just like the OnePlus phone, while the flash unit sits outside it. I like the etched ring that runs around the camera module, striking through the flash unit as it goes. It gives the back of the phone some character, as does the curved X-like pattern on the surface of the module itself.

The rear glass has a matte finish. It’s seen here in the ordinary Cyber Grey color, but eye-catching purple and blue models are available, too. Although it’s not overly reflective, it does still attract plenty of fingerprints, and I’m disappointed to see it has collected an inch-long scratch already. This is a surprise, as due to lockdown restrictions, it has spent almost all of its time at home, not in pockets or bags. However, Poco does include a transparent silicone case in the box.

On the side is a power button and a volume rocker that are easy to locate and press, but the power button could use a different texture to go with its bright red color. There’s an in-display fingerprint sensor with an excellent placement, as my thumb connected with it almost every time without having to look for it or stretch. It’s reliable and gives a pleasing vibration when it is activated, but it’s not especially fast. The motorized camera does work for face unlock but only after swiping the screen up from lock, so it’s no faster than the fingerprint sensor.

I don’t think the Poco F2 Pro is stunning, but the circular camera module helps it stand apart from many other phones available today, and that’s a good thing. It’s a bulky thing at 8.9mm, which paired with the fairly high weight means it never feels svelte, but it’s comfortable to hold. Keen-eyed smartphone fans will recognize the Poco F2 Pro looks identical, both inside and out, to the less widely available Xiaomi Redmi K30 Pro.

Photo quality is adequate, but is not as good as it should be for these specs. Photos can lack dynamic range, and the camera does not enjoy challenging lighting situations, suggesting the exposure levels are off. The results are variable, and this inconsistency is frustrating. For every shot I liked, there were two that would need editing before being ready to share.

I do like the Macro feature. Often, these modes are hit or miss, with substandard focusing and quality, but the Poco F2 Pro focuses well with limited prompting needed from you, and the 5-megapixel sensor means the results are high enough resolution to be shared. Portrait mode has good edge recognition, but is affected by the varying exposure and dynamic range problems found in the main camera. I quite like the selfie camera, with the portrait mode blurring the background effectively.

The Poco F2 Pro’s price reflects the attention given to its camera tuning. It’s decent, but it can’t keep up with the OnePlus 8 or OnePlus 8 Pro.

You’re looking at a 20:9 aspect ratio, 6.67-inch Super AMOLED screen with 2,400 x 1,080-pixel resolution, complete with support for HDR10 Plus. It goes against a significant trend in the industry by not having a substantial curve down the sides. The Poco F2 Pro has a flat screen with only a slight curve to the glass around the sides which does not affect viewing or the displayed image.

By default, the screen has a cool palette, but is filled with detail. A good example of how this looks is in the BMW M3 CSL video on Carfection’s always beautifully shot YouTube channel. The car’s Silver Grey Metallic color takes on a stark, highly metallic tone compared to the less harsh silver shown on the iPhone 11 Pro’s screen. The low sun in this particular video is autumnal on the iPhone, and brighter, but less atmospheric on the Poco F2 Pro.

Dig into the Display settings and you can change the color palette to warm or cool, and even adjust the color gamut yourself. I was perfectly happy with the default setting, despite its overall coolness.

None of this is a criticism, and I like the screen on the Poco F2 Pro, which looks much better than you’d expect for a $500 smartphone. The audio is a little disappointing, however. Sound comes almost solely from a single speaker on the bottom of the phone, with only a slight fill coming from the speaker above the screen.

The Poco F2 Pro does have a 3.5mm headphone jack, and the sound quality through it is very good.

The software is Android 10 with MIUI 11 over the top onboard my Poco F2 Pro. Having recently come from reviewing the Xiaomi Mi 10 Pro and experiencing a few software problems, I approached the F2 Pro with some trepidation, but in true MIUI form, it is considerably better here than on the Mi 10 Pro. Why MIUI varies so much in its performance from phone to phone, even when technically quite similar, remains a mystery.

Yes, the software experience on the Poco F2 Pro is solid. It’s reliable and stable, and notifications are delivered without fail, even appearing on the ambient screen when the phone is locked. It may sound silly to point these out as positives, but with MIUI, anything can happen. I haven’t been frustrated by the Poco F2 Pro.

MIUI’s aesthetic is pleasing, with a simple layout and design which deviates from Android’s look on the Google Pixel, but not in an annoying way. The notification shade, gesture controls, app drawer, and settings screen are all very close to what’s used on the best versions of Android elsewhere. The overall speed is good too.

It’s not perfect, though. Edge recognition is poor, even though the screen does not have a strong curve. Palm rejection is the main problem, and simply holding the phone naturally would sometimes stop the keyboard from recognizing inputs. I don’t like the many extra apps and features MIUI adds, such as its security center, extra browser, and system cleaner, plus I don’t need eBay, WPS Office, and LinkedIn’s apps to be pre-installed either.

The Poco F2 Pro has a Qualcomm Snapdragon 865 processor inside with either 6GB or 8GB of RAM, depending on the model you buy. My review model had 6GB of RAM. I played Asphalt 9 Legends without any problem, and enjoyed the shooter 1945, which highlighted the pleasing haptic feedback delivered by the F2 Pro. Here are the benchmark results:

The scores are nearly identical to the OnePlus 8, which has the same processor, and improves on the Exynos-powered Samsung Galaxy S20. Considering the price difference between these three phones, if you want a phone for casual gaming, rather than photography, the Poco F2 Pro makes good sense.

The 4,700mAh battery has serious legs, making it even more of a gamer’s friend. Even though my phone has remained mostly connected to Wi-Fi, it still had to deal with social media, apps, video calls, photos, video, and some gaming. Despite this, most days end with more than 50% remaining.

Included in the box is a 30W fast charger. After 20 minutes the phone went from 3% to 41%, and on to fully charged in close to an hour and 10 minutes. That’s excellent charging performance.

The Poco F2 Pro comes in two different versions, a 6GB/128GB model and an 8GB/256GB configuration. The 6GB/128GB Poco F2 Pro can be purchased in the U.S. through an importer like Gearbest, where it costs $499. In the U.K. the phone is available in the higher specification officially through Xiaomi’s online store for 549 British pounds, or about $689.

Warranty coverage depends on where you purchase the phone. Some importers do provide a warranty, so check before buying. In the U.K., Xiaomi provides a two-year warranty on its devices, which covers the Poco F2 Pro, and protects against manufacturing defects.

There’s plenty going for the Poco F2 Pro outside of the very competitive price, with the long battery life, fast charging, attractive screen, and strong overall performance making it a tempting proposition. However, the camera is inconsistent, and the software needs improvement in a few areas.

The Poco F2 Pro’s close competitors include the $700/600 British pound OnePlus 8 and the $700/549 British pound Motorola Edge. If you aren’t settled on Android, consider the $700 Apple iPhone 11. The OnePlus 8is hard to ignore, as it has a similarly excellent screen and a fast processor, combined with a better camera and better software, too.

We’d also suggest looking at two of the strongest low-cost, capable smartphones available at the moment – the Apple iPhone SE and the Google Pixel 3a. Both cost $399 and perform very well, with the camera on the Pixel 3a really standing out, and the overall performance and design of the iPhone SE making it a winner. The Poco F2 Pro represents great value, but it’s not as polished as either of these highly recommended smartphones.

It’s important to note the Poco F2 Pro is identical to the Xiaomi Redmi K30 Pro, which is not widely available outside China, and unlike the F2 Pro, may not come with the same access to Google Play should you purchase it for international use.

The Poco F2 Pro is not water-resistant and does not have a durable body. It does come with a case inside the box, which I suggest using if you want to avoid the scratches my review phone has already picked up. Xiaomi does update MIUI on a regular basis, and MIUI 12 is scheduled to arrive at some point in the future, but version updates of Android will take longer to arrive.

That said, due to the great specifications the Poco F2 Pro should remain fast and capable for several years, plus it has 5G too. While 5G isn’t widespread at the moment, it’ll become so in the future, and the Poco F2 Pro represents a great value way to get next-generation connectivity now.

No, you should buy the OnePlus 8 instead if you want a high-performance, reasonably-priced smartphone that’s convenient to buy. This is mostly down to the software experience, which is excellent on the OnePlus, and the camera tuning. Outside of this, the Poco F2’s long battery life, strong processor, and attractive screen does make it a very good value if you’re looking for something different.