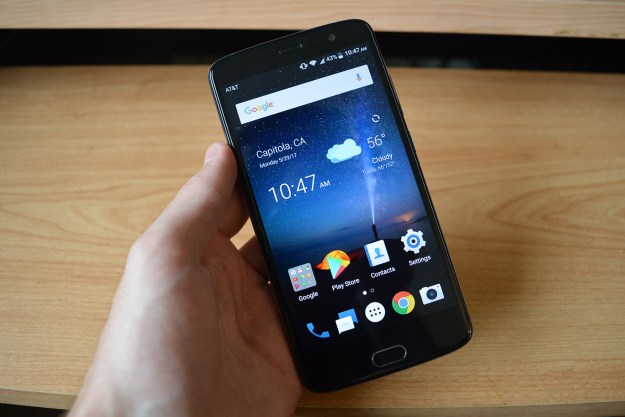 “The ZTE Blade V8 Pro proves you don’t necessarily have to buy a crappy phone if you’re on a budget.”

While Samsung and Apple compete over high-end flagship smartphones, the mid-range business is lively with plenty of competition. Almost all smartphone manufacturers have solid mid-range offerings, but some rise above the rest. The Lenovo Moto G5 Plus is often considered the best phone in the sub-$300 category, while the $250 Huawei Honor 6X gets an honorable mention for its slightly larger display.

With the Blade V8 Pro, ZTE is vying to make the short list of mid-range kings. Debuting earlier this year, the Blade V8 Pro comes at the same price as the Moto G5 Plus, although with decidedly different specs. It also offers the same 5.5-inch display size you can find on the Huawei Honor 6X.

How does it fare? For its competitive price, the Blade V8 Pro certainly is capable, and it just may dethrone the Moto G5 Plus. Let’s take a closer look.

The Blade V8 Pro doesn’t look bad, but it’s not unique by any means. On the front of the phone, you’ll be greeted with a very standard look. There’s a home button on the front, and it doubles as a fingerprint scanner — we found the fingerprint scanner worked reasonably well most of the time. Perhaps once every five attempts, we would have to rescan – but that’s not a terrible strike rate.

On either side of the home button you’ll find two lit-up dots, which represent the back and multitasking buttons. If you’re new to Android, this can be a little confusing. The back button lives on the left, while the multitasking button is on the right – not everyone knows that by instinct, and it may take some time to get used to the layout.

On the bottom of the phone, you’ll find a USB Type-C port, along with speaker and microphone grills. On the left is a dual-SIM tray, while the right edge houses the power button and volume rocker – both are in easy-to-reach spots.

The back of the phone does away with the metal build found on other higher end ZTE phones in favor of a textured, plastic surface. We like it, not just because it’s scratch-resistant, but it also gives the phone a little more grip, ensuring that you won’t drop it easily. That’s helpful considering the device doesn’t have any official water-resistance rating, so you’ll want to be careful not to drop it around any pools. On the back, you’ll also find ZTE has jumped on the dual-lens camera trend.

There’s nothing really unique with the Blade V8 Pro’s design, but at least it looks better than the Moto G5 Plus.

You can’t expect to get a flagship-level specifications for $230, but you should expect to get something that’s capable for day-to-day use. Our ZTE Blade V8 Pro review revealed a phone that more than achieves that.

The user interface is smooth, and standard functions like pulling up the app tray or accessing quick settings are responsive and quick.

Under the hood, the device comes with the Qualcomm Snapdragon 625 processor, along with a healthy 3GB of RAM. You’ll get 32GB of storage, though you also have access to a MicroSD card slot for more storage expansion should you see the need. There’s also NFC, which means you can use Android Pay — something you can’t do on the U.S. model of the Moto G5 Plus.

The LCD display isn’t going to break any records, but it does the job. At 5.5-inches and a resolution of 1,920 × 1,080-pixels, the screen offers a respectable pixel-density of 401 pixels-per-inch. It doesn’t beat the 5.2-inch Moto G5 Plus’ 424 pixels-per-inch, but in real world use you’re unlikely to see a huge difference between the two. The screen offers plenty of brightness to see outside, even in direct sunlight.

On the performance side, you will run into some stuttering if you play power- or graphics-intensive games, but for general use it’s quite capable. The user interface is smooth, and standard functions like pulling up the app tray or accessing quick settings are responsive and quick, even after some serious multitasking.

When it comes to benchmarks, the phone performed as expected. Here’s a quick rundown of the scores we achieved:

To put things into perspective, the Samsung Galaxy S8, which is one of the highest-performing phones out there today, scored a hefty 205,284 in AnTuTu. The Lenovo Moto G5 Plus, with 4GB of RAM, scored 63,190 – you can expect comparable performance. It beats out the Huawei Honor 6X, which scored 56,585 with its 3GB of RAM and Kirin 655 processor.

For our ZTE Blade V8 Pro review, we ran games like Landing Confirmed largely without a hitch, and while you may run into some lag every now and then, it isn’t enough to warrant alarm. The phone does run a little warmer with slightly more graphics-intensive games like Asphalt 8, but to our surprise we didn’t have many issues running it.

The dual 13-megapixel camera set up on the rear of the Blade V8 Pro allow for ‘bokeh’ and monochrome effects — there are better phone cameras out there.

Compared to high-end phones, the photos lack a dynamic range, and the camera suffers in low-light situations. Still, what ZTE lacks in camera quality, it makes up for in features. The camera app allows you to adjust the blur effect after the shot — though it’s not very good — or you can isolate colors in photos. There’s also a built-in Live photo mode, which lets you create a short GIF similar to Live Photos on the iPhone. A full manual mode allows you to adjust the parameters of your shot on the fly.

The camera has decent white balance, but it’s easy to see details aren’t as sharp in photos. Again, the camera quality here isn’t anything to write home about, but on a phone in this price range, it does relatively well.

ZTE has avoided going the route of a heavy Android skin by delivering a somewhat vanilla Android experience – that’s a good thing.

The battery will last you a little more than a full day of use.

There are a number of pre-installed ZTE apps on the device, including “Browser,” which also happens to exist alongside a pre-installed Chrome. The extra apps are often redundant — WeShare and Dropbox come pre-installed — and you can often find the Google equivalent. Still, a few extra apps aren’t anywhere near the level of bloatware you could find on a phone like this.

There are only a few tweaks to the user interface from stock Android, but they are useful. For example, you’ll have access to a huge range of quick-access settings in the settings tray, and the settings menu has a “frequently used” section that’s much easier to navigate through than the full settings menu. They’re small changes, but they help ZTE distinguish itself a little without being to intrusive.

The only major downside here is how the software is outdated. The phone comes with Android 6.0.1 Marshmallow, and it doesn’t seem as though an update is in sight. If you’re looking for a phone that’ll get quick and regular updates, this is not the right one for you.

The battery on the Blade V8 Pro is a hefty 3,140mAh, and it’ll last you a little more than a full day of use. In our tests, the phone had around 30-40 percent of battery left after a full day – which is pretty good. We’re power-users too, so light to average users may end the day with more.

The device wasn’t necessarily as good when left on standby over a few days — around the third day, it had 30 percent left.

The Blade V8 Pro charges via a USB Type-C port, which is better than the MicroUSB port on the Moto G5 Plus. It’s a reversible port, and your phone should charge faster.

ZTE offers a standard limited warranty for its devices that will cover your phone from manufacturing defects for one year from the date of purchase.

The phone comes in at $230 on ZTE’s website, but you can also buy it for the same price on Amazon. It’s a pretty good price for a phone with these specs – it even offers more than the Moto G5 Plus.

The Blade V8 Pro is only compatible on GSM networks, meaning it will work fine on AT&T and T-Mobile, but you’ll have to opt for another phone if you’re on CDMA networks like Verizon and Sprint.

The ZTE Blade V8 Pro proves that you don’t have to buy a crappy phone if you’re on a budget. It’s a good performer, and it helps that the battery lasts a decent amount of time.

It doesn’t have the latest version of Android, and it likely won’t get timely security updates, but it’s a fraction of the cost of flagship smartphones — some of which take just as long with updates.

If you have the money to spare, decide whether you want a reversible, faster charging port, and the ability to use Android Pay — those are two features you’d lose with the G5 Plus. On the other hand, you get a better software experience with Android 7.0 Nougat, somewhat faster updates, and a slightly better camera.

The ZTE Blade V8 Pro should last at least two years – which is the standard lifespan of a smartphone these days. Towards the end it may slow down, especially if ZTE doesn’t keep up with updates.

Yes. If you’re on a tight budget and need a capable, reliable Android phone under $250, the Blade V8 Pro is the phone to get. If you’re into quick Android upgrades and security updates, this phone isn’t for you.