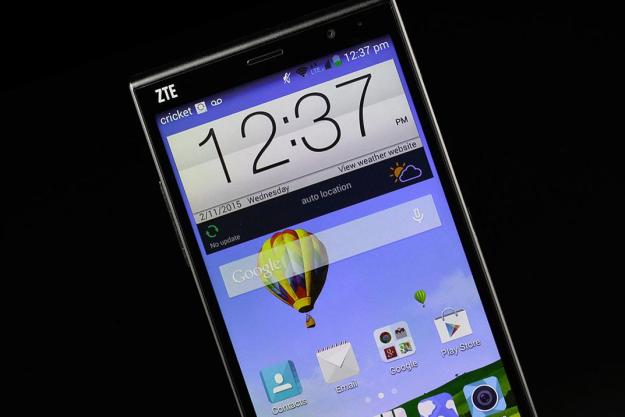 “At just $220, the ZTE Grand X Max+ is for those who want the luxury of a large screen without shelling out the big bucks. Its slow processor remains a hidden cost.”

ZTE may be a name few recognize in the world of smartphones, but it’s actually one of the largest smartphone manufacturers in the United States, building many unbranded devices for carriers and other companies. However, the Chinese manufacturer is looking to get some recognition with its ZTE Grand X Max+, a 6-inch phablet that’s less than one third the price of a Galaxy Note 4. But can the Max Plus hold up against its more expensive, well known peers, or is it a phablet flop waiting to happen?

At first glance the ZTE Grand X Max+ is a smartphone as unwieldy as its name. While ZTE managed to pack a massive 6-inch display into a phablet just 7.9mm thick, the phone’s design lacks any sense of ergonomics or functionality. The large, rectangular design is just about impossible to hold comfortably in your hand due to its large, sharp corners and the glossy, wax-like glass finish on the front and back of the phone is a fingerprint magnet that begs you to put it in a case before you end up dropping it. Although it tries to come across as sleek, the Max+ is one of the most unwieldy phones we’ve ever seen. The power button is at least placed on the side of the device in the middle so that you don’t have to stretch your fingers too far to unlock it.

The phone runs Android 4.4.4 KitKat with a minimalist, AOSP-esque look, blending Android’s simple, straightforward interface with some added treats. The lock screen is customized with quick app selections for easy access, and the home screen borrows features from both Samsung and HTC — its wallpaper is a lot like Samsung’s and its flip clock bears an uncanny resemblance to the iconic HTC Sense Clock.

For added flair, ZTE also threw in transition effects that you can choose when switching between pages on your home screen. It’s nifty, but also at times nauseating, especially when the processor chokes on an animation and the frame rate drops right before your eyes.

The Max+ may have an exterior that’s difficult to swallow, but overall it’s a fairly clean Android experience that shines bright with vivid colors and simplistic design that works for Android beginners and experts alike.

A dated, but crisp display

One major caveat with the ZTE Grand X Max Plus is its display. While similarly sized devices like the Samsung Galaxy Note 4 and Google Nexus 6 have already jumped into the world of Quad-HD resolutions, featuring 1440p displays, the Max Plus has a 720p display on its massive 6 inches of real estate.

While the colors remain vibrant and images crisp, everything still looks dated and cartoonish due to the extremely low pixel density, which is about half that of Samsung’s Galaxy Note 4. The look isn’t necessarily pixelated, but it will look distinctly different and less vivid than a full Quad-HD display. We expected at least a 1080p display for even a budget-oriented phablet, but 720p isn’t too bad when you consider the budget price, the fact that the display has Corning Gorilla Glass 3, and everything else packed into this device.

Under the hood, the Max+ is powered by an older Qualcomm Snapdragon 400 1.2GHz quad-core processor (the same one in phones like the Moto G. Other phablets, like the Samsung Galaxy Note 4, are powered by a much faster Snapdragon 805 2.7GHz quad-core processor. Benchmarks reveal just how big a gap in performance the Max+ is from flagship phablets, scoring just 8,300 on Quadrant compared to the Note 4’s score of 23,000. In a graphics benchmark with 3DMark’s Ice Storm Unlimited test, which rates graphical capabilities, the Max+ scored just over 4,000 while the Note 4 scored nearly 20,000. This amounts to a lower frame rate in everything from gaming to navigating the UI.

For a budget smartphone, this processor is about what we’d expect to get for around $200 in 2013. For 2015, ZTE is pushing the limits of this processor in its Max+. The processor just isn’t fast enough to handle the interface ZTE put into the phablet. We’ve observed the frame rate drop consistently when moving around the home screen, especially when using ZTE’s custom transition animations. But if you can get past these hiccups, the Max+ will still, in any case, serve you well. The device does at least have 2GB of RAM to help keep the pep in its step, as well as 16GB of internal storage for all your games and pictures.

A Great camera held back by hardware

The camera app ZTE included also offers plenty of software functions, including HDR. However the camera app itself is very laggy given the weak processor, and taking photos with HDR enabled will make the phone freeze for quite a few seconds to process the image. It’s also difficult to review photos on the camera, as their extremely high resolution will look pixelated on the 720p display. Zooming in will let you see the finer details.

Due to the phone’s ergonomics, taking photos with the camera can take some getting used to. The lack of OIS also requires a steady hand when shooting with this phablet. After some practice you’ll still get great, rich shots that compare to even flagship smartphones. We’re not saying this phone is a perfect match for photophiles, but for a $220 smartphone the camera leaves us impressed.

It’s also worth noting that the budget-minded ZTE Max+ is available exclusively at Cricket Wireless, an AT&T-owned budget carrier. For $50 a month you get 5GB of data with unlimited talk and text – though 4G LTE speeds are capped at 8 Mbps and HSPA+ (Regular “4G”) speeds are capped at 4Mbps. The company piggybacks on AT&T’s network, meaning that while Cricket Wireless service will be more reliable in suburban or rural areas compared to Sprint or T-Mobile. On the other hand, your speeds will also likely be slower in high-use areas like NYC. We’ve observed speeds below 1Mbps for LTE during peak hours on Cricket Wireless. This is something to keep in mind if you’re considering the Max+ as you can only buy it through Cricket.

One area the ZTE Max+ stood out in was the phone’s battery performance. With a 3,200mAh battery, this phablet already has one of the largest batteries on the market, something most expect from phablets due to their larger size and space for a bigger battery. However, devices like the Galaxy Note 4 and LG G3 sometimes suffer in battery life due to their excessive pixel resolutions and powerful processors, sucking away precious battery life. The ZTE Max+, with its 720p display and older, slower processor, lasts even longer than both these phablets, easily surviving two days of modest use before recharging.

As an added bonus, the ZTE Max+ also features Qualcomm’s Quick Charge technology. It’s only the 1.0 version, as opposed to the faster 2.0 version on Samsung’s Galaxy Note 4, but it does, according to Qualcomm, charge up to 30 percent of your battery life in 30 minutes.

In the end you get what you pay for, and with the ZTE Grand X Max+ you pay very little for a whole lot of hardware. We’re not sure what magic ZTE conjured to make a 6-inch smartphone with great battery life and a 13-megapixel camera for $220, but we remain impressed. Sure, the ZTE Max Plus can’t outpower the Samsung Galaxy Note 4, Google Nexus 6, or probably any other flagship phablet, but for $220 there’s nothing out there quite like it.