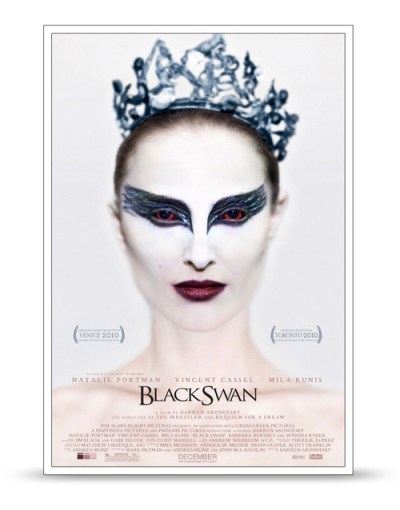 I absolutely loved Black Swan. I’m just not sure I can accurately say that I enjoyed it. When I first walked into Black Swan, I wasn’t sure what to think. When the movie was over and I walked out, I still wasn’t sure what to think. Despite how that might sound, that is not a criticism, but rather high praise for director Darren Aronofsky (The Wrestler, Requiem for a Dream), and Natalie Portman, who present a movie that is complex, compelling, and never ordinary. It is also one of the year’s best.

Aronofsky walks a thin line between madness and genius in his movies, and you are never really sure which side he spends more time on. His previous films can justifiably be classified as being disturbingly brilliant, or brilliantly disturbed depending on your point of view, and Black Swan is no different. His movies are not what you might describe as being “feel good”, but they all are capable of evoking reactions in the audience. That reaction may not always been what they want to feel, but it is always deliberate, and always well done. Aronofsky’s films are not always well received (especially The Fountain, which was critically and commercially panned), but they can be respected for what they attempt.

Black Swan is an easy Oscar candidate in several categories. Aronofsky is deserving of a nomination, it will be a shock if Portman does not also receive a nomination, and many of the crew and supporting cast turn in performances that are noteworthy, including Vincent Cassel and Barbara Hershey. It is a film worth seeing, and one that is easily among the best of the year. But it is not a film that you will have fun watching, nor was that the intention.

The film revolves around Natalie Portman’s Nina Sayers, a woman who has dedicated herself so completely to the ballet and the art of dance, that it has stunted her development in many ways. She is cold and isolated, and has difficulty relating to people, while still retaining a purity and naivety that teeters between innocence and cowardice. She is afraid of everything, but has no idea why. Fueling this repression is Nina’s mother Erica, a former dancer who achieved only moderate success, and now lives vicariously through her daughter.

When it is announced that the star of the show, Beth MacIntyre (Winona Ryder) has been made to retire, the remaining dancers all compete to win the coveted role of the Swan Queen in the first production of the season, a role that will elevate the dancer to fame.

The show’s director, Thomas Leroy (Cassel), chooses Nina because of her near perfect mastery of the movements, yet has serious reservations.  The character of the Swan Queen is dual in nature, and while Nina can easily handle the White Swan’s role, Leroy worries that she may be incapable of releasing herself enough to truly become the seductive and dangerous Black Swan. In an attempt to coax her out of her shell, Leroy begins a series of mind games that are intended to relax Nina, and challenge her.  One of these challenges involves bringing in the dancer Lily (Mila Kunis). Where Nina is the perfect technician without the passion, Lily is all passion with sloppy technique.

As Nina attempts to express herself as the Black Swan, the pressure of the role begins to manifest itself in increasingly intense ways that range from visions to physical wounds, and as the opening date nears, Nina battles an increasingly personal and psychological battle against those around her, while attempting to explore her own place in the world.

The price of perfection

Portman delivers what is arguably the best performance of her career, and one that deserves at the very least an Oscar nomination, if not the win. Nina is a character that should be the background to a larger story, but in Black Swan, the cold and lifeless girl becomes the nexus from which everything begins and ends. Portman disappears so completely in the character, that despite how odd and repressed Nina is, and despite the fact that she rarely speaks to anyone other than her controlling mother, you grow an attachment to the character. You pity her and you feel for her, but you are also frustrated and annoyed by her reluctance to embrace her opportunities.

The actual dancing also plays a major role in the film, and Aronofsky approaches it in such a way that without wasting much time in lengthy explanations, you understand the logic of the ballet and its insulated world. Part of this is due to Portman, who does almost all of the dancing herself and treats the movements as an extension of Nina’s expression. With the help of Aronofsky, the acting of the supporting cast, and the complete way in which Portman threw herself into the role, even those that have no love for the ballet will understand through the movie what Aronofsky wants you to see. When Nina begins to dance, you can see the stiffness and frigidity her character emanates, and when Leroy demands that she show her passion as the Black Swan, you can see where Nina fails.

This early buildup is perhaps the only flaw in Black Swan. The film begins at a pace that allows the audience time to acclimate to Nina and the world she lives in, which requires a bit of patience. This seems an intentional decision to slow the movie down in order to build the tempo towards the end. It works, but the first act of the film might test the resolve of many. In comparison, the final act feels like a different film that was laid on the groundwork of an earlier movie, and that is a compliment.

To understand Nina, you must also understand her mother Erica, played by Hershey, another role that could easily justify an Oscar nomination. Erica is a woman who is living a life through Nina that she feels was denied to her when she was forced to quit to give birth to Nina. There is a menace and a resentment to Erica, but it is also tempered by love for her daughter. But it is an unhealthy and smothering love that is blurred between her daughter, and her daughter’s dancing, and it is never clear if Erica can make a distinction.

The supporting cast, especially Kunis and Cassel also offer compelling performances, and both are tools that Nina is either knowingly, or unwittingly feeding off as she attempts to embrace her Black Swan.

The myth of perfection

The movie hits its stride about 3/5 through, as Nina begins to change, both physically and mentally. She undergoes a form of mental torture that she subjects herself too, and this is where the genius and madness of Aronofsky shines. The director creates a world around Nina that is both familiar and yet wrong. Everything is suddenly being questioned, and both Nina and the audience will be left wondering what is real and what is not.

Nina’s rashes begin to turn to bloody scratches, and a glances in the mirror show a reflection of another Nina scratching the rash with glee. A second look and the scratches are just a rash. Moments of comfort become utterly menacing as the world begins to take on an alien feel and Nina is forced to keep moving forward or risk losing everything she has ever worked for. Everything becomes something to question, and nothing can be taken for granted.

Then everything explodes, and the film begins hurtling toward the climax like a runaway train. Aronofsky never stops to let you think about what is going on, instead he assaults you with a rapid fire series of incidents and images that are bizarre and increasingly disturbing. When the movie finally comes to its amazing, yet somewhat bizarre ending, the audience will be left feeling both breathless and confused. And that is the brilliance of Aronofsky and a testament to Portman.

Black Swan is film about the price of beauty, and the intensity of perfection. It is both beautiful and devastating, and brilliant while having moments that are difficult to watch. Aronofsky knows exactly what he wants, and like a hand crafted watch, if one piece had not worked correctly, the rest would be marred by it. But the pieces work perfectly, and the result is one of the best films of the year.

Black Swan is highly recommended, and while you may not leave the film feeling happy, you should leave it feeling fulfilled.

Beautifully filmed. Masterfully acted. A story that takes your hand then forces you to sprint with it to the conclusion. One of the best films of the year.

The pacing at the beginning might cause some minds to wander. Not a movie you will throw in the DVD and watch repeatedly.

Apollo 10½ review: A charming blast into the past
Moon Knight review: Oscar Isaac shines in scariest Marvel series to date
Black Widow review: Bold, beautiful, and better late than never
‘Black Panther’ review
Everything we know about Ant-Man and the Wasp: Quantumania so far
Most powerful Star Wars villains ever, ranked
Paramount+ launches Peak Screaming collection for Halloween
Everything Everywhere All at Once’s Larkin Seiple on the feel-good movie of 2022
Meet Cute review: Peacock’s time travel rom-com falls flat
Heardle today, September 23: Answer, hints and help for song of the day (Friday)
Framed today, September 23: Answer and hints for the movie of the day (Friday)
The best Roku TVs of 2022: which should you buy?
Don’t Worry Darling review: through the suburban looking glass