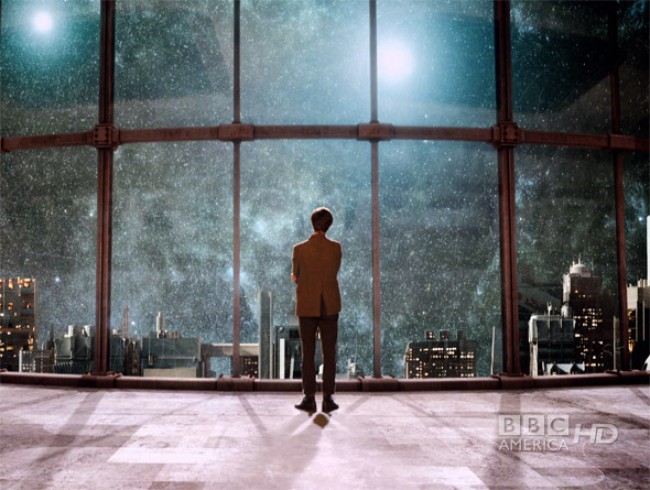 The Doctor returns! To call Doctor Who a cult classic really doesn’t do it justice. Doctor Who is the original cult classic, without question. I look forward to your corrections, commenters.  The show first began on black and white sets across Great Britain, when a curmudgeonly old man with a fantastic alien ship and a slightly annoying granddaughter sort of accidentally kidnapped two schoolteachers, and a legend was born. Sure it may not have had the best special effects, and sure there were a handful of seasons best forgotten (it wasn’t really Colin Baker’s fault…), but the show has been a staple of life to many of us that proudly stand under the geek flag.

And now, just two and a half years shy of its fiftieth anniversary, Doctor Who returns, and does something it has never done before. It comes to America.

Technically there have been a handful of episodes set in the States, but the season opening two-parter marks the first time that the show has been filmed in the U.S. Depending on how you count it, the sixth, or the thirty-second season will debut on both BBC America and the other BBC across the Pond, on April 23.

The season opens with an episode filmed in Utah’s Monument Valley. BBC describes the episode thusly:

The Doctor (Matt Smith), and his companions Amy (Karen Gillan) and Rory (Arthur Darvill), find themselves on a secret summons that takes them on an adventure from the desert in Utah – right to the Oval Office in 1969.

The episode will conclude the following Saturday, and the series will run for seven episodes in total before taking a hiatus until whenever the BBC decides to chuck the remaining six episodes at the public. For those that aren’t into British television, assuming there are any of you weirdos out there, the BBC takes a more eclectic approach to TV programming. Those wild Brits won’t be held down by crazy little things like a schedules, or logic when it comes to bringing back popular shows. Doctor Who, one of the BBC’s most popular shows, has always launched in Spring since the show was brought back to life in 2005. That tradition continues, but this season will be the first time that the show has split the season.

Stephen Moffet returns as showrunner with Matt Smith returning as the Eleventh Doctor. Karen Gillan returns as Amy Pond, and Arthur Darvill joins the cast full time as Rory. But if April is too far away, the Doctor and crew will appear in the upcoming Comic Relief special on March 18, in two four-minute episodes, titled “Space” and “Time”. No word on whether or not the show will air in America, but odds are the clips will be posted online.

With The Adam Project, Shawn Levy steps into the spotlight