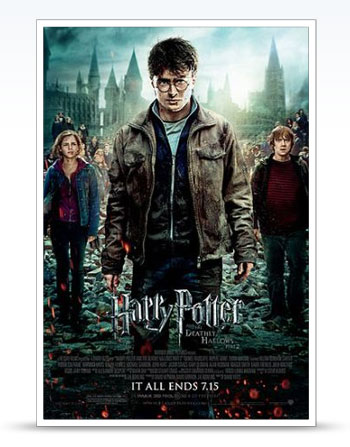 It is something of a bittersweet realization that after ten years, the Harry Potter films have come to their conclusion, and the character will never again grace the big screen — excluding Lucas-style special editions and the possibility that a rabid fan will go Misery on J.K. Rowling and force her to write an eighth Harry Potter book. Barring that, the franchise ends on a high note, albeit a slightly muted one.

It has been an odd and nearly unparalleled experience watching the cast of Harry Potter grow through the years. And as the actors matured and grew into their roles, the series itself also matured. The tone became darker, and the stories grew more complex. The style changed as well, partly due to the deepening plot, but mostly due to the change of directors. For the final outing, David Yates returns behind the lens of Harry Potter for the fourth time, and his style has become very distinctive, as has his view of what Harry Potter is all about.

Yates is not into the spectacle of Harry’s world as the original Potter director, Christopher Columbus was, nor does he emphasize the magical nature as Alfonso Cuaron did in Prisoner of Azkaban. He is closer to Mike Newell (who directed Goblet of Fire) than to the other two, but still, Yates has his own way of seeing things. He is a character director, and as a result the emphasis is on Harry’s journey more than anything else. That makes the journey and the conclusion satisfying, but at the cost of the epic scale of the final battle.

Deathly Hallows — Part 2 is not so much a sequel as it is just a continuation of Part 1. Rather than having its own three-act structure, Part 2 essentially begins during the middle of the second act, which began in Part 1. If possible, watch Part 1 immediately before watching Part 2. It will make more sense in terms of the narrative flow.

The movie begins without much introduction. It picks up immediately where Part 1 ended and hits the ground running. Without spoiling too much for people that haven’t read the books, Harry (Daniel Radcliffe), Ron (Rupert Grint) and Hermione (Emma Watson) continue to hunt the horcruxes that are keeping Voldemort (Ralph Finnes) alive, while around them the war is over, and he-who-must-not-be-named has won.

If you watched the first film, then you know everything you need to know about the plot of the second. All of the exposition and setup was dumped into Part 1, leaving Part 2 to focus on the climactic confrontation and final battle, which occupies more than the last hour of the film. There is very little fat on this film, which is both a good and bad thing. Part 1 was nearly all set up, so many of its faults were overlooked, and rightly so. It had moments that dragged, and there were very few action scenes to break up the monotony of the months the characters spent on the run. Part 2 does not have that problem at all. In fact, the events in the film all take place over the course of a few days.

3D is not always a good thing

At times, this film looks better than it has any right to. There are shots that are simply beautiful, and the visuals are almost a character in themselves. As with the previous films, Yates uses the colors of the world to convey emotion. The majority of the time the film looks grey, with occasional blue hues, until a pivotal change happens and colors explode into the scene. It is almost the exact opposite of Columbus’ visual style, which was loaded with rich and lush colors.

While that may make for an interesting visual look, it is not one that works well with 3D. Part 2 is a visually dark film. The majority of it takes place at night, and one lengthy scene set during the day is all filmed in a dark setting. Mix that in with Yates’ use of monochromatic hues and the intended bleak look becomes muddy and hard to distinguish.

There are some impressive visual effects and great looking shots. Do yourself a favor and see it in 2D so you can actually appreciate it.

Part 2 marks the fourth Harry Potter film for director David Yates, which means that quietly, Yates has become the most influential person for the entire series in terms of visual look and style. Yates is a director who loves to focus on the character development and emotional side of events above all else. He works well with actors, has the ability to get memorable performances out of his cast, and Part 2 is no exception. From the stars to the cameo shots, every actor in the film does his or her job well, and a good deal of credit for that has to go to the director.

Yates squeezes all the emotion out of an already emotionally charged finale, and the moments that work best are the quiet ones. Without getting into spoilers, there are several scenes towards the end when puzzle pieces fall into place, and the truth about past actions come out. Those are among the best and most memorable moments of the film, and if you haven’t read the books, then they may even shock you and make you rethink how you have judged some of the characters. He also uses flashbacks from previous movies, as well as flashbacks to previously unseen events, and he does so masterfully. In one instance in particular, Yates tells an entire story through a few brief flashbacks, and in the course of those few minutes the entire story changes.

Where he stumbles is the action. Yates has never been a strong action director. In both the Half-Blood Prince and The Order of the Phoenix, major battles from the book were neutered under Yates, and ended up being overshadowed in favor of the emotional side of what happened during those battles. In fact, in Half-Blood Prince, the climactic battle from the book was totally removed from the film, which was a baffling decision. Not only would it have made for a good conclusion to a somewhat slow-paced film, it made sense in the structure of that story to have a fight at the end, yet Yates cut it entirely.

In Part 2, there are still some good action scenes, but most of them occur in the background. Granted, to recreate the entire final battle would probably tack on another hour and cost an additional $100 million or so, but at 130 minutes, Part 2 is already the shortest of all the Potter films, and it could have easily added 20 minutes of the fighting that has been building up for the last seven films.

The idea is to keep the focus entirely on Harry, and so other characters which play a significant role in the final book are relegated to the background. Even Ron and Hermione seem to disappear for huge chunks of time — in one scene they are actually just sitting down while the battle is raging, as if they don’t exist until Harry arrives.

The final battle is underwhelming to say the least, and major characters to the series are left with stunted epilogues that don’t do them justice. There is one fight in particular between characters that aren’t named Harry Potter, but it is almost an afterthought, and the emotional context is mostly missing.

This is the battle we have all been waiting 10 years to see (15 for fans of the book), and yet it is just something that sort of happens in the background. The Deathly Hallows Part 2 is still a good movie, but it is underwhelming and lacking in certain areas. That being said, there is still plenty of action to enjoy, and the final confrontation between Harry and Voldemort is fun to watch.

Harry Potter and the Deathly Hallows — Part 2 is a suitable ending to the beloved franchise, and one that will make a lot of fans happy. However, it will also leave a lot of fans wanting more, due to the decision to shift the focus of the final battle away from the battle itself towards a greater emphasis on the characters. That makes sense, but at the same time, it would be somewhat akin to re-making Return of the King, but instead of showing the Battle of Minis Tirith, focusing almost entirely on one character that is inside the city and only fleetingly involved in the battle.

The 3D is also a problem. Since the action scenes are not the major focus, the inclusion of 3D isn’t really necessary, and more importantly it makes a movie that is already visually dark, much darker. Yates deliberately employs a monochromatic color scheme to help sell the bleak feel of the world, and the added darkness of 3D doesn’t mesh well with that. The film looks amazing at times, and in 3D you actually miss some of the impressive visuals.

Putting aside the 3D and the final battle (or lack thereof), the film nicely ties up several loose ends and brings the series to a mostly satisfying conclusion. The battle could have been more of a focus, but the emphasis is on Harry and his journey, and that is wrapped up nicely. It isn’t a perfect ending to the franchise, but it is a good one, and should is a decent goodbye to one of the most memorable and beloved franchises of all time.

Glass Onion review: a deviously intricate Knives Out sequel
The Lord of the Rings: The Rings of Power review: perfection, precious
The Invitation review: All bark, no bite
Inu-Oh review: A visually inventive anime rock opera
Portugal vs Uruguay live stream: watch the game for free today
Brazil vs Switzerland live stream: watch the game for free today
Where to watch the holiday classic A Christmas Story
5 movies to watch if you liked Devotion
The 10 most likable Futurama characters
Instafest app: How to make your own Spotify festival lineup
Billy Fox on editing Devotion’s action scenes and finding the heartbeat of a film
Irreverent cast and producers on their new fish out of water dramedy
Where to watch the Will Ferrell Christmas movie Elf