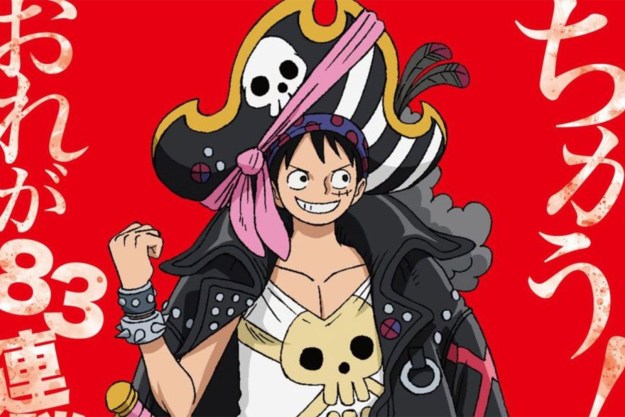 “Even if One Piece Film: Red's by-the-numbers anime movie formula doesn't quite make it stand out in a dense field, it's a visual show-stopper and loving expansion of Eiichiro Oda's rich world.”

Not many longtime genre fans could’ve accurately predicted how big of a global and mainstream juggernaut anime would become, and the impending success of director Gorō Taniguchi and Toei Company’s One Piece Film: Red is another colorful example of why that is. It’s one of the most highly anticipated remaining anime of 2022, and for the franchise creator and mangaka Eiichiro Oda, this is just one more notch in his and the expansive pirate-odyssey world of One Piece overall.

This is the 15th anime movie adaptation in the series, and while all of the entries prior to Red fall under the blanket term of non-canon, certain elements of this latest endeavors make continuity a little more of gray area and, in some places, allows its story to make some refreshing additions to the formula. Putting some focus on one fan-favorite character, Red-Haired Shanks, and the original Uta — along with the musical numbers she injects into the movie — are some instances of this. It does ultimately cater to an all-too-familiar “anime movie” formula in the end that won’t exactly grip initiated fans, but it’s a generally loving expansion of Oda’s pirate universe.

A vibrant feast for the eyes

Longtime anime and One Piece fans have been waiting for this film for several reasons, one of which — unsurprisingly — is what the animation studio at the helm would do in the movie’s visual department. And, expectedly, Toei Animation does not disappoint here.

While some of the high-octane action sequences can feel colorfully overwhelming, the film is an unfiltered and vibrant dose of eye candy that should appeal to longtime fans and newcomers alike. This shouldn’t come as a surprise for an IP as massive as One Piece, especially since the studios on the TV side of these properties often tend to take the reigns of the cinematic adaptations as well.

Other anime movies released this year, namely Dragon Ball Super: Super Hero and Jujutsu Kaisen 0, have upped their respective games in flexing the potential of animation as a medium, but One Piece Film: Red can comfortably and proudly stand alongside them with the studio’s achievements.

The whole of this franchise’s universe can be succinctly described as “colorful” and “vibrant,” but the expanded scope in Red certainly shows, including in the art direction and character designs. Elegia — the Island of Music where the story predominantly takes place — feels about as unique as any of the settings found within the manga source material or the TV anime adaptation, which is as high a compliment as any for a semi-out-of-continuity original story.

Oda was credited as being very closely involved in the production of the movie compared to past entries, and that certainly also shows in the character designs. This goes for the various flashy wardrobes the main and supporting cast sport throughout the movie but, more importantly, goes for the movie’s new star attraction in the form of Uta.

Nonetheless, nothing and no one goes unnoticed no matter how long (or briefly) they appear.

Eiichiro Oda has assured fans since One Piece‘s inception that the Straw Hat Pirates would be universally beloved, but the biggest selling points of Red are Red-Haired Shanks and the aforementioned Uta. The former has been generally elusive in the source material’s world, so his getting any kind of focused attention in a feature film was always going to be a plus.

Uta is mostly the star of the show in this movie, though, and the Grand Line’s resident J-Pop idol is as suitably larger-than-life as longtime fans would want to see in a fresh face within the One Piece world.

And, in a somewhat refreshing change of pace as far as the movies go, the story does a decent job of showcasing a plot that has a little more emotional resonance with the main cast than normal. That’s what partly paves the way for the movie’s most inventive aspect: the musical numbers.

It’s a fun way to work in an otherwise atypical subgenre for action-shounen anime, and Uta’s voice for the singing segments — Ado — does an excellent job performing the various upbeat songs in the movie.

Though, for some, this could give mixed results. As endlessly and wonderfully bizarre as this universe is, these musical numbers slightly hold back the pacing of the plot. It isn’t a dealbreaker, but as much as anime fans take to the music used in anime openings and endings, the frequency and length of the numbers give the story a stop-and-go pace in places.

Even with crowd-pleasers like Shanks and Uta, though, Red doesn’t exactly have too much that makes it stand out in an already packed crowd of big-budget anime movies.

The emotional investment between the main cast makes things a little more interesting than normal, but it still doesn’t escape the template of the almost nonsensically high-stakes climax that’s tough to get too invested in, knowing that the conflicts in these movies are almost always standalone. Similarly, the biggest spectacles in these kinds of movies always cram in more characters than the screen can handle just to sell everyone’s favorite side characters five seconds of fame.

Nonetheless, Red is an overall good and entertaining anime romp that’ll satisfy longtime fans even if it’s nothing groundbreaking and is also fairly safe for prospective fans curious to see what this sprawling pirate fantasy is all about.

Andor review: Rogue One prequel is slow-burn Star Wars
Confess, Fletch review: Jon Hamm charms in crime comedy reboot
Barbarian review: the less you know, the better
Cobra Kai season 5 review: Crowded, but compelling, karate
Portugal vs Uruguay live stream: watch the game for free today
Brazil vs Switzerland live stream: watch the game for free today
Where to watch the holiday classic A Christmas Story
5 movies to watch if you liked Devotion
The 10 most likable Futurama characters
Instafest app: How to make your own Spotify festival lineup
Billy Fox on editing Devotion’s action scenes and finding the heartbeat of a film
Irreverent cast and producers on their new fish out of water dramedy
Where to watch the Will Ferrell Christmas movie Elf