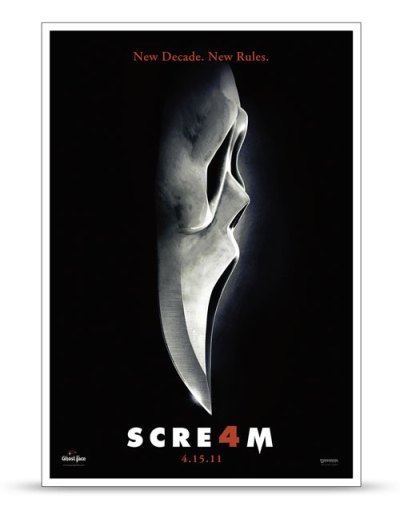 Let’s just get it out of the way right at the start: Scream 4 (stylized Scre4m) is director Wes Craven’s best work since the 1996 release of Scream. It isn’t the best in the series — that distinction still belongs to the genre-breaking original — but it’s a close second rather than a distant one, finding more in common with the first movie than the laughable two that followed it.

Scream 4 is also a difficult movie to review. So much of the joy of seeing it is wrapped up in the way the story unfolds, and to share too much of that would spoil the experience.

Let’s at least set the stage before we start speaking in abstracts. It’s been 15 years since Sidney Prescott (Neve Campbell) and her friends were terrorized by the ghost-faced killer in the sleepy little town of Woodsboro. Sid has gone on to great success, first for her story serving as the inspiration behind a popular series of horror films and later for writing a critically acclaimed self-help book, Out of the Darkness, based on her experiences.

Now she’s back in Woodsboro, the last stop on her book tour. Sid still has family in town, though she doesn’t know them that well. Her aunt (Mary McDonnell) lives there with her daughter/Sid’s niece Jill (Emma Roberts). Also still kicking around Woodsboro is Dewey Riley (David Arquette), now sheriff, and his wife Gale (Courteney Cox), the former reporter and now-struggling writer who wrote the books that served as the source material for the Stab movie series based on Sid’s experiences.

The story grows outward from that point, with the old gang getting back together and a new gang made up of Jill and her friends, a younger generation, being introduced. It isn’t long before our mask-wearing slasher returns and starts cutting a path of bloody murder across the town. As much a murder mystery as it is an anti-genre genre horror flick, Scream 4 constantly keeps the viewer guessing. “That’s the killer,” you think, “no question.” Then five minutes later, “No, that’s the killer! Got to be!” Then the poor soul dies. Or more evidence presents itself. Above everything else, Scream 4 is conscious of what it is and where it comes from. Craven and series scribe Kevin Williamson clearly revel in having the opportunity to play with that self-awareness, and they do a fine job of constantly keeping the viewer guessing.

When the truth is revealed — and don’t worry, the truth certainly is revealed — it feels earned. Whether or not you agree with the choice, it is impossible to argue that it comes out of the blue. The evidence is all there to be noted and dissected, and the actual solution may even be a theory you entertain in your head at some point while watching the story unfold. For all of the horror (and no small amount of comedy), Scream 4 also excels as a perfectly staged murder mystery.

Much more than gore

The expectation going in is that the movie is going to play with and subvert the conventions that have been established in the horror genre in the decade-plus since Scream was first released. It is very much there on the surface. The movie is rife with sly one-liners nodding to past examples, overt references and all manner of meta-commentary. The opening sequence alone, a riff on the original film’s surprise killing of Drew Barrymore that couldn’t possibly be repeated today in this Internet-fueled age, is roughly five minutes of knowing nods to the audience. “You think you’ve got this figured out?,” the movie seems to ask. “Try again.”

There is an additional layer of commentary going on as well, one that is there throughout the film even though it comes out most explicitly in narrative ramp-up through the second and third acts. The biggest enemy Craven, Williamson and the production team faced as this project came together was the Internet. They were miraculously able to keep just about all of the movie’s biggest secrets hidden — and sincere kudos to them all for that — but the constant vigilance they must have had to maintain is writ large across the text of the movie. While he was developing the script, Williamson was certainly aware of the challenges he would face as Scream 4 came together. That awareness very directly informs not just the subtextual elements of his writing, but the facts of the story as well.

To go into any more detail would risk spoiling the surprises that are in store, but there is a criticism to be leveled here which has little to do with specific plot points. The two layers of commentary aren’t necessarily at odds with one another — hell, they even tie together in some ways — but there is definitely an inequity. A significant amount of time is spent considering the present-day state of media consumption in our culture, and that sometimes comes at the expense of the genre play that has made the series so popular. This carries on right to the very end — no spoilers — with an extended climax that feels somewhat forced in its final minutes. It’s as if Williamson and Craven remembered at the last moment that they have to comment on the genre again to tie things together.

This occasional de-emphasizing of the genre play is intentional. As one unnamed character says at one unspecified part of the story (no spoilers!), “Don’t f–k with the original.” The expectation is that Scream 4 will follow in the footsteps of the original with a newly updated take on anti-genre genre horror. Instead, the bulk of the commentary that runs throughout the film is focused on self-analysis; Scream 4 looks back at Scream and acknowledges that there was a magic-of-the-moment to it that is simply impossible to re-create. In doing so it becomes a different animal entirely, a cultural commentator that carefully considers the success of the original by building a story around that very idea.

Turning Sid into a horror movie icon is a masterstroke, one that gives this movie its purpose. The A to B of the climax still feels forced and overly extended, but that could very well be the point. After all, with so many heavy ideas weighing on the plot, there’s a lot of baggage to be unpacked before the credits can roll.

Scream 4 isn’t an exceptional movie, but it is a very, very good one, and well worth whatever the going rate is for movie tickets where you live. Like the original, it is equal parts funny, frightening and suspenseful. If the genre play seems muted to you, remember it’s because there are larger issues being considered as well. It doesn’t matter if you’re seeing it to have a launching point for future discussions or simply to be entertained; either way, you won’t be disappointed.

Good Luck to You, Leo Grande review: A pleasant but lackluster two-hander