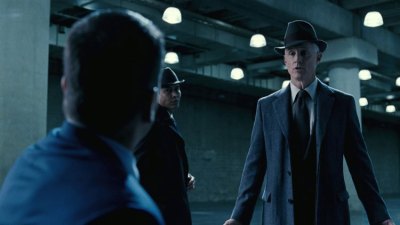 I really enjoyed The Adjustment Bureau, and thankfully I was fortunate enough to see it before the PR machine kicked into high gear and ads for the movie began to appear on every channel, all the time. The advertising won’t make the movie better or worse, but people might go in expecting one thing and leave after seeing something totally different.

The Adjustment Bureau is a love story with a supernatural twist. Despite the commercials using “that guy” for the voice overs on the commercials—you know the guy, the one the makes everything sound ominous and threatening like the world is about to explode or something equally dramatic—the movie is a sweet and engaging story about two people that were meant for each other, and they just happen to frame their love in a supernatural world they accidentally stumble into. It might not win over hard core sci-fi fans, but it should offer the vast majority of audiences a movie that will entertain. The Adjustment Bureau will fool a few people because of the advertising campaign that makes the film appear to be a thriller. It really isn’t, but it is still a fine movie with an original backdrop, and one worth seeing.

David Norris (Matt Damon) is going places. He is a politician with the rare gift of being able to connect with people while still being able to remain true to himself. Following a Congressional loss, Norris is doubting himself and wondering what he should do next, when a chance meeting with a girl named Elise (Emily Blunt) inspires him to give a concession speech that all but guarantees that he will have another shot at office. Then things get complicated.

Elise disappear, and David is left to wonder if he will ever see her again. He obviously wants to, but a mysterious group called the Adjustment Bureau is working to ensure that he doesn’t  in order to fulfill the mysterious “plan”. A mishap brings Norris and Elise together again, despite the best efforts of the supernatural Adjustment Bureau, and the pair’s mutual attraction puts everything at risk.

Norris stumbles upon the secret of the Adjustment Bureau, and he is given a choice. He can listen to the Bureau and go on to great things, or be with Elise and ruin both their futures.

To go into detail on what the Adjustment Bureau is would be to ruin the surprise, although to be fair, the mystery of it isn’t really a priority for the film. It is explained early on in order to raise the stakes. The Adjustment Bureau is a love story about a man and a woman who meet, and forces conspire to keep them apart. Everything else is details.

The love story is at the forefront of this film, and it works. The supernatural side simply makes the twists seem original, rather than turning the film into something that will be defined by the sci-fi aspect. That side is present, but it is the framework to the plot, not the Defining characteristic of it. The biggest misconception about this film from the trailers is that it is “dark”.  It isn’t, far from it.  If anything it is a film about hope and love. Just ignore the voice over guy trying to scare you.

The Adjustment Bureau is acted well enough that you almost take the skills of the cast for granted. Movies like these don’t usually win awards, but a bad cast would have turned the plot into a mess. The characters are written well enough that you will believe their circumstances (for the most part), and Damon and Blunt are especially good together as David and Elise. Go watch Ioan Gruffud’s Rzzie-worthy performance in Sanctum which almost single handedly turned an average movie into an awful one, and you will really be able to appreciate the cast of The Adjustment Bureau. Damon turns in another solid performance as a likable guy you want to root for, and Blunt matches him step for step. Together they make it look so easy that despite their fame, you will both buy into their respective roles, and what more can you ask of an actor and actress?

While Damon and Blunt carry the film’s love story, John Slattery (Mad Men, Iron Man 2) and Terrance Stamp (Valkyrie, The Limey) both breathe life into the mysterious Adjustment Bureau, giving personality to the antagonists without ever coming across as evil or heavy handed. They help propel the plot, and while you can’t root for them because of their actions, you understand them. But the real show stealer of the movie is Anthony Mackie (The Hurt Locker, Night Catches Us) as Harry Mitchell, a member of the Adjustment Bureau that sympathizes with David and Elise. Mackie continues to take on difficult roles that have garnered him critical acclaim, and he is just one performance away from A-list superstardom.

In his debut as a director, George Nolfi has equated himself well, and should earn a fair amount of respect and opportunity from Hollywood. It helps that his first feature film stars Matt Damon and Emily Blunt and not Lorenzo Lamas and Vanessa Williams, but Nolfi does a fine job with the well crafted (and expensive) tools at his disposal.

The biggest issue most will have with this movie is their own notions of what it is when they go in.  In technical terms, the movie is well handled, and for a first time director, Nolfi gets strong performances out of both Blunt and Damon. The pair ooze chemistry, and there are a few parts that may seem odd–especially the jumps in time that don’t seem to have any effect on the intensity of the relationship–but the fact that it works is credit to the chemistry of the cast.

The Adjustment Bureau will alienate some based on the advertising that makes it appear as if it is the second coming of The Matrix, where in truth it is closer to It’s a Wonderful Life. Going into too much detail about the mystery of what the Adjustment Bureau is would take away from part of the surprise of the movie. The supernatural aspect is more an original way to frame the love story than the focus of the film.

Damon and Blunt both turn in solid performances, which is vital in a love story that needs to compete against supernatural aspects. It would be easy to have made the love story the backdrop for the magical nature of The Adjustment Bureau, but that would have made for a slightly superficial film with a weak buildup and an unsatisfying climax. By the end you are left with just a cursory understanding of what the mysterious Adjustment Bureau is, but that doesn’t matter, as it turns out that it isn’t really the crux of the movie.

If you are looking for a romance with a twist, then look no further than The Adjustment Bureau. In terms of quality, this film is among the best of the year so far. That might not sound like a ringing endorsement since the year is still young, but The Adjustment Bureau offers a satisfying love story that is both charming and well executed, plus it has that rare cross appeal which will satisfy those looking for a date movie, as well as those looking for a movie will thriller aspects. Sci-fi purists might feel a bit underwhelmed at the lack of focus on the Bureau, but most audiences will leave the theater smiling at a well told and original love story.

The supernatural aspect is secondary to the love story, which will surprise some. The Adjustment Bureau itself isn’t explored as much as some might hope.

Clerks III review, or how Kevin Smith made me cry
See How They Run review: a charming but slight whodunit
Goodbye, Don Glees! review: A coming-of-age anime for all ages
The Fabelmans review: an origin story of Steven Spielberg
Special look at Andor teases the beginnings of a rebellion
Ana de Armas: from badass Bond girl to Blonde’s tragic Marilyn Monroe
What’s new on Netflix and what’s leaving in October 2022
Confess, Fletch director on Jon Hamm, Chevy Chase, and screwing with jerks
Andor review: Rogue One prequel is slow-burn Star Wars
Heardle today, September 22: Answer, hints and help for song of the day (Thursday)
Framed today, September 22: Answer and hints for the movie of the day (Thursday)
Everything we know about Ant-Man and the Wasp: Quantumania so far
Most powerful Star Wars villains ever, ranked