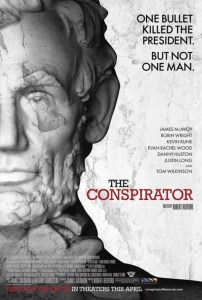 Hollywood has a tepid relationship with the truth. A lot of films “based on actual events” are released each year, but few of them deserve the title. Most of the time Hollywood is happy to capitalize on history, but it isn’t as keen on recreating it with any semblance of accuracy. We expect dialogue to be somewhat dramatized, but there’s little reason why Hollywood shouldn’t be obligated to account for most of its major plot points and characters. Yes, it’s more difficult to make a good movie if you can’t make everything up as you go, but if a true story is worth retelling, then it should be worth retelling honestly.

Unlike the creators of recent films like The Social Network and Unstoppable, with The Conspirator, Director Robert Redford proves that he can make a gripping film that holds tight to the truth. And without the added nonsense, what we end up with is a story that is both historically accurate and excessively relevant nearly 150 years later.

If you’ve taken history classes in an American elementary, middle, or high school, chances are that you’ve heard of Abraham Lincoln and the Civil War. It was kind of a big deal. You probably also know that five days after a major treaty was signed, he was shot by a guy named John Wilkes Booth. What you may not have heard about was that his assassination was a coordinated plot to kill the President, Vice President, and Secretary of State in one night. Of the three, only the Vice President survived. Seeking justice for the murder of Pres. Lincoln, Secretary of War Edwin Stanton (played here by Kevin Kline) decided to try the seven accused men and one woman in a military tribunal instead of in what the Constitution demanded: a civil court with a jury of their peers.

The Conspirator concentrates on just one of these trials: that of Mary Surratt, played by Robin Wright, who I haven’t seen in a role so reserved. Mary owned the boarding house where all of the conspirators met, and her son was involved in the whole mess. But did she participate or was she merely present? This we don’t know, and the War Department wasn’t willing to leave up to chance. They want this mess done with. Lucky for Mary, however, Senator Reverdy Johnson takes an interest in her case and assigns a young attorney fresh off serving for the Union, Frederick Aiken (James McAvoy), to defend her.

Aiken believes she’s guilty and Surratt does herself no favors. She withholds information, being far more concerned with the well-being of her son than her own fate, which she thinks is sealed. At times, her indifference is strangely cold. After all, a guilty verdict would mean her daughter would be all alone.

McAvoy is the star here though, putting on one of his best performances yet. He’s aided by the script, but shows his own character’s opinions with thoughtful precision. Seeing him stutter, lose his train of thought, and come up with a new idea on the spot brings much of the courtroom proceedings–which are fairly accurate, even in dialogue, from what I’ve researched–to life. Where Surratt is reserved and the jury is stone-faced, Aiken’s frustrations keep us engaged.

What doesn’t keep us engaged are the appearances of Justin Long, who just doesn’t belong in a period drama no matter how big a mustache he wears. While I like Long’s work, every time he appears with his big limp and fancy uniform, the film felt more like Tropic Thunder than a serious film. He looks like he’s been green-screened into every scene. Worse, once you see him, you began to notice the Hollywood color filtering in. In his absence, The Conspirator shines.

A lesser film would take a stand, but Redford and his writer James D. Solomon leave audiences to decide Mary Surratt’s guilt on their own. They are more concerned with the historic precedents that the trial may have set. Lincoln’s assassination was a terrible thing, but thanks to the actions that followed, we’re still dealing with unfair trials and abuses of power during times of war. It’s a shame that we seem unable to learn from our mistakes. However, we do still live in a country where films like The Conspirator be made and openly debated. For that, we can be grateful. The Conspirator brings to life a fascinating chapter of our nation’s past in an accurate and engaging way. For that, I highly recommend it.

With the Star Wars series Andor, Diego Luna finally steps into the spotlight
Halloween Ends final trailer teases showdown between Laurie and Michael
Evan Peters on having to go to dark places in Dahmer
Batman’s live-action future should be on HBO, not on the big screen
Father and daughter bond in the first trailer for Aftersun
The YouTube watching experience on TVs just got much better
The 10 most popular movies on Netflix right now
Hugh Jackman and Ryan Reynolds will reunite for Deadpool 3
Vernon Davis on post-NFL life and transition into entertainment
If you have a Netflix subscription, don’t sleep on the service’s games
Blonde review: a striking and tough Marilyn Monroe biopic
Rotten Tomatoes teams with Cryptozoic to launch card game
Bros and the modern LGBTQ+ rom-com