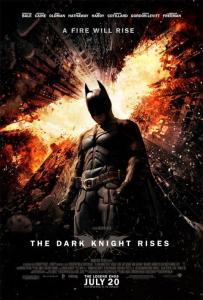 Ten or fifteen years ago I would not have believed that I would be able to review a film like The Dark Knight Rises. Who woulda thunk that superhero films would go from the bottom of Hollywood’s social structure to the top, with quality and record-breaking franchises that are shaping the industry. Not me, but as a lifelong comic book geek, I’m happy to see the trend of smartly made movies using the heroes of my youth. And out of the super hero resurgence, no series has had the high levels of quality that the current Batman films have shown. That doesn’t necessarily make them the best or most fun, but they are certainly well made.

Director Christopher Nolan’s take on Batman will likely be remembered for many, many years to come for what the films represent. Nolan didn’t pioneer the idea of making superhero films more mainstream by increasing their realism, but he arguably perfected the idea, taking a larger-than-life character and presenting him in a way that was given the same respect as any character in film. Batman Begins and The Dark Knight weren’t superhero films, they were films that just happened to be based on superhero characters, and that made a huge difference.

After Batman Begins grabbed the attention of both mainstream and dedicated comic fans, The Dark Knight was something of the perfect storm. The movie was well made to begin with, and it was raised to the level of legendary following the performance of Heath Ledger in an Oscar-winning turn that proved to be his last. With that build up, The Dark Knight Rises has the benefit of already being guaranteed at least a decent box office, but it also has the burden of trying to surpass the films that went before it. Not an easy task.

The Dark Knight Rises does not reach the levels that Dark Knight reached, but it is a fitting conclusion to what Nolan has formed as a trilogy. There are a few issues with the pacing at the beginning, but the movie ends on an extremely high note and concludes the trilogy fittingly.

Fear not, this review will be almost entirely spoiler free. The story of Rises takes place eight years after the events of The Dark Knight, but the affects of what occurred still hang over Bruce Wayne specifically (Christian Bale), and Gotham in general. The threat of Bane (Tom Hardy) changes all that, as the new masked villain has plans that will scar the city forever. And that’s all you’ll get from me on the plot.

When the story begins, Gotham is mostly peaceful, which makes sense to the plot of this film and the last, but it also means the movie starts off a bit slowly—despite an impressive opening action scene that introduces Bane in dramatic fashion.

The first third of the nearly three hour running time is spent explaining how things are in the world now, and setting up what is to come. When the action finally does begin, it is still just working toward something. Part of the reason for the sluggish start is the character of Bane, who takes some time to define.

Bane is in the film as much, maybe even more than Bruce Wayne/Batman, but it isn’t until about the half-way point that you see what makes Bane such a threat. His attitude is almost lackadaisical. That attitude serves him well later in the film, but the early moments don’t define him enough to really make his appearances memorable. This is something that will improve on subsequent viewings.

Oh, and just to clarify, the political back and forth over the plot and characters is ridiculous. You can make an argument that the movie favors both sides of the political spectrum, and you will be equally wrong. It is timely, not political, and it just comes down to your personal point of view.

Rises also has several moments taken from the comics, but only fleetingly. It is a great adaptation in the sense that Nolan honors what fans love about the comic without directly retelling it. Comic fans should enjoy some of the more subtle references.

Unlike Dark Knight, Rises is not a standalone film that builds off its predecessor. It is not really a complete film in many ways, and shouldn’t be judged as such. It is the final chapter in a book you may not have realized you were reading. The themes and underlying currents that were present, but not explored in the previous films, become the driving force of Rises.

If you watch it as the third part of a trilogy as opposed the third film in a series, it will provide a deeply satisfying and meaningful conclusion.

This film is Bale’s best turn as the caped crusader, primarily because he isn’t playing Batman—he is playing Bruce Wayne. The opposite was true in the other films, and that led to some of the lower points of the series, including the ultra-gruff voice, which makes a return, but only briefly. In the previous movies, the emotional impact of the actions were used as driving points for the plot — here they are the plot.

This is, by far, the most emotional Batman movie Bale has delved into. The journey of Bruce Wayne is at the heart of this film, more than the growth of his masked alter ego or the plight of Gotham.

Oddly though, both Batman and Bruce Wayne are absent for large portions of the film which leads to some slow down. There are suitable explanations for this, but the film relies heavily on the character arcs of John Blake and Selina Kyle. That means there are less action scenes than in the previous films, but the third act makes up for that.

The most surprising performance belongs to Anne Hathaway. Nolan has a knack for casting, and Hathaway gracefully pulls off the conniving, dangerous, and ultimately complex Selina Kyle. She has to share her time with the rest of the ridiculously talented cast so her appearances are limited, but she doesn’t waste a second of screen time.

Hardy has a tougher job, partly because his face is always obscured and his voice is added later—which is good, because the earlier concerns of his voice sounding like an early 90’s drive through speaker could have single-handedly ruined the movie. The way he speaks is a bit unusual though, and it will rub some people the wrong way. It is more nuanced than it first appears, and it is the type of performance that will improve with multiple viewings—especially after the history and true character of Bane is revealed.

Gordon-Levitt’s Blake is also a major part of Rises, and both he and Gordon are the conscious of the film. They are joined by a strong supporting cast, which is typical of Nolan. The cast’s skill is important too, because the early portion of the film, which is filled with exposition and set-up, seems to skip a bit of development in certain parts. With an already lengthy running time, Rises knows that it needs to get past the early portions as quickly as possible, so it skips over parts and lets the cast fill in the gaps.

When I think about the visual style of each of the previous films, I equate a specific color scheme to each. I imagine the first film to have an amber hue, while the second had a distinctive blue look. Obviously, these are my own personal interpretations, but they are ones that I can make strong arguments for. With that in mind, the third film’s dominant color is white.

There is a distinct lack of color throughout the movie. Wally Pfister’s cinematography is exceptional as always, and the way the movie is shot is impressive. Grays and whites dominate the color scheme, and the pallet is drab–at least compared to the other films. Part of that is because the majority of the film is shot in daytime. That is obviously not something that hurts most films, but it stands in contrast to the other Batman movies and what you may expect of the character.

Of the three, The Dark Knight Rises is the weakest film in the series overall, but it has the best climax. In the other movies, the focus was on the character of Batman and Bruce Wayne was the mask. The positions are flipped in Rises. This is Bruce Wayne’s story. It is about the man, and the toll his chosen life has taken on him. That cuts down on the action angle a bit, but it makes for a more emotional finale.

Rises is best seen as the cap to a trilogy rather than a film that stands on its own. It takes the themes in the first two films that were only lightly explored and focuses on them. Questions like the arrogance of Batman and the affect of lies on the public are given a chance to run free here, and there is a much deeper connection to the world and characters because of it.

If you did not enjoy the previous films, then this one will not win you over. The Dark Knight Rises has less action and more drama than the previous films in the series. Christopher Nolan and the cast were given a nearly impossible task: to conclude a trilogy that began with two of the most influential and highest grossing films all time. They don’t quite surpass them, but they do the series justice and tie the films together for a fulfilling and satisfying conclusion.

Topics
5 actors we hope will stay in James Gunn’s DC Universe
The Sandman and Peacemaker were 2022’s best comic book adaptations
5 things we want to see in James Gunn’s Superman movie
7 things we want James Gunn to do in the DC Extended Universe
The most likable characters on That ’90s Show, ranked
The 10 most popular TV shows on Netflix right now
Where to watch Jurassic World Dominion
The 10 most popular movies on Netflix right now
5 upcoming horror movies you have to see in 2023
The best MCU fights, ranked
2023 Oscars: where to watch all the Best Actor nominees
Where to watch Everything Everywhere All at Once
2023 Oscars: where to watch all the Best Actress nominees