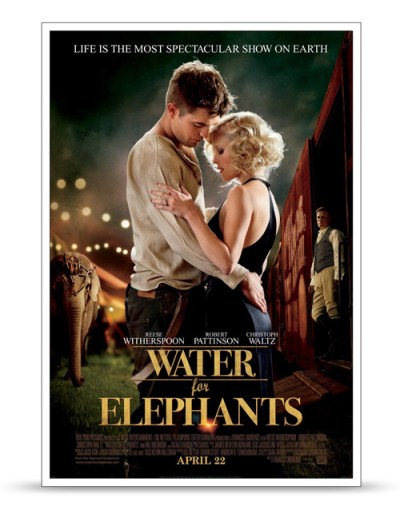 Who can resist a nice elderly gentleman reminiscing about the good old days? Some of the sappiest, most memorable films are kick started by an old person with a story. The Notebook, Titanic, Atonement, The Green Mile, The Shawshank Redemption… love them or hate them, there’s something fascinating about the good old days. In Water for Elephants, that old man is Jacob, played by the Hal Holbrook. We meet 90-year-old Jacob in the rain outside of a circus. He looks lost until he sees an old picture of a beautiful woman on an elephant. As tears begin to well up in his eyes, we know we’re in for a good story.

Jacob’s tale goes all the way back to the Great Depression. On the eve of his graduation from Cornell, tragedy strikes, causing him to leave town. Jacob’s young self is played by Twilight heartthrob Robert Pattinson, who tries his damnedest to smile a little and not look like a vampire. As luck may have it, he ends up hopping a train owned by the Benzini Brothers circus.  Back in the 1930s, we learn, circuses would travel all across the country. They’d set up in a field, try to attract a crowd, then move along, hopefully with enough cash to pay all of the animal trainers and bearded ladies they employ. When times got tough, larger circuses began absorbing the stray lions and clowns from the shows that didn’t make the cut and had to shut down.

August Rosenbluth (Christoph Waltz) runs the Benzini Brothers circus, and to him it is a moving sovereign nation of its own. On his train, he makes the rules and breaks the rules. He’s also married to that girl, Marlena, who we saw in the elephant picture. So, from the get go we have a good idea where the plot is heading: Jacob will fall in love with the girl and she’ll fall in love with him, but they’ll both have to deal with the crazy husband and circus owner. Broadly speaking, Water for Elephants fulfills this premise. However, it does so with more heart and character than you’d expect.

The goal for a movie like this is to make the love brewing between Jacob and Marlena seem legitimate and not forced. We need to feel their connection. Pattinson and Witherspoon have good enough chemistry, though we never quite get inside their heads. Still, their love is almost encouraged by August, who is more than a little self destructive. Why does August continually invite Jacob over to his train cart alone? He’s kind of a third wheel. Does August see the stolen glances between his wife and this new gentleman? At times we think he does, but there is always doubt. Like his character in Inglourious Basterds, it is very difficult to read the true intentions of Christoph Waltz. At times, his actions seem heartfelt, but he is also capable of immense cruelty. The pressure of running a circus is not good for August’s temper.

Water for Elephants has a  predictable plot, but Director Francis Lawrence refuses to paint the characters in two dimensions. August included, all three major characters do good things and bad things throughout the film. Jacob may be a good guy, but he also takes it upon himself to get involved in business (and a woman) that isn’t his. And while Jacob may not like it that animals are prodded, August is not the first circus owner to poke an animal to get it to behave. Get over it, buddy. Then there’s Marlena. What is her deal, anyway? Should she really be flirting with a young man 10 years her junior? She’s married, after all. Ah well…

Water for Elephants does not redefine cinema, but it does use its genre to good effect. All of the elements of a great film are here, and if you’ve never seen a romantic drama like this, you’re in for a treat. And thankfully, for the majority of us who have seen Titanic, and some of the thousands of other love dramas floating through the movie archives, Water for Elephants is filled with strong performances and moral depth that you don’t often see. It is a good genre film that prods a little deeper than it has to, given its audience. For that, it deserves some recognition. Oh, and don’t forget about the giant elephant, midgets, and generally funny looking folk. Even if you end up disliking the movie, it’s damn hard to hate the circus.