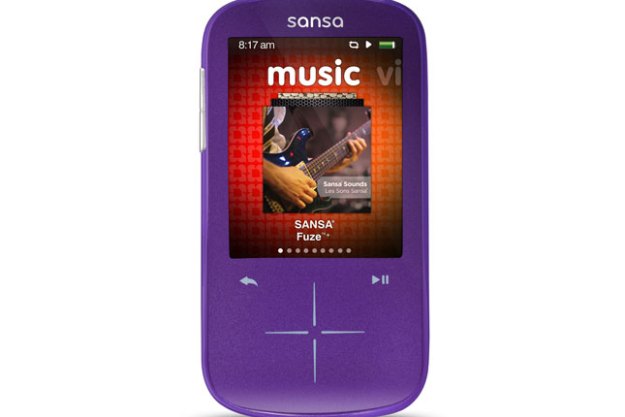 “Sansa’s Fuze+ introduces a large 2.4-inch screen, touch controls, and capacity up to 16GB, all while costing less than the iPod Nano.”

Smaller and cheaper than any smartphone, but still capable of playing pint-sized video, the Fuze+ media player competes for the same one-size-fits-all sweet spot held by the firmly entrenched iPod Nano. While it neglects Apple’s last-generation upgrade to touch and can’t compete with Cupertino on industrial design, its larger screen, video playback capability and significantly lower price will win it plenty of fans from those who can overlook the dodgy control scheme.

Take the Fuze, blow up the screen, freshen the graphical user interface, swap the scroll wheel for touch buttons, and you have the Fuze+. SanDisk hasn’t gone revolutionary with the latest iteration of its video-savvy media player, but it hasn’t sent prices skyward, either, so we’ll happily take whatever upgrades trickle down to this shockingly reasonable price point ($79.99 for the 4GB model) without complaint.

While SanDisk can’t challenge the build quality or stunning look of Apple’s anodized aluminum iPad Nano at this price, its industrial designers have managed to coax a little more character out of plastic this year. SanDisk seems to have taken inspiration from smartphones with a seamless edge-to-edge look on the front, touch controls rather than hard, clicky ones, and even a slightly ovoid shape and curved back that remind us of the “riverstone” design language on Palm’s Pre. On the bottom, the front hooks forward into a subtle chin, just like on the HTC MyTouch 3G.

Opting for dedicated controls rather than a touch screen does leave the Fuze+ with a bigger footprint than the new multi-touch iPod Nano at 2 inches wide and 3.75 tall (you could place two Nanos on top with room to spare), but the plastic case is comparably thin at about a third of an inch deep, and extremely light.

SanDisk bundles the Fuze+ with a pair of cheap headphones and a microUSB cable for charging and data transfer – and that’s all you’ll need. A wall charger would make a nice addition so you don’t have to rely on a laptop USB port when travelling, but we wouldn’t expect one at this price point.

The iPod Nano may outshrink the Fuze+ in its latest generation, but video playback becomes a casualty of that perpetual quest for smaller. The screen on the Fuze+ measures 2.4 inches, versus just 1.54 inches on Apple’s iPod Nano, and sports 320 x 240 resolution to Apple’s 240 x 240. It’s almost overkill for navigation, but works great for 4:3 TV content – provided you keep viewing sessions short. We found the screen tolerable for short clips and TV shows, but movies tended to wear at our patience with its small size, so-so brightness, and reflectivity. Dark scenes in particular can be difficult to see in situations where the screen competes with overhead lighting. While it will technically work for movies on a long flight, we see it getting more use watching half-hour TV shows on bus and subway rides, or breaking up long movies into smaller viewing periods.

SanDisk’s decision to go seamless with touch controls does leave the Fuze+ with a sleeker look – especially with the minimalist silver crosshair in place of a directional pad – but it’s a clear-cut case of trading practicality for style. Where once you could shoot through 10 songs in a list with 10 rapid-fire twitches of the thumb, the same action now requires either a full press and lift of the finger for every song, or sliding a finger vertically to coast imprecisely past a few at a time. It also rules out switching songs or hitting pause while the player is still in your pocket, since there’s nothing to feel for.

The no-nonsense interface from previous Fuze players gets a major facelift on the Fuze+, which now looks almost Zune-like, with colorful flourishes and intricate backgrounds under every menu. Some of them you can actually customize, and others adapt intelligently by, for instance, tiling all your album art. Fortunately, the tried-and-true mechanics of moving around remain similar, despite the dress-up game. Veterans and novices alike should have no trouble sifting through their music, videos and podcasts after adjusting for the aforementioned touch controls. The only glaring misstep: you have to scroll through eight pages options (music, video, settings, etc.) on the main page, but when you get to one end, you’re stuck – another flick doesn’t jump you to the other end as you would expect.

Like most modern MP3 players, sound output from the Fuze+ is clean enough to make it pretty much indistinguishable from competitors to the unschooled ear, and it has enough volume to render deafness in short time if you’re not careful.

Voice recording on the Fuze+ works great, especially considering you can barely even spot the microscopic mic it uses. It picked up people speaking at normal conversational volume 15 feet away, with enough quality to make what they were saying easily discernable , making it a fantastic tool for interview situations.

The SlotRadio card SanDisk shipped us with the unit didn’t work (“Unsupported file type”) but we’ll spare you the suspense: It’s a pretty lame concept. Check out our review of the Sansa SlotRadio for the fine print on SanDisk’s SlotRadio ecosystem, which we’re not too fond of. Fortunately, the same slot accepts regular microSD cards as well, so you can expand above and beyond the capacity you buy.

SanDisk has included an FM radio with its Sansa players for years before Apple got on board, and refined it more and more with every generation of its players. The Fuze+ scans the FM radio bands quickly, latches onto stations accurately with excellent quality and pulls RDS data (song titles and station names) in a snap.

The Fuze+ supports all the standard file formats you’ve come to expect include MP3, WMA, Ogg Vorbis, FLAC and AAC. It also supports video in MPEG-4, H.264 WMV and Flip Video formats – Windows will automatically ask you if you would like to convert video content to large for the player when you go to add it, but you can also download Sansa Media Converter for free, which offers more options for packing photos and videos into a player-friendly format.

SanDisk claims the Sansa Fuze+ delivers up to 24 hours of batter playback and five hours of video playback. In real-life use, it seemed to deliver on these impressive claims, whittling its battery bar down slowly enough to make charging something like a weekly affair for most users. As an almost negligible aside, though, it also seemed to take on charge at snail’s pace via the included USB cable – you’re probably better off leaving it connected all night than trying to top it off in a hurry before a trip.

You can’t out-Apple Apple, and SanDisk hasn’t tried to. The Sansa Fuze+ stands on its own with a much larger screen, support for video playback, and outstanding value (you’ll pay only $89.99 for the 8GB Fuze+, versus $149.99 for the 8GB Nano). Our biggest hesitation before buying one would come from the touch controls, which aren’t a game ender but irked us enough that we might consider buying an older model with the click wheel intact, if we could find one on sale.

This reliable leaker has some bad news about Apple’s M2 Pro chips
New VESA display standard makes it easier to pick a monitor
This half-sized micro-keyboard is a dream come true for PC gaming on the go
Apple finally allows you to repair your own MacBook
New AMD B650 Extreme motherboards are built for budget overclocking
This startup claims to have unlocked the secret to speedy CPUs
SpaceX Starlink internet heads to first cruise ships
We really didn’t expect these two new contraptions from LG
There’s a problem with those amazing Ryzen 7000 benchmarks
Halo Infinite Season 3 delayed until 2023, split-screen co-op canceled
Apple’s antivirus strategy for Mac has gone fully preemptive, but is that enough?
Intel admits to one key regret about its launch of Arc GPUs
Here’s why you need to update your Google Chrome right now