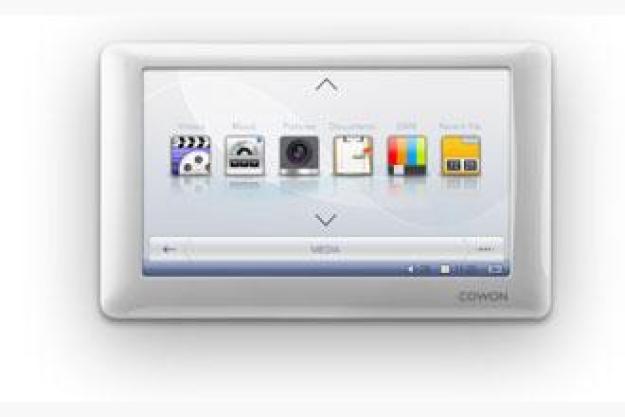 “Cowon's O2 is a strong digital media player with a couple of curious omissions.”

Cowon has a reputation for designing innovative, yet underrated digital media players, and the O2 is no exception. It’s not as sexy as Apple’s iPod Touch, and it doesn’t come with an all-you-can eat music plan like Microsoft’s Zune, but this device offers a host of features neither of its more well-known competitors can match.

Cowon tapped Texas Instruments’ DaVinci media-processor chipset for this device, pairing it with a 4.3-inch digital TFT touch-screen with a palette of 16.7-million colors, resolution of 480×272 pixels, and a 16:9 aspect ratio. There’s only 8MB of flash memory in the $219.99 base model we reviewed, but Cowon also offers a 16MB model ($249.99) and a 32MB model ($299.99). The presence of an SDHC card slot in all three provides an easy upgrade path, one that you’ll want to take use if you plan to watch a lot of movies on the O2.

Measuring 0.70 inches thick, the O2 is chunky for a flash player; in fact, it’s more than twice as thick as both the iPod Touch and the Zune. It’s also heavy, tipping the scales at 7.23 ounces (compared to 4.05 ounces for the Touch and the Zune’s 1.7 ounces). Much of the weight can be attributed to the large display (the Touch has a 3.5-inch screen, and the Zune’s is half that size), but the O2’s portly profile will keep the player out of most people’s pockets.

The touch-screen isn’t as flashy as the multi-touch display in Apple’s iPod Touch, but it proved to be bright and vibrant when displaying both videos and digital photos. The O2’s user interface, meanwhile, is very intuitive and easy to navigate, with basic menus labeled with both icons and text. Tapping the ever-present capital “M” immediately takes you to the root menu no matter how deeply you’ve drilled down into the nested menu structure. A multi-tasking feature allows you to operate two of the device’s functions at the same time. (You can read files using the document viewer while listening to music, for instance.) Icons for both applications appear at the bottom of the display; touching one of them calls up a mini menu with that lets you flip back and forth without stopping either.

Cowon offers an optional cable ($8.99) for connecting the O2 to a television display. The cable has a USB plug at one end and analog stereo and composite video RCA plugs at the other. The cable enables the O2 to play audio and display video at resolutions up to 720p; unfortunately, the feature works only when playing videos. You can use the headphone output to play music on your hi-fi or powered speakers, and you can display video on a big-screen TV, but we think it’s silly that you can’t do the same with digital photos.

The O2’s physical buttons are limited to power/hold and volume control; everything else can be accomplished using your fingers (provided they’re small and bony) or the included plastic stylus (which most people will prefer). The stylus can also serve as an ingenious stand when you unfold it, holding the player at your choice of two viewing angles; it even has a non-slip surface on its bottom and a lanyard so you can secure it to the player.

Cowon players typically support a rich assortment of audio, video, and image file formats, but the O2 is curiously missing support for a couple of common ones. It supports a wide array of video codecs—including DivX, H.264, MPEG-4, WMV, and Xvid—and it will play AVI and WMV files, but it can’t handle QuickTime or VOB files. Less surprisingly, it also won’t play encrypted videos, such as those you might download from Amazon Unbox or CinemaNow. Readers who rip DVDs and Blu-ray discs, on the other hand, will be happy to hear that the O2 can play Matroska files with resolutions as high as 1280×720.

Audio support is even stronger—unless you wish to play encrypted iTunes or WMA tracks. All the typical lossy audio codecs are supported, including MP3, M4A, and WMA; as are most lossless formats, including Apple Lossless, FLAC, Monkey’s Audio, and even WMA Lossless. And as is typical for Cowon players, the O2 features exceptionally good audio-enhancement and EQ settings. The included JetAudio software, meanwhile, comes with a complete toolbox for playing and editing songs and their ID3 tags.

The bundled earbuds, however, do little to reveal all the audio goodness that this player is capable of. If you buy one, do yourself a big favor and save some money for a good set of phones. We used Shure’s E4g earphones as well as TBI Audio System’s Millenia MG3 amplifier and Majestic Diamond speakers for our listening tests.

In addition to such common image formats as BMP, JPEG, GIF, PNG, and TIFF, the O2 can also display RAW images. The compact shared document viewer can display PDF, Word, PowerPoint, Excel, and other document types.

The O2 is a very good digital media player, but it won’t meet everyone’s needs. It delivers fantastic sound, but it’s totally inappropriate for someone with a Rhapsody or Napster “to go” plan, for instance. And while it has a fabulous display, this 8GB model might not have enough room for more than a couple of films (although that SDHC slot is a welcome feature). Lastly, the large screen and broad file-format support render the O2 an exceptional photo viewer, but we’re miffed that we can’t use its TV-out function to present our work on the big screen.