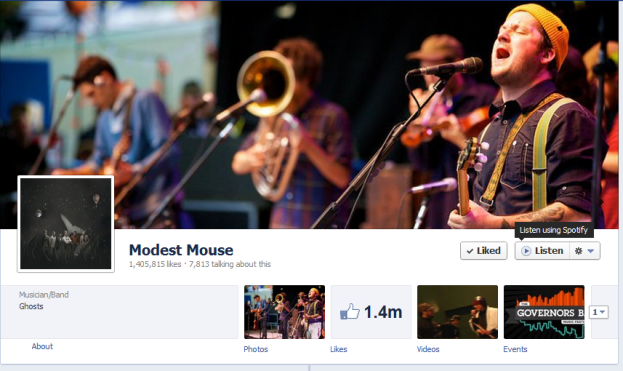 Back in September 2011, we were bracing ourselves for some big announcements from Facebook. The phrase “Read. Watch. Listen.” was supposed to embody what the social network had planned for us, and soon thereafter Open Graph was launched and the Timeline apps that more fully document and detail our digital lives were introduced.

Still, prior to the announcement there had been all sorts of talk about a digital media hub from Facebook, and while there are elements of this in Timeline apps and music integration has gone fairly well, there still isn’t as dedicated a space for music and video consumption. It’s something that Myspace actually did quite well: turn itself into a platform for music (and music video) discovery and viewing.

Now Facebook has launched a new Listen button that moves more in this direction. The feature will show up on musician pages so that you can immediately stream their songs. It integrates with Spotify, MOG, or any of the other popular and Open Graph approved apps. So before you hear anything you’ll be prompted to open or install one of those applications.

Unfortunately, the Listen button for band and artist pages isn’t available via smartphone or tablet. We assume it’s on the long list of mobile updates Facebook has on its plate.

Aside to cleaning up its mobile app, this could signal that Facebook will make a push into video soon. Music apps and features have undergone some upgrades, and video is sort of waiting in the wings. The moment legislation cleared Netflix to legally integrate with the site, it seemed as if the obstacles toward a Facebook video hub had been cleared. But that was way back in December, and Netflix still hasn’t been added to the Timeline apps. The streaming service recently upgraded its Xbox 360 app’s Facebook integration for international users, but US subscribers are still left in the social TV lurch. It’s possible Netflix is waiting until any remaining legal doubt is eliminated, but now seems like an idea time to flesh out the “Watch” part of its interactive agenda.