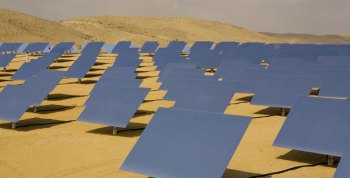 After buying and clearing 171 acres of land next to its gargantuan soon-to-begin-operations data center in Maiden, North Carolina, it looks as if Apple is about to build a solar farm on it.

The reason for Apple’s purchase of the extra land had been something of a mystery until the Charlotte Observer came across engineering plans entitled Project Dolphin Solar Farm A Expanded. The Observer points out that Project Dolphin was the code name used by the Cupertino company for the data center.

Confirmation about the construction of a solar farm is expected once the computer giant applies for a building permit. Permits recently issued by Catawba County show that Apple has been granted permission to reshape the slope of part of the vacant land beside the data center – thought to be in preparation for the construction of the solar farm.

A data center the size of Apple’s facility in Maiden – which covers around 180 acres – will no doubt need a fair bit of power to keep it ticking over. The Observer reports that using renewable energy would fit with Apple’s apparent interest in this kind of power, with plants in Austin, Texas, and Cork, Ireland, already powered entirely by renewable energy.

The new data center is thought to have cost somewhere in the region of $1 billion to build and should bring 300 new jobs to the area.

Apple hasn’t publicly stated what the data center will be used for, although its recent launch of cloud-based services doesn’t leave too much to the imagination.

How much of your data is Apple collecting? Not much, and here’s how to see it
Apple is removing apps that overshare your location data with third parties
Nvidia’s updates EULA to ban the use of gamer-oriented GPUs in data centers
Apple data center in Denmark gets a new neighbor in Google
AMD quietly slashes the prices of some of its best CPUs
A keyboard with its own CPU and GPU? Yes, it’s real — and it’s coming soon
The dream isn’t over — AMD’s RX 7900 XTX may still hit 3GHz
Great, now even the RTX 4090 power connectors are starting to melt
Best Samsung Galaxy Note 20 deals for November 2022
Nvidia’s RTX 4080 may be up to 45% slower than the RTX 4090, but it’s still pricey
We’re lovin’ this official McDonald’s gaming chair — the McCrispy Ultimate
Scientists find a surprising answer to the future of computers — paper
The Framework laptop is officially Thunderbolt 4 certified