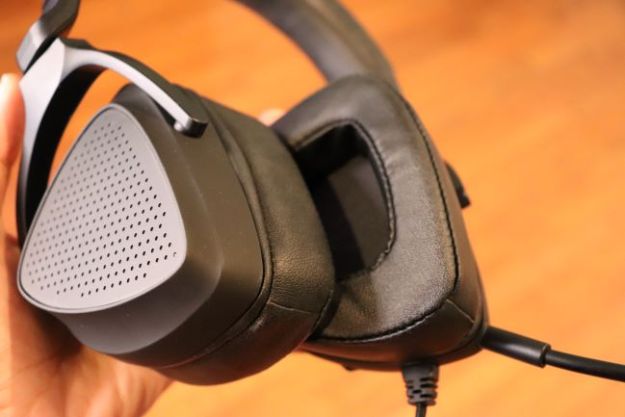 “The ROG Delta S Animate’s fun lights are its main draw, but you won’t see them while gaming.”

The Asus ROG Delta S Animate has a fairly unique design, at least as far as gaming headsets go.

It comes in a black color option with deep D-shaped earcups — but it’s the mini-LED AniMe Dot Matrix displays on the front that really stand out. It projects fun animation effects, just like the other Animate products in the line.

The headset is overall light and comfortable for long gaming sessions, but it unless you’re in love with the LED displays, the $250 price will be hard to swallow.

Weighing in at 310 grams, the ROG Delta S Animate is light and comfortable enough to get through several sessions of gameplay at upwards of 45 minutes. My very first impression of the headset was thinking that the D-shaped leather ear cups would cover the ears well and not pinch or squeeze the face, and they did not disappoint. The headset also comes with mesh fabric cup options with leather inner linings.

The band of the ROG Delta S Animate is also encased in light protein leather, while its extenders are made of metal and plastic. However, the outer earcups are made of plastic, which likely aids in its overall lightness. The matte texture lends to a minimalist look and flows well with the AniMe Matrix designs. With the AniMe Matrix turned off, a lot of the flair goes with it and I immediately begin to question the $250 price tag.

There’s a toggle-off key on the back of the left earcup. You can also toggle up for Soundwave mode, which aligns the mini-LED light movement with the sounds in the environment. The left cup also houses the volume wheel and the detachable microphone.

While the mini-LED AniMe Dot Matrix designs are fun, they are ultimately not visible during gameplay or while listening to audio. That’s a bummer. It takes away from the cool factor of this headset, unlike the corresponding ROG Strix Flare II Animate gaming keyboard, which keeps the unique lighting effects in view.

They are customizable, using the ROG Armoury Crate driver software, which you can download after purchase. There are several preset options, and you can design your own AniMe Matrix effects as well.

The attached USB-C cord made of rope-material on the ROG Delta S Animate is a bit on the shorter side at 1.5 meters. There is an additional 1m USB-A cable included with the headset that can be used for compatibility with consoles, such as the PlayStation 5. However, I’d say it might be a bit too short for comfortable gameplay for most setups. A PC setup is at least close enough for no real issues with extension.

I’ve mentioned the mini-LED AniMe Dot Matrix designs, but the ROG Armoury Crate driver software is where this feature truly comes to life.

Installing the compatible drivers gives users the ability to customize the design to their specifications, with effects including meteorite, ROG inspiration, Halloween, Space, and Cat. I tested the Space and Love effects, which transition automatically to the handset as soon as you click apply.

There are also additional downloadable effects including astrology-themed and New Years’ designs, among others. You can also upload your own designs into the content library, with the option of building their custom effect frame-by-frame within Armoury Crate.

You can also upload GIF files to test results. I tested the latter and got a semi-decent result from a firework GIF. The effect of course was not as detailed as the image itself, but I was able to see the stream and bursts of the firework.

There is also an option to turn off the AniMe Dot Matrix effects through  though the on-headset toggle is more convenient.

The ROG Delta S Animate rates well in the sound department thanks to its Hi-fi ESS 9281 Quad DAC and 50mm drivers. I had no issue setting my PC at level 50 volume for comfortable listening to all mediums, gaming, music, and film as the shape of the ear cups ensures none of the sounds gets lost.

This allowed me to capture many nuances while I played Destiny 2, from my character’s steps to enemies laughing when my character died, to the bustle and chatter of the marketplace. I listened to two songs on my wide varying taste spectrum, Robo Kitty by Excision & Downlink and Moondance by Van Morrison, and both selections held firm against the headset, with robust bass on the EDM beats and calming tunes and melodies on the jazz.

The standard setting for the ROG Delta S Animate should be satisfactory for most traditional listeners, however, Armoury Crate also includes an audio profile with a number of settings that can be adjusted for ideal sound. The options include sound optimization, virtual surround sound, reverb, equalizer, bass, boost, compressor, voice clarity, microphone, noise gate, perfect voice, and A.I. noise cancellation for phone calls.

The default sound optimization option is “communication,” which is what I did most of my tests under. The FPS option in sound optimization had to be my favorite and definitely was the loudest and fullest for all mediums. It brought forth the most sound detail.

I was watching an episode of Supernatural while testing the FPS option, and many aspects were especially heightened, from the Chevy Impala bumping over a wooden bridge to the bloody impaling of a ghoul with a knife to the hissing of a vampire in pain.

In comparison, I had to increase my volume to about level 75 on my smartphone, without the drivers to produce similar results of sound and details.

This headset has pretty much the same sound profile as its predecessor, the ROG Delta S. The headphones are nearly identical in terms of specifications, though the Delta S features a different design. They are also priced reasonably now at $195, especially when you consider that the Armoury Crate visual and audio customization software is also available for this headset.

The ROG Delta S Animate is a solid headset as far as sound is concerned. It will get users through games comfortably and with a sound that will please most listeners. While the audio works decently on its own, the software gives a boost that is especially complimentary. Keep in mind that the audio settings don’t translate to other devices like the visual settings without reinstalling the software.

The light and comfortable design of this headset is a definite plus. The AniMe Dot Matrix effects might be entertaining for a time, especially if you’re interested in creating your own custom designs. However, there is a good chance the novelty could wear off quickly, in particular for dedicated gamers.

The ROG Delta S would be the best alternative to this headset as it is simply a prior-generation model of the same gaming headset series, with both peripheries having similar audio and software specifications.

The SteelSeries Arctis 9 Wireless headset is another fantastic alternative that sells for $200 as a primarily wireless gaming headset. While it has no RGB or mini-LED effects, it does have a built-in microphone, and its connectivity allows for compatibility with PC and Mac, PlayStation, Mobile, Nintendo Switch, and VR.

Being a corded headset, there’s a good chance you can keep the ROG Delta S Animate working well for many years. While the headset is light, it does not feel flimsy or cheap. Still, I’d refrain from being rough-and- tumble with it, on the off chance something did happen to snap out of place. The headset does include a one-year warranty, but accidents are not included.

If you have $250 to splurge and are in love with the LEDs, you won’t be disappointed. For everyone else, there are better, more cost-effective choices out there — especially if you want to go wireless.

Topics
Alienware’s new gaming monitors come with a retractable headset stand
This throwback mini computer puts a Windows 11 PC in your pocket
Intel processors may get a lot more expensive, giving AMD an edge
AMD and Intel duke it out in the GPD Win Max 2, and there’s a clear winner
EVGA’s lost RTX 4090 prototype shows us what could have been
Microsoft’s DirectStorage can now boost your game loading times by 200%
Here’s how you could protect your RTX 4090 from melting
Someone built a PC in a microwave, because why not?
Update Windows now — Microsoft just fixed several dangerous exploits
Nvidia’s RTX 4080 12GB may soon return, but not how you think
This gadget could turn your M1 Mac into a productivity beast
Mayweather vs. Deji live stream: How to watch the fight
We may know the cause of the RTX 4090’s melting connectors