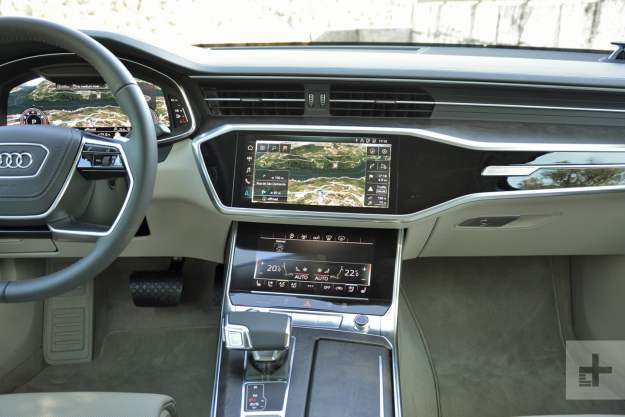 Stop us if you’ve heard this one before: Technology is the new yardstick in the luxury car segment.

It’s cliché, but it’s true. Horsepower alone isn’t enough to sell cars anymore; buyers want connectivity, too. Audi sensed the tide turning early on, and has regularly improved its MMI infotainment system in order to stay at or near the top of the pack. The newest version of Audi’s software, dubbed MMI Touch Response, made its debut in the fourth-generation A8 sedan introduced in the summer of 2017.

It has since spread to several other models, and we’ve tried it in nearly every one. Here’s what it’s like to live with, and how it stacks up to its luxury competitors.

Which cars have it?

MMI Touch Response comes standard on Audi’s A6, A7, A8, and Q8 models. The company’s other cars (including the A3, the A4, and the Q7) all use a slightly older system. MMI Touch Response is brand new, so it’s not too far-fetched to speculate that it will spread across the lineup in the coming years as Audi updates its current cars and launches new ones.

Cars equipped with MMI Touch Response are compatible with Android Auto and Apple CarPlay. Audi doesn’t have over-the-air updating yet, but Filip Brabec, the firm’s vice president of product planning, told Digital Trends the technology will make its debut in the coming months on the all-electric e-tron quattro SUV. He stressed it’s a feature we’ll likely see in other cars regardless of powertrain type.

Step inside an Audi model equipped with MMI Touch Response and you’ll immediately notice three screens. It’s a set-up that’s not as intimidating as it initially looks because it’s intuitive and, ultimately, everything is there for a reason. It also gives the cabin a clean, high-tech look.

We appreciate that Audi made MMI Touch Response smartphone-like to use.

The first screen you see is a 12.3-inch unit called Virtual Cockpit in Audi-speak, which replaces the analog instrument cluster. It’s directly in the driver’s line of sight. It shows a map, a speedometer, and a tachometer in its standard configuration. The scroll wheel located on the left side of the steering wheel zooms in and out of the map, a feature we appreciate while driving because it allows us to get clearer directions without moving a hand over to the dashboard.

Two additional buttons positioned above the scroll wheel let the driver configure the screen. You can make the map smaller and the gauges bigger, or get rid of the map altogether to display other menus like the media and phone settings, or information about the car and its surroundings.

Look right to find a 10.1-inch touch screen neatly integrated into the trim panel that stretches across the dashboard’s entire width. It’s gently curved and framed by a black bezel so it fades into the background when the car is off. High resolution means it looks sharp, and haptic feedback delivers a gentle buzz when you interact with buttons. It displays the basic functions you expect to find in an infotainment system like navigation (internet-connected, in this case), media options, and car settings, among others.

Audi mounted the third screen directly below the main infotainment display. It’s a smaller, 8.6-inch unit mainly used to set the climate control. It replaces the half-dozen sliders, dials, and buttons normally found on the center console in one fell swoop. Setting the A/C or the turning on the heated seats takes a few quick taps. And, with handwriting recognition technology, it’s also the screen the front passengers use to manually write an address into the navigation system.

Right-handed drivers can rest their wrist down on the gear selector and use their index to write. Lefties can either learn to be ambidextrous, or awkwardly reach over with their left hand. Alternatively, anyone can type in an address using the aforementioned touch screen. Voice commands work, too.

We appreciate that Audi made MMI Touch Response smartphone-like to use. The home menu consists of eight color-coded square tiles, an information bar at the top, and five icons arranged vertically to quickly access commonly-used functions like the navigation.

You can drag and drop icons after a long push to rearrange them. Clever haptic technology confirms you’ve pressed an icon with a short impulse, and the system also emits a discreet clicking sound. In our experience, the tactile and audible confirmations reduce driver distraction. Audi notes customers can turn both functions off. Most of the menus are shallow. For example, changing the driving mode with the touch screen takes three taps. One to enter the “car” menu, a second to access “Audi Drive Select,” and a third to select the desired driving mode.

The software normally responds to input immediately, though we noted a perceptible (but acceptable) amount of lag at start-up as it loads. It’s not as bad as some competitors, like Jaguar’s, which notably takes more time to load.

Cars equipped with MMI Touch Response aren’t entirely button-free. There are four below the second screen, including one that turns the engine on and off, and Audi wisely kept a volume knob.

MMI Touch Response is also smartphone-like in the sense that regularly using the system inevitably leaves an impressive collection of fingerprints on the screen. They’re easy to wipe off, but plan on carrying a microfiber cloth in your car if you want to keep the screen clean on a regular basis.

MMI Touch Response offers vibrant colors and an excellent resolution thanks in part to powerful graphics processors Audi sourced from partner Nvidia. Google Earth and Google Street View compatibility facilitates the task of finding a destination, especially in big cities. It’s easier to know which street you’re turning left on in half a mile if you see there’s a park or a Taco Bell on the corner of it.

The top-notch graphics also help while parking. Every car sold new in the United States comes with a rear-view camera; it’s the law. But Audi goes a step further by adding, sometimes at an extra cost, an armada of cameras whose footage gets stitched together to offer a bird-like top view and an interactive 360-degree view that spins around a 3D representation of the car. The driver can use swiping motions to change the camera angle in real-time.

Audi’s MMI Touch Response system is intuitive, user-friendly, and it boasts an excellent resolution. It’s also integrated in a neat, design-led way so passengers don’t feel like the car forces its tech on them. These attributes make it our favorite infotainment system on the market right now. It’s much easier to use than Mercedes-Benz’s current software, though that could change when the firm rolls out MBUX across its lineup later in 2018, and and we find the design more user-friendly than BMW’s system.

Topics
Old tech sounds preserved as part of huge audio project
This new AMD feature can boost your games with one click
The Framework laptop is officially Thunderbolt 4 certified
Logitech’s new webcams are an alternative to Apple Desk View
Upcoming RTX 4070 may not succeed unless Nvidia makes a key change
Returnal might be the first PC game to recommend this much RAM
Best Samsung Galaxy Note 20 deals for December 2022
Bad news: AMD may have launched RDNA 3 before it was quite ready
Microsoft Teams Premium uses AI to automatically recap your meetings
Intel’s upcoming laptop CPU may destroy even the best desktop chips
Boston Dynamics’ festive robot video has a surprise ending
Overclockers surpassed the elusive 9GHz clock speed. Here’s how they did it
Amazon starts drone delivery trials in California and Texas