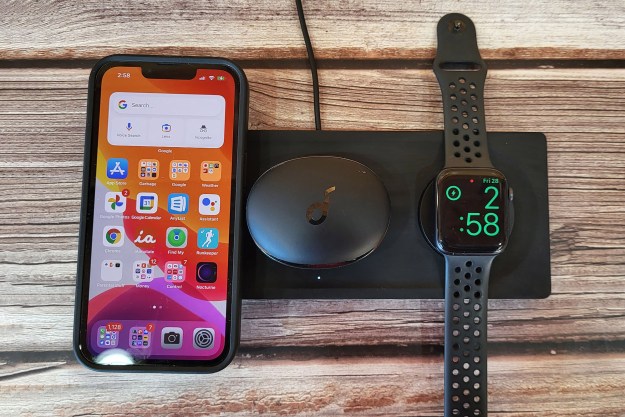 “The Belkin Boost Charge Pro 3-in-1 charger can charge all your devices at the same time, and it looks good doing it.”

I have spent the last four years searching for a great charger for my bedside. When Apple launched MagSafe on the iPhone 12, that search became a little more focused. When Mophie introduced its snap ring adapters that can basically make any Android phone MagSafe compatible, that search became laser-focused. Now, the search may be over: The Belkin Boost Charger Pro 3-in-1 wireless charging pad is about as close to perfect as I’ve gotten thus far.

This is a flat slab covered with a soft-touch silicone finish that is a little hard to keep clean. It measures 9 inches by 3 inches by 0.8 inches, so it’s fairly large. There are three charging areas: One MagSafe charger for your phone, one charger for your Apple Watch, and one designed for your AirPods that’s really just a Qi charger. I mostly used it to charge my Anker Soundcore Liberty Pro 3 earbuds but occasionally used it to charge a second phone. There is a single LED light that shows when your AirPods are charging, but there are no other LED light indicators since your phone and smartwatch presumably have their on-screen indicators.

The MagSafe charging plate for the iPhone is raised slightly, ensuring a good, solid connection. The Apple Watch stand flips up, so it can charge either vertically or horizontally, depending on your preference. The Apple Watch holder is also adjustable, depending on what size Apple Watch you have. It can rise up if needed to make room for the casing, which is an important design flourish. The magnets on both the MagSafe charging puck and the watch charger are very strong and won’t allow either device to slip.

That’s really all there is to it. The Belkin 3-in-1 Boost Charge Pro works well, the magnets are solid, and you can charge as much as you need to. I like this device (and MagSafe in general) because the magnets ensure my phone and watch stay connected even if I bump them at night. There are times that I would prefer more of a phone stand that holds my phone upright so I can read or check notifications, but on a bedside table, that’s an OK compromise. Once I set my phone down on the charger, I shouldn’t be looking at it anyway. The watch flips up, so I can use that as a small clock if I need, and that’s good enough.

The plug takes up three outlets in my power strip, which is not ideal.

The main benefit here is that the Belkin Boost Charge 3-in-1 charger is updated to support both Apple’s 15-watt wireless charging for iPhones and fast charge for the Apple Watch Series 7. Personally, I have an Apple Watch SE, so I can’t take advantage of that particular trait, but maybe you can.

How the charging pad gets its power is not ideal. The Belkin Boost Charge uses a barrel plug that rotates into the base to lock it in place. That’s fine, but I would always prefer a USB-C connector so it’s easier to travel with. The power adapter on the other end is huge as well. The plug takes up three outlets in my power strip, which is not ideal. I actually picked up some one-foot extension cords to mitigate that. It makes my power strip a bit messier, but at least I get my plugs back.

One other thing I would have liked to see on this charging stand is additional USB-A or USB-C plugs on the side. The base is thick enough to accommodate either type of port, and given how large the plug is, it would be nice to be able to plug in other accessories. You might be thinking: “This thing already charges your phone, watch, and earbuds, what else could you possibly want?” That is an entirely fair point, so it’s a forgivable oversight.

The Belkin 3-in-1 Boost Charge Pro charger works well, the magnets are solid, and you can charge as much as you need to.

All of this comes at a fairly hefty $150 price tag, which is on the high side, for sure. The addition of fast charging for the Apple Watch Series 7 is nice, and one could argue that with this charger, you don’t need the additional power brick you’d have to buy for your Apple Watch charger. Even so, it’s hard to justify the fairly high cost, especially given the preponderance of three-device chargers on Amazon. It’s a very clean and nice-looking charger, with some attractive add-ons, but whether it’s enough to justify that much money depends largely on your situation. If you have the desk space available, and the proper devices to take advantage of it, this could be a nice addition to your charging arsenal.

The Belkin Boost Charge Pro 3-in-1 charger is available from Belkin’s website for $150. Orders have already started shipping.

This is a very expensive charging accessory, all things considered. But it earns that price tag with the ability to charge three devices at once, and by supporting fast charging on the Series 7. There’s no shortage of three-device chargers available at a fraction of the price on other retailers, but the Belkin Boost Charge Pro 3-in-1 is solidly built, with strong magnets, and fast charging. The plug is a little bigger than I’d like to see, and I’d rather have a USB-C cable with a charging brick than a barrel charger and giant plug. But beyond that, this is a simple, understated design that looks good with just about anything in your home.

This combination of features is hard to find, especially since quick charging for the Apple Watch Series 7 is a new concept. So, while there is no shortage of great wireless chargers, many of them won’t be objectively better. Of note is the Ampere Unravel Wireless Charger, which also can charge three devices at the same time and fold into a compact cube. But it maxes out at 10 watts per charger. The Belkin Boost Charge Pro gives you a lot of power output.

How long with it last?

I have zero concerns about the durability of this device. There are some minimal moving parts, but otherwise, this thing is a solid brick. The proprietary barrel charger is concerning, though. It locks into place, which is nice, but its shape and the narrow confines where it resides means if it breaks, you’ll need to go to Belkin for a replacement. Belkin covers most of its devices with a two-year warranty, though, so that should be some comfort.

If you want a nice-looking, fast wireless charging trio of pads, then yes. This is not the cheapest option out there, but it guarantees your Apple devices will be up and running about as fast as possible. Of course, that’s only true if you need to charge three devices. The target customer has a MagSafe iPhone, AirPods, and Apple Watch. If you don’t have all three (or at least a set of earbuds that charges wirelessly), then this is probably too much charger for you.

Dell’s new XPS 13 2-in-1 rivals the Surface Pro, minus the headphone jack