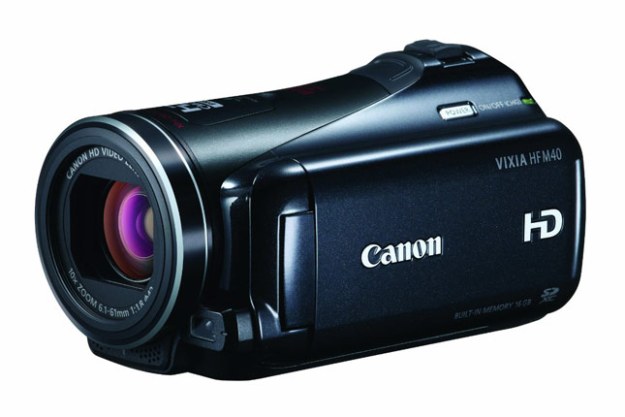 “If you’re looking for a camcorder that takes excellent videos, give Canon's Vixia HF M40 consideration, but look elsewhere if still photos are important.”

The first wave of 2011 camcorders has arrived and Canon took a page from its digicam playbook by *reducing* the megapixel count while ostensibly increasing quality. Yes, it’s counterintuitive to the perennial more-is-better theory but let’s see if it works for video as it did for stills.

Canon’s Vixia HF M40 is a decided improvement over last year’s blockier-styled models. While it has a similar horizontal shape, swooping lines and two types of black-toned finishes take it beyond the basics. And while the exterior improvements are a plus, the truly significant changes are inside regarding the imaging sensor and related technologies.

As DigitalTrends.com readers well know, camera manufacturers including Canon have taken a step back from the Megapixel Wars by introducing digicams with fewer but larger pixels such as favorites like the 10-megapixel PowerShot S95 and G12. Rather than cram as many pixels as possible on a small piece of silicon—which usually is a recipe for disaster and digital noise—less pixels is the new mantra for many models targeted to still enthusiasts—now it’s the camcorder buff’s turn. Where last year’s M series camcorders had ¼-inch 3.89-megapixel CMOS sensors, 2011 models have 1/3-inch 2.07MP HD CMOS Pro sensors. This chip is found in the three new M models and the top-of-the-line HF G10. At press events Canon stated the new imager has pixels 61% larger for improved color quality and better results in low light. As always we take these claims with a hefty grain of salt until we actually get one in our hands.

Beyond the CMOS sensor, the HF M40 has the features you’d expect in a $700 camcorder. Unlike the Flips of the world, it has a 10x optical zoom lens with a 35mm equivalent of 43.6-436mm, more than enough for typical use although we would prefer a wider angle of view like many new Sonys and Panasonics. Below the lens is a stereo mic as well as an Instant AF sensor. It measures 2.9 x 2.8 x 5.2 (WHD, in inches) and weighs 14.5 ounces with battery and card.

Fortunately the exterior isn’t marred with too many controls and buttons other than power and mode switches while on the top is a zoom toggle and the cover for the hot shoe. Surprisingly there isn’t a dedicated photo snapshot button here—you have to tap the LCD screen to grab a shot. It’s not a deal breaker but different. On the right side is the comfy adjustable strap, a mode switch (Auto, Manual, Cinema), speaker, optional mic input and a compartment for two SDXC card slots, a real plus compared to the competition.

Open the 3-inch widescreen LCD (rated a decent 230K pixels) you see the pluses of a touch panel as there are few hard controls. To the left of the screen is a button to adjust optical image stabilization and access white balance. On the body are four flat buttons to access Video Snap, Story Creator, Playback and Display/Battery Info. Video Snap and Story Creator are two options Canon gives shooters to enhance their videos. Video Snap records a series of short scenes while Story Creator give you hints as to what clips to take for a specific “story” such as Travel. We guess it’s helpful to some but hardly worth the effort. That’s it for the buttons though. USB, A/V, component and mini HDMI outputs are here as well. The rear has the record button, DC-in and battery slot. The supplied battery doesn’t fill the space so it looks a bit unfinished but you can always buy a bigger one to fill it in. The BP-808 battery that comes with the HM40 lasts for 75 minutes in typical start-stop use while the optional BP-819 is 150, making it a worthwhile investment if you pick up this camcorder.

Using the 16GB of onboard flash memory as well as a SanDisk Extreme Pro 16GB SDHC card, it was time to capture some HD video and stills.

The Vixia HF M40 features Canon’s new HD CMOS Pro sensor and we set it to maximum resolution/best compression (24 Mbps), starting off in Auto, then Manual and Cinema. With the last you can change the “feel” of the video so it has a more movie-like look, make it more vivid, add a sepia tone and so on (9 options available). Cinema is a good option but we tried vivid and weren’t too thrilled as scenes where much too orange.

Canon’s menu system is attractive, uncluttered and quite simple to use. Although you get a stylus pen, a touch of the fingertip worked just fine. The stylus can also be used to add graffiti to your scenes, one of the more ridiculous features found on a camcorder but not quite as bad as Casio’s Art Shot mode. We were much more concerned with the quality of the videos.

The first hint of spring in the Northeast arrived so we took the Vixia HF M40 to Coney Island in Brooklyn, a decidedly faded seaside attraction. We shot for several hours there as well as our usual indoor test subjects. When done material was reviewed on a 50-inch plasma via HDMI, computer monitor and prints made.

Before getting into the results, let’s state the M40 moves very quickly through the zoom range and snaps into focus with little “grabbing” something that separates any camcorder from most HD-shooting DSLRs. And let’s not forget sounds from the zoom mechanism are not picked up. Not to say built-in camcorder mics are God’s gift as many—including this one—make you sound like you’re in a wind tunnel if it’s breezy (and we were by the ocean).

Video quality was quite good with very accurate colors and a minimal of noise. We shot a bedraggled store front on the boardwalk with loads of streamers and flags flapping in the breeze—Bruce Springsteen was even playing on the loudspeakers. Results were excellent and the audio picked up nicely. Shots of the sun sparkling off the ocean and people walking on the sand were as good as you’d like. Detail was really good as well. We took close-ups of the red parachute jump and even at extreme telephoto, focusing was spot on—and fast. We were impressed with the results from this new sensor. When we captured video indoors results were also good. The HM40 handled uneven exposures well but the CMOS chip is no panacea—there was definitely noise in a dimly lit room. Going into Manual and adjusting white balance and exposure compensation will definitely help.

What needs the most help in this camcorder is the still mode. You can only grab 1920×1080 16:9 stills—that’s 2MP folks. Clearly Canon engineers concentrated on video quality, with photos an afterthought. Images were very noisy and making a print larger than 4×6 is a fool’s errand. At least Canon didn’t use interpolation to bump up the megapixel count like Panasonic and Sony. Still this is a real letdown from a company that prides itself in it photographic results.

If you’re looking for a camcorder that takes excellent videos, give the Vixia HF M40 consideration. If still photos are important, look elsewhere such as Canon’s new HF S30 with its 8.39MP sensor. It costs more at $1,099 but last year’s S20 with a similar sensor is $849 at legit online dealers. Again if videos are tasks one, two and three, you can save $50 for the new HF M400 with just dual SDXC slots, no onboard flash. Overall this camcorder is no home run and the fact it doesn’t record 1080/60p video like its 2011 competition is another negative. It’s a good try but it didn’t ring the arcade bell—even in Coney Island.

Topics
The Framework laptop is officially Thunderbolt 4 certified
Logitech’s new webcams are an alternative to Apple Desk View
How much storage do you need on your new iPhone 14? Here’s how to decide
2024 Chevrolet Equinox EV aims for affordability with $30,000 base price
Boston Dynamics’ festive robot video has a surprise ending
Overclockers surpassed the elusive 9GHz clock speed. Here’s how they did it
Amazon starts drone delivery trials in California and Texas
What to expect at CES 2023, from mondo TVs to EVs
12 high-profile tech opportunities for those job hunting
Make tech work for you: 10 side gigs to make extra money for the new year
CES 2023: Intel’s new 13th-gen CPUs are faster, cheaper, and more efficient
GeForce Now upgrades to RTX 4080 for 4K 240Hz cloud gaming
Nvidia brings the mighty RTX 4090 to laptops at CES 2023