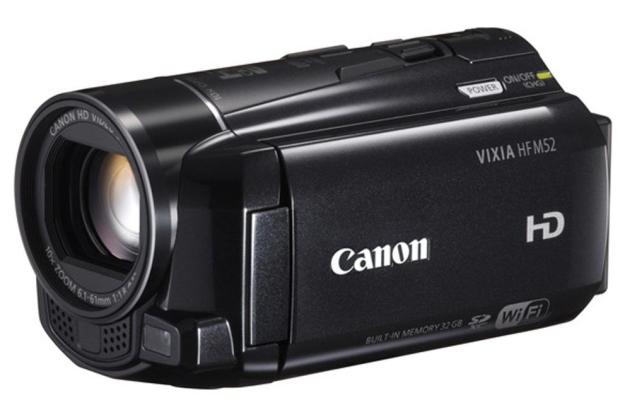 “The M52 offers a nice balance between enhanced features, quality, and affordability”

Canon has made great strides in building professional camcorders that push the envelope of digital video capture. Lucky for the consumer, some of those high-end features, like large sensors and manual audio recording, have recently migrated down to some of Canon’s more affordable Vixia camcorders. One such model is the Vixia HF M52, a camcorder that offers a nice balance of enhanced features, quality, and affordability.

At $700, you get a lot of features in the M52. It’s a powerful high-definition camcorder, capable of capturing 1080i video in the highest AVCHD quality, or 720p in MP4 (Internet) quality. You have a choice of three frame rates 60i, 30p, and 24p. A 10x optical zoom (6.1-61mm) offers a good zoom range, with 40x and 200x digital zoom expansions. A built-in 32GB flash memory or a removable 32GB SD/SDHC/SDXC memory card can record more than four hours of AVCHD video in FXP mode (the second-highest quality); longer record times are possible in lower resolution modes. The M52 also can shoot digital still images, but at a small 2MB JPEG resolution. An optical image stabilizer keeps subjects steady, and a touch-capable 3-inch LCD screen controls most of the camcorder’s functions. A built-in Wi-Fi mode supports wireless video/still image transfer to your computer’s Wi-Fi network, or to an iOS device.

The most significant design feature of the M52 is the Canon HD CMOS Pro sensor. Larger than the typical 1/4-inch sensor, this 1/3-inch sensor gives the M52 significant improvements in low-light sensitivity and in depth-of-field control – features highly sought after by advanced videographers. The low-light sensitivity improvement is due to the use of larger photo diodes that are more light-sensitive. The improved depth-of-field control comes from the use of a more “normal” zoom lens, one that is not so wide angle.

The Function LCD button opens up the main menu interface with a choice of many options, including Rec Programs. The Rec Programs menu sets up the main operating modes: Programmed AE, Shutter Priority (Tv), Aperture Priority (Av), and SCN (Scene Mode). Programmed AE is the default setting, letting the camcorder adjust all shutter speed and aperture settings. Aperture Priority is an aperture-selectable setting allowing one to achieve depth-of-field isolation – keeping the main subject in focus, while the background is blurred. Shutter Priority is the shutter-speed-based setting, allowing creative visual effects with time. Scene (SCN) mode offers a choice of 11 different shooting environments, such as Portrait, Sports, Night, Beach, Sunset, Low Light, Spotlight, and Fireworks, to name several; the shutter speed and aperture are pre-set for each selected environment.

Along with the camcorder, there are the following accessories: charger/adapter, battery pack, stylus, HDMI cable, USB cable, and two discs containing software.

The first test we performed is the quality of video capture and playback. We used the highest quality AVCHD mode (1080i/60i) and the FXP quality settings, a good tradeoff between image quality and recording time. We also shot at the 24p cinema mode. We played the video back from the M52 through the provided HDMI cable to our Sony HDTV. At 60i the results were outstanding, with an excellent dynamic range from blacks to whites, and very natural-looking colors as well. The sharpness and shadow detail were excellent – what we would expect from a top-quality HD camcorder. At 24p, there was the subtle image-blurring effect, which is characteristic of shooting at this cinema type slower frame rate.

The Canon Vixia HF M52 is one of the better consumer video camcorders you can buy without moving up to prosumer models.

We also checked out the performance of the 10x optical zoom for its speed consistency and ease-of-use. All consumer camcorder zoom lenses have a variable zoom lens, but they are often tricky to hold steady, resulting in jerky zooms. The M52 has three manual zoom speeds (slow, medium, and fast), as well as variable. Using any of the manual zoom speeds, the speed is constant and steady. In the variable mode, the zoom rocker switch is large enough that it can be held steady at any variable position.

We also compared how the audio quality differed in the Audio Scene modes. The STD (Standard) Audio Scene mode worked best overall, giving a good balance between highs and lows. However, when shooting outdoors in the wind, we activated the Noise Suppression feature. This reduced the wind noise significantly, but did not completely eliminate it.

We next tested the camcorder’s various shooting modes. In the Shutter Priority mode we shortened the shutter speed to a fast 1/1000th of a second, and increased it to as long as 1/8th of a second. The fast shutter speed has a stroboscopic effect, where each video frame is very sharp in appearance. This is great for capturing any fast moving subjects like sports or cars. The slower 1/8th-second shutter speed was great for creating dreamlike effects – especially evocative while zooming. In Aperture Priority mode, we set the aperture to f/2.0 to easily isolate subjects from their cluttered background.

In Scene (SCN) mode, the Low Light setting was the most frequently used because it helped us capture useable scenes, which would normally be too dark under the Programmed AE default setting. But be aware that Low Light mode uses a slower shutter time, which will cause blurry motion of moving subjects.

The biggest disappointment in using the M52 was its lackluster digital still-capture performance. JPEG resolution is only 2MB, which is low by today’s higher 8MB and 10MB resolution camcorders. Also, still capture is performed by pressing the Photo button on the LCD screen, which can cause image blurring if you’re not steady-handed. But the biggest “gotcha” of all is you can’t take a still image if the camcorder is in any type of Digital Zoom mode. This is just too restrictive. Most other camcorders allow still capture, independent of the digital zoom mode.

Another big annoyance was the Standby mode. When the M52’s LCD screen is closed, the camcorder goes into Standby mode, but not completely shutting down, unlike most other consumer camcorders. We found that if we didn’t remember to shut the camcorder down manually, this drained the battery almost all the time. And since the battery takes several hours to recharge, a second backup battery is almost mandatory.

The Canon Vixia HF M52 is a high-quality HD video camcorder first, but its digital still quality is a meager 2MB. The HD video quality when played back on our 52-inch HDTV was superb. The colors were spot on, as was the sharpness and detail. The audio quality was excellent as well. There were noticeable differences in audio when using the Audio Scene feature to select between different shooting conditions. Standard mode seemed to give the best overall setting. Manual audio recording was possible, but very tricky to set up through the nested menus. The larger 1/3-inch HD CMOS Pro sensor provides added benefit to low light performance as well as professional-like depth-of-field control. The zoom control was the best we have seen in a consumer camcorder. What this all boils down to is that it’s one of the better consumer video camcorders you can buy without moving up to prosumer models.

Topics
Chromebooks might get another great feature from Windows laptops
MacOS Ventura is official, with more ways to be productive
All the new Chromebook features quietly announced at Google I/O
Video-editing app LumaFusion to get a Galaxy Tab S8 launch
The dream isn’t over — AMD’s RX 7900 XTX may still hit 3GHz
Great, now even the RTX 4090 power connectors are starting to melt
Best Samsung Galaxy Note 20 deals for November 2022
Nvidia’s RTX 4080 may be up to 45% slower than the RTX 4090, but it’s still pricey
We’re lovin’ this official McDonald’s gaming chair — the McCrispy Ultimate
Scientists find a surprising answer to the future of computers — paper
The Framework laptop is officially Thunderbolt 4 certified
EVGA’s lost RTX 4090 prototype shows us what could have been
Microsoft’s DirectStorage can now boost your game loading times by 200%