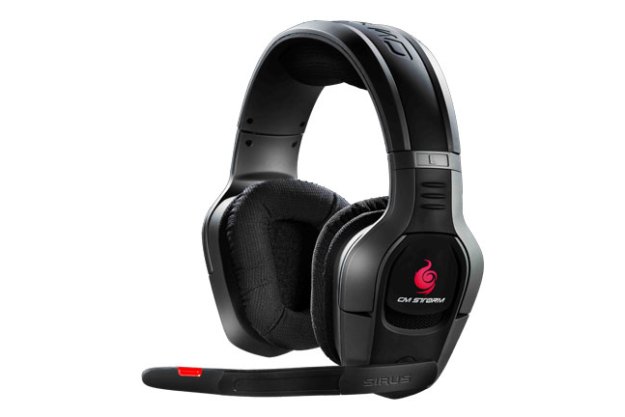 “The Cooler Master Storm Sirus gaming headset is a fantastic first time attempt for the company.”

Cooler Master, a company traditionally known for making computer cases and power supplies, has recently introduced a number of new PC peripherals to the market under the “Storm” product line including mice, laptop coolers and the Sirus Gaming Headset. There are a number of established gaming headset manufacturers out there including Triton, Creative, and Turtle Beach among others, but Cooler Master thinks it has what it takes to compete with the best. Priced at an MSRP of $129.99, Cooler Master is targeting the 5.1-surround Sirus gaming headset at both hardcore gamers and audiophiles. As you can probably imagine, Cooler Master has its work cut out for it to chase both of these user classes.

Arguably one of the better looking gaming headsets we have seen lately, the Sirus gaming headset looks like a piece of hardware you would find in a stealth fighter. It’s bathed in a flat matte grey and black rubber coating surrounding a thick and durable plastic shell. The hinges and joints on the headset lay flush when they are not being used, helping to create a very streamlined look.

An inline control unit sits on the desk and features buttons for controlling the sound channels and bass levels; a metallic jog dial in the middle is used for adjusting the volume level. Cooler Master has paid a lot of attention to the build quality of this product, going so far as to put a rubber bottom on the control unit to eliminate any scratches it might put on your desk, and even the thick cord used to connect the Sirus to your PC is covered in a nylon sheath which helps to eliminate tangles.

Cooler Master ships the Sirus gaming headset with two pairs of ear cup covers; one that features breathable microfiber over the cushion, and another wrapped in leatherette. Each ear cup affects the outside background noise differently simply because of the material. The leatherette ear cups block more outside noise, but in our tests ran hotter over the ears.

There are four drivers on each side of the headset. Three 30mm drivers power the center, front and rear channels respectfully, while a separate 40mm driver handles the low frequencies like a subwoofer would. The adjustable microphone is attached to the left ear piece and features a red LED indicator that glows when the mic is muted. Another cool feature is the red glowing flame on the outside of head ear cup; these glowing lights just help add to the overall polish of the Sirus headphones. Overall, the build quality of this headset is much, much better than what you would get from either Creative or Triton.

Cooler Master also includes a dongle to replace the USB connectors with analog connectors, in case you have an older computer, or simply ran out of USB connections.

We connected the Sirus headset to our Apple iMac desktop (running Windows 7) using both USB connectors. While the headphones will run off a single connection, the second connection helps power the built-in subwoofer and LED lights.

It’s worth noting that our review sample included a beta version of the software, so you can expect a final release when you buy these from your local retailer. The included software lets you customize and tweak the Sirus headphones a number of ways. The initial screen will let you choose your speaker configuration. Options include stereo, Quadrophonic and 5.1 surround. We chose 5.1 surround for our gaming tests and stereo for our music tests. Above the speaker selection are four headset “mode” presets which include a default setting, game mode, cinema mode and music mode. These presets will work fine for most people, but for those who like to tweak things, you can into more detailed settings by “right-clicking” the speaker icon on the left and then going into those deeper settings. These include equalizer, environmental effects, Flex Bass, sample rate settings and more.

For people not used to using headphones and headsets on a computer, keep in mind that switching between your PC speakers and your headphones takes a little bit of getting used to. You have to right click on your systems volume icon in the task tray, go to “Playback Devices” and then right-click on the correct icon for the Sirus and select “set as default device” to switch to them. Then switch back to your PC speakers when you are finished. Obviously using the analog inputs on the back of your system gets around this awkward configuration, but you will lack the full power of the headset. We have had to do this with every USB-based headset we have reviewed.

Moving on, we made sure to have 5.1-channel surround turned on with “Surround Max” enabled and 7.1 Virtual Speaker Shifter disabled, per Cooler Masters recommendations. Then we put on the Sirus and went to work.

We tested the Sirus headset with a couple games including Call of Duty 4 Modern Warfare, Call of Duty Black Ops and Dawn of War II. The first thing we noticed is that the bass is way too strong at the default setting. Regular gun shots drowned out the environment to the point where we could not hear people walking near us, or from what direction they were coming from. So we immediately went into the equalizer settings and the Flex Bass settings (we recommend turning down the frequency crossover to 80Hz or lower) to turn down the bass. Once that was done, the Sirus headset really started to shine. Surround sound worked as advertised and we had no problem telling the direction of incoming sounds. Players could hear us clearly with the microphone and there were no complaints on voice quality. The desktop volume controller works nice and feels high quality. We like that you can easily mute the microphone with it. The volume controls work in reverse, which we don’t like; turning the dial to the right lowers the volume rather than increasing it. And the toggle switch for different channels was confusing to new users too; Cooler Master needs to explain their use a little better.

As for general wear, the Sirus headset feels heavy at first, but the fit is great and we did not experience long-term fatigue with them. Overall, they are comfortable and feel very high quality.

For our music tests, we chose the “Classic” equalizer preset that Cooler Master’s team recommended, and started tweaking from there. For our tests, we used a 27-inch Apple iMac with the Sirus plugged into two USB ports. Our music selection consisted of Awolnation’s Megalithic Symphony (an alternative rock album), Beastie Boys Hot Sauce Committee Part Two, and the Black Eyed Peas The E.N.D. Cooler Master touts the Sirus headset as being audiophile quality, but the truth is that they are far from it. Bass is way too overwhelming and hollow booming, even when turned down and fine-tuned with the equalizer settings. Vocals are cold and slightly distant, and the overall soundstage is extremely narrow. Music fans are better off with a separate pair of headphones for listening to music.

The Cooler Master Sirus gaming headset is a fantastic first time attempt for the company. At an affordable $129, most hardcore gamers will find the Sirus work great, and thanks to their excellent build quality, are sure to last for quite some time. Cooler Master has some work to do when it comes to tweaking their software and default sound settings, but because our review unit came with beta software, we have no doubt that the final version will address the issues we ran into. Forget Creative, Cooler Master has them beat hands down with the Sirus – and they did it on their first try. Now that’s commitment to the gamer.