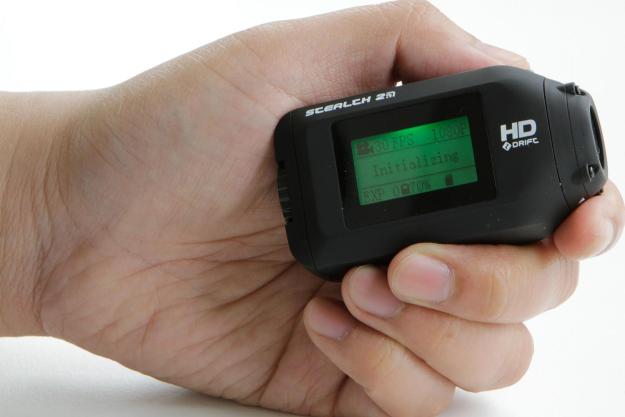 “The Stealth 2 is compact and loaded with features, but we wish the output were stronger.”

You know GoPro, and you know Sony, but what about Drift? The name may not be as familiar, but the U.K.-based company has been making action cams for some time, which are available online or at special camera stores.

The company’s latest camera, the Stealth 2, is its smallest and lightest yet. It shoots video at Full HD 1080, and captures photos up to 12 megapixels. But in a now highly competitive action cam market, is size and weight enough to make the Stealth 2 stand out?

The Stealth 2 has a signature design that Drift uses: a rectangular shape with curved edges, and a tapered end that leads to the 135-degree field-of-view lens. The camera has a rubberized texture and a sealed rear compartment that suggests some ruggedness. Indeed, it’s weather-resistant against rain, snow, dust, and mud, but it isn’t waterproof; you’ll need to purchase an optional underwater housing.

On the top are three buttons to change modes, cycle through menu options, and turn on and off power (long press) – a button that doubles as a shutter release (short press). There’s also a status LED that comes on when you’re recording, for example. Since the buttons are sealed, they required a hard press to activate. But, unlike small action cams like the Polaroid Cube, Sony Action Cam Mini, or the newly announced GoPro Hero4 Session, you can make settings changes in-camera, via the 1.3-inch LCD. You can’t review photos on it, but the monochrome display has different colored backlights to indicate what mode you’re in.

At the back is a hatch that you unscrew to unseal, revealing the MicroSD card slot (supports SDHC cards up to 32GB), Micro USB port, Micro HDMI port, and reset button. (Although the user manual says the Micro HDMI slot can send a live feed to a TV, we couldn’t get this function to work.) The battery is not removable, and is charged via USB, which means that once the battery is drained, you can’t easily swap in a fresh one; Drift rates the 1,500-mAh lithium-ion battery at 3 hours. The hatch door offers the comfort of a tight seal, but it can be difficult to open and close. Sony’s Action Cam Mini has a back cover that’s easier to open, but the Stealth 2 has a more robust construction – at least that’s what we’ve felt and observed.

One clever feature is that the lens can rotate 300 degrees, so you can orient the camera in whichever way.

The 135-degree field-of-view is narrow. Videos look more conventional, and you don’t get that wide, distorted shot you see from other cameras, like the Sony Action Cam Mini or even Drift’s larger Ghost-S. But it also means you can’t get more of the background into your shots. But one clever feature is that the lens can rotate 300 degrees, which allows you to mount the camera however you want and still keep your shots upright (a little arrow indicates where the lens is angled).

Besides the standard video and photo, the Stealth 2 can shoot photos in bursts and time-lapses, but functionality is limited: bursts are only three photos per second, and both burst and time-lapse photos are taken at 3 megapixels. You can take photos while recording video, but at only 2 megapixels. These options are nice to have, but the limitations make them less useful.

A feature we haven’t seen in many action cams is a Car DVR Mode. Essentially, it turns the Stealth 2 into a dash cam. It records footage in a continuous loop (1, 3, 5, 10, or 15-minute intervals) until the card is full.

The Stealth 2 has built-in Wi-Fi. When paired with the Drift Connect App (iOS and Android), you can see a live view image to frame your shots, start/stop video recording, activate a remote shutter, and change settings. You can also upload content to social media.

The camera comes with a “universal clip” that attaches to the mount kit (two included) and goggle mount. Also in the box is a Micro USB cable.

The Stealth 2 is small and lightweight; it feels bulky when placed in a pant pocket, but unobtrusive when you have it mounted to a helmet or your body. It’s sealed to protect against splashes of water or mud, but we would have liked to have an underwater housing included – like GoPro’s Hero or Sony’s Action Cam cameras – to not only make it extra rugged, but extend its capabilities. A camera that looks and feels like this demands to be put through the harshest activities.

Compared to the Sony Action Cam Mini, the Stealth 2 is actually bigger, but you get an LCD that lets you make changes on the fly. But as with all products with small displays, there are pros and cons. The benefit is that you don’t have to pair with a smartphone to make any settings changes; just navigate through the modes (video, photo, time-lapse, burst) and settings (exposure compensation, Wi-Fi on/off, white balance, date/time, etc.) by pressing the buttons on top. But the process not only takes time, it is initially confusing and always convoluted. Because navigation is only one way, you have to keep cycling through the menus until you get to what you need; miss it and you have to cycle through all over again. However, most users will stick to the default settings, and would probably stick to just video mode.

The Stealth 2 works with a companion app, called Drift Connect. Drift has two apps in the app stores, but the Stealth 2 works only with Connect. Like all camera apps, you get a live view image to frame your shot, and it lets you adjust the settings. But the Connect app falls short. When we first used the app, it was highly unstable, and we couldn’t get a live image to show up. Worst, it made a continuous high-pitched noise on our phone. The Stealth 2 needed a firmware update, we discovered, a simple process of downloading the file onto a Micro SD (with a computer) and rebooting the camera.

The firmware update resolved the issues, but we found others. While the live view lets you frame your shot, it disappears once you begin recording; after you stop recording, you have to hit the refresh button to bring back the live view (GoPro’s app does this as well when in certain resolutions, or with older phones – there’s no preview when you start recording). The connection is smooth and stable, but there is a response delay: Pan the camera right and the live view takes a second to catch up. You can’t choose time-lapse or burst modes from the app, and when you go into those mode by pressing the mode button on the camera itself, the app gets confused. Frustratingly, you can’t change the exposure compensation through the app. Collectively, these cons defeat the purpose of having an app (when you can’t easily get to the features, do the features really exist, we wonder?), but at least you can use it to review your content and share it to the Web. The Connect app just isn’t executed as well as other camera maker’s apps.

But if you stick to the basics, the Stealth 2 performs well. It starts up fairly quickly, and recording a video or taking a photo is a simple button press. We left the settings at maximum (Full HD 1080 at 30p, 16 megapixels), and while the Stealth 2 can shoot time-lapse photos (you’ll have to edit them into a video on your computer, using third-party software) and in bursts, the resulting images are only 3 megapixels.

Image quality is good but uneven. Generally, the camera captures images with accurate colors, but it also exhibited issues with color reproduction in some cases, and it can’t handle bright or low light well – either scenes get washed out or there’s noise. When we adjust the exposure value, we can control the brightness of the sky, for example, but details are lost in darker areas, so we left this setting at neutral; adjusting it can yield positive results, but without the ability to see what you’re shooting, it’s hard to tell.

In a now highly competitive action cam market, size and weight aren’t enough to make the Stealth 2 stand out.

Videos at 1080/30p are smooth (bit rate up to 20 Mbps) with no noticeable skipping, but they lack the vibrancy of a higher-resolution video; you have the option of lowering it 720/60p, however. There’s no image stabilization, so videos will be shaky if you’re doing a lot of bouncing around. Drift offers an optional stabilizer, but it’s pricey. The Stealth 2 uses a 1/3-inch sensor smaller than the ones in GoPro and Sony cameras, so it performed in-line with our expectations – which weren’t high.

The mic’s sensitivity can be adjusted, and it has built-in wind noise reduction. Set on high, the mic picks up audio loudly. But when set too low, it couldn’t pick up the sound from a few feet away, and it recorded a lot of noise that couldn’t pinpoint (there’s no mic jack). Definitely keep the sensitivity at high or medium, and avoid the low setting.

You’ll need a high-speed card to record video. This one comes with an adapter for easy transfers to your computer.

For bikers, use this mount to attach the Stealth 2 onto the handlebars.

Use this if you don’t want to apply the adhesive mounts. Ideal for dashboards when using the Car DVR function.

On the plus side, the Stealth 2 has good battery management. You can get up to three hours of continuous use – we estimate we achieved an average of a bit more than two hours, with Wi-Fi on and off. The camera has terrific standby time too: We left it on and didn’t notice much battery drain.

The Stealth 2 is a good action camera if we were still in early 2014, but many new cameras have since surpassed it in specs and image quality. It has plusses: the rotating lens, ease of use, battery life, LCD, mounting options, and weather-resistant body. Unfortunately, the unimpressive smartphone app, some uneven performance, and OK video quality made us wish for more.

But what the Stealth 2 has going for it is the price: it retails for $199, but you can get it as low as $130 on Amazon. It’s fine for youngsters, or if you aren’t so concerned about production value. Drift has its fans, and we like the larger Drift Ghost cameras, but it’s hard to recommend this smaller camera completely when you have stronger (albeit more expensive) options from other makers; ultimately, the price is what will draw users in. We do hope Drift will make a Stealth 3 with improved performance and specs, as that would pit it well against the competition.

Topics
Old tech sounds preserved as part of huge audio project
In just three years, 30% of PCs may be built on ARM architecture
This new AMD feature can boost your games with one click
The Framework laptop is officially Thunderbolt 4 certified
Overclockers surpassed the elusive 9GHz clock speed. Here’s how they did it
Amazon starts drone delivery trials in California and Texas
What to expect at CES 2023, from mondo TVs to EVs
12 high-profile tech opportunities for those job hunting
Make tech work for you: 10 side gigs to make extra money for the new year
CES 2023: Intel’s new 13th-gen CPUs are faster, cheaper, and more efficient
GeForce Now upgrades to RTX 4080 for 4K 240Hz cloud gaming
Nvidia brings the mighty RTX 4090 to laptops at CES 2023
Belkin just made a huge bet on sustainability at CES 2023