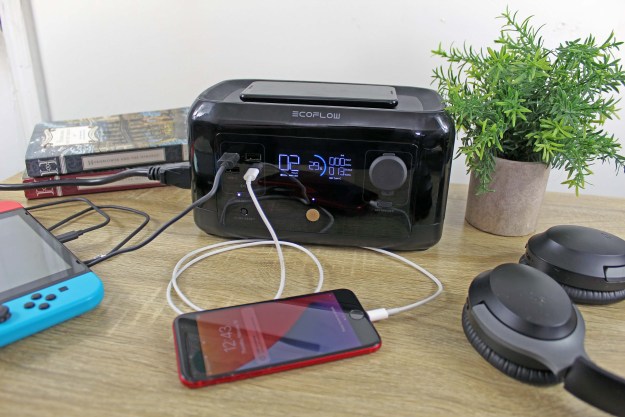 “The EcoFlow River Mini brings battery backup power to wherever you need it, with 210Wh of storage capacity, 300W of continuous output, a great selection of ports, and Qi wireless charging for your phone.”

EcoFlow’s River line of compact power stations has a design philosophy that focuses more on portability and features instead of the battery capacity or output. The River Mini is the most diminutive model in the series, and it packs some serious capabilities into a form factor that’s small enough to fit under the seat of your car, or maybe even in your glove box. It features a respectable 210-watt-hour battery, 300-watt continuous AC output from two outlets, three USB ports, and a 12-volt accessory socket. It’s available in both standard and wireless versions, with the wireless version including a built-in Qi wireless charging pad.

The EcoFlow River Mini is a slick little device, with a rounded rectangular shape and shiny black plastic finish that’s somewhat evocative of an old clock radio. The top of the device is cupped and flat, making it a good place to set your phone and other small items. If you opt for the wireless version, this platform doubles as a Qi wireless charger that’s capable of delivering up to 15W. In terms of performance, it’s right up there with the best wireless phone chargers.

The front of the River Mini features a large digital display, a power button, USB ports, and the 12-volt accessory socket. The AC outlets are located around one of the sides, along with a panel you can pop open to access the charging input sockets. The other side of the River Mini is void of features, as is the back. The back of the device does have a large cutout along the bottom that makes for an excellent grip. While this power station is small, it’s a bit big and heavy to palm football-style. The cutout goes a long way toward fixing that issue. It’s still a little awkward to carry around, but it’s very easy to pick up.

The shiny black plastic case looks great, but I found it to be an absolute fingerprint magnet. I’m not a big fan of shiny black plastic electronics for that very reason, but it does clean up nicely with a microfiber cloth. The soft rubber ring around the top of the device suffers from a similar issue, as it seems to pick up dust that settles into the rubber, which gives it a smudged look.

The River Mini comes ready to use, although you’ll likely have to charge it first. Mine showed up with about a 30% charge, and it was ready to go in about an hour. You can turn the unit on by pushing a button on the front, and then activate your desired output method by pushing a button located near the relevant ports. From there, all you have to do is plug in your devices.

EcoFlow has an optional companion app that works with all of its power stations, and I highly recommend taking the time to set it up alongside the River Mini. The River Mini even has a QR code sticker on the bottom. Scan the QR code, and it leads you directly to the app listing in the App Store or Google Play.

The EcoFlow companion app is pretty straightforward. The River Mini has a little button on the front marked IoT Reset, and pushing it causes the device to broadcast a Wi-Fi network. You can connect to that network with your phone, add the device in the EcoFlow app, and then connect the River Mini to your local Wi-Fi network. Once that process is over, you can monitor battery capacity and power usage through the app, check individual device connections, switch ports on and off, and even load up firmware updates.

The EcoFlow River Mini features two AC power outlets, three USB-A ports, one USB-C port, and a 12V accessory socket. It also features a Qi wireless charging pad on top that supports fast wireless charging. The ports all worked as advertised, and I was able to plug in a variety of devices for testing purposes. The only issue I ran into is that the two AC power outlets are a bit crowded, and there’s only enough space to connect one grounded AC plug at a time.

For charging inputs, the River Mini includes a connection for an AC power cable and another connection that can accept a 12V charger that you plug into your car’s cigarette lighter, accessory port, or a solar charger. It also includes all the cables you’ll need for each of those options, with an AC power cable, a 12V accessory cable, and a solar charger cable that’s designed to plug into standard solar panel barrel connectors. If your solar panel doesn’t use MC4 barrel connectors, you’ll need an adapter.

The River Mini contains a 210Wh lithium-ion battery that’s capable of delivering a 300W continuous with surges up to 600W. It features a pure sine wave inverter, which means that it’s suitable for running delicate electronics and medical devices. For example, someone with sleep apnea could use the River Mini to run your CPAP machine on a camping trip without worrying about damaging your equipment.

Each of the USB-A ports are rated to supply 5V at 2.4A, and the USB-C port can provide up to 100W. The wireless charger is capable of supplying up to 15W. The 12V accessory socket is rated at 12.6V and 10A, which is enough to power most of the same gadgets you’d normally plug into your car’s cigarette lighter socket. The USB-C port was capable of powering everything I threw at it, including a Nintendo Switch in dock mode and an M1 MacBook Air.

The USB-C port was capable of powering everything I threw at it, including a Nintendo Switch in dock mode and an M1 MacBook Air.

Since the battery in the River Mini is on the small side, I found it to charge really fast. It charged up in about 90 minutes when plugged into the wall, and it showed a charge time of about three-and-a-half hours when I plugged it into my truck. Just don’t leave it plugged into a vehicle without the engine running, as doing so may drain the vehicle’s battery to the point where the engine won’t start.

My River Mini review unit didn’t include a solar panel, but I was able to plug it into my Jackery SolarSaga 100 with the help of an adapter. The River Mini automatically detected the power input and switched to charging mode, and I was able to charge the battery, in full sun, in about three hours.

The EcoFlow River Mini attacks the portable battery market with gusto. Competitors in this price range are typically a bit more compact, but most of them also feature significantly weaker batteries, no AC power, or a single low-amperage AC output at the most. With two AC power sockets, four USB ports, a 12V accessory socket, and fast wireless charging to boot, the River Mini covers all the bases.

The killer feature is that the River Mini has all the same charging capabilities of the bigger EcoFlow units, which means you can plug it into a solar panel to keep the electricity flowing during a power outage or when you’re traveling off the grid. It doesn’t come with a solar panel, but it’s great to have the option of adding one if you decide that you need it.

The Anker 521 Portable Power Station is one option that covers most of the same bases as the River Mini. It has a similar battery capacity and the same number of AC outlets, but one less USB port. It also doesn’t have wireless charging for your phone, and it doesn’t come with any of the required cables for hooking up a solar panel. It does have a nice handle that makes it easy to carry though.

The River Mini doesn’t look or feel quite as robust as other EcoFlow products I’ve used. The shiny black case feels thinner and more likely to crack under pressure, which may be a factor if you’re planning on subjecting the unit to any kind of rough use on the road, whether that’s camping, tailgating, or something else. It is rated to go 500 cycles before the storage capacity drops to 80 percent, which means you could fully drain and charge it every single day for nearly two years and still retain 80 percent of the original capacity. It’s likely to last far beyond that with gradually diminishing capacity, but EcoFlow does cover it with a two-year warranty against defects.

Yes, you should consider buying the EcoFlow River Mini. This is one of the best portable power stations I’ve seen in this size, with features that beat most of the competition. The inclusion of a wireless charging platform more than makes up for the lack of a carrying handle, and I love that it has the same hookups for solar power as its bigger relatives. It’s also a great option if you’re looking for an entry-level device to keep on your desk to power your computer or network equipment, with the added bonus that you can power various USB devices and wirelessly charge your phone as well.

Topics
Video-editing app LumaFusion to get a Galaxy Tab S8 launch
HyperX’s latest wireless gaming headset has 300 hours of battery life
Alienware’s white wireless gaming peripherals look simple and ultra-clean
JBL shows off new true wireless earbuds and speakers at CES 2022
This portable display might be the touchscreen iMac substitute you’ve wanted
We’re lovin’ this official McDonald’s gaming chair — the McCrispy Ultimate
Scientists find a surprising answer to the future of computers — paper
The Framework laptop is officially Thunderbolt 4 certified
EVGA’s lost RTX 4090 prototype shows us what could have been
Microsoft’s DirectStorage can now boost your game loading times by 200%
Here’s how you could protect your RTX 4090 from melting
Someone built a PC in a microwave, because why not?
Update Windows now — Microsoft just fixed several dangerous exploits