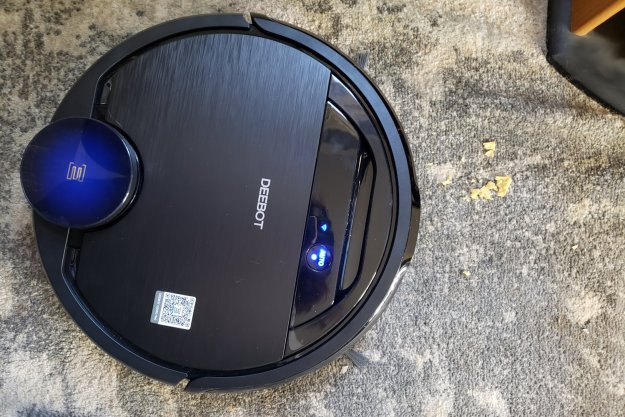 “While the Deebot 960 has impressive AI and a mop function, it doesn't live up to its potential.”

We love many of the other smart robot vacuums that Ecovacs has come out with. A couple have even made our best robot vacuum of the year list. So, I was pretty excited to try out the DeeBot 960. It comes with advanced AI and it even mops, so it sounded like a vacuum that may make our ‘best of’ list with the others. After trying it out, I was sorely disappointed.

Let’s talk about the app, first off. The Ecovacs Home app was the single most aggravating app I have ever dealt with. Like with most smart devices, you need to connect it with an app before you can use it with the app. Typically, this is a quick process that takes a few minutes at most. Not with the Ecovacs Home app, however.

It has the tendency to not find your Deebot, so then you must go through a series of troubleshooting steps to get it to work. Some of these steps include going to the WiFi settings in your phone and choosing the Deebot from the list.

If that doesn’t work, you’ll need to try turning off the data on your phone, stepping at least 5 feet away from your router (or closer, depending on the directions), taking the bot on and off its charging station, pressing various buttons on the Deebot, and so on.

At one point, after hours of trying the different troubleshooting tips the app and the support pages on the website offered, a customer service rep gave me an 11-step process to go through to try and get the app to work. Yeah, that didn’t work either.

The app has a tendency to stop working for no explicable reason.

If you do happen to get the bot to connect to the app, don’t get too excited. The app has a tendency to stop working for no explicable reason. Then, you have to delete the app from your phone and start over.

I thought maybe I just had a problematic Deebot, but one look at the app’s reviews on the Google Play Store tells you these problems are widespread. (I’ve reached out to Ecovac to see if maybe there is an update in the works to fix the problems with the app, but haven’t heard back as of this writing.)

This smart robot vacuum has a lot of great features. They just don’t seem to work very well. The major feature is the ability to map your entire home using AIVI technology. The problem with this it has to scan your whole house. There’s no option to make separate maps for each room.

If you decide to just make a map of your bedroom (like I did), the vacuum won’t clean any other room. Also, while it maps your house, you need to have plenty of light in each room, and you need to leave the house with all your pets, so the Deebot can make an accurate map. I just jumped on the bed and stayed there while it mapped, but most people don’t have that luxury.

It did avoid the sock I threw in front of it, though, so that’s something.

AIVI is supposed to scan the room so the Deebot can avoid objects that are too big to suck up, but the little bot didn’t seem to know it had this technology at times. It would ram itself into furniture legs with a force that set my teeth on edge. It got caught on cords and I had to constantly pull things from its grasp. Deebot even ran into its own charging station once. It did avoid the sock I threw in front of it, though, so that’s something. It also didn’t try to force itself underneath furniture where it would get stuck.

It has a feature where you can block off certain areas on its cleaning map, using the app, to tell the bot where not to clean. Unfortunately, that didn’t work all that well. Sure, the Deebot won’t go where you set up the no-clean area, but the app wouldn’t let me set up a no-clean area within 10 feet of the charging dock. We found that the Neato Botvac D6 preformed much better when it comes to no-go zones and avoiding obstacles.

You can also tell the Deebot to clean only certain areas for a good spot clean. Like the other features, this was frustrating, too. Often, I would tap on the screen to set up a spot cleaning area and nothing would happen. After a dozen taps on the screen or so, the square would finally pop up on the screen and I could adjust its size and location.

You can see the how the Deebot maps areas in the screenshots, below. The green box is a spot clean. The red boxes are no-clean areas. The lines are the paths the vacuum took to clean the room. As you can see, the bot can be erratic and even miss spots.

While Deebot does a great job on corners, backing up and re-vacuuming it several times to be sure the area is clean, it still seems dumb for a smart vac. The suction is great, though. It actually sucks enough to fluff the carpet fibers as it goes, giving the floor those satisfying vacuum lines like an upright. When it comes to noise, it is somewhat noisy on carpet. On hardwood and linoleum it’s quite distracting.

My biggest complaint about the vacuum’s functionality is that the bot won’t tell you when its dust bin is full. It just keeps on going throughout its cleaning cycle, fluffing lint around on the floor until it decides it’s done and returns to the charger.

Plus, the dust bin is tiny because it needs room for the mopping equipment, so you have to empty it multiple times during a cleaning cycle. That’s not very convenient. The Deebot really needs to be able to dump its own bin like the iRobot Roomba s9 Plus. The s9 Plus can empty its own bin up to 30 times into its own special waste receptacle without you needing to even touch anything.

One feature I really like is that it has a little tool by the dust bin that you can use to clean and detangle the roller. When you’re done, the tool snaps back into a little slot so it doesn’t get lost.

While mopping seems like an obvious and needed feature for a smart robot vacuum, I feel like it didn’t save me any time. Instead of filling up a bucket, I had to fill up the Deebot’s reservoir and attach its little mopping cloth.  It also took forever to do a job I would have done with a manual mop in under 5 minutes.

Then, I had to dump the dirty water from the bot and clean and dry the mop pad. My opinion is this feature isn’t useful on any robot vacuum unless it can clean itself, like the new Narwal T10 we saw at CES 2020.

The Ecovacs Deebot 960 seems like a great idea that just didn’t pan out. Though it sucks like a champ, its features have just too many problems to make it a good choice over so many other great smart robot vacuums on the market. While the mopping feature seems like a great addition, it really doesn’t save you any time at all. Overall, the Deebot 960 is a missed opportunity to be something really special.

While it has great suction, it fills up with debris quickly, and then doesn’t tell you it needs emptying. Just for this reason alone, I’d probably go with the Neato Botvac D6 or the iRobot Roomba s9 Plus. $1,150 is also way too steep for what the 960 has to offer.

Ecovac generally makes well-constructed robot vacs and the Deebot 960 isn’t an exception. It is made out of very thick plastic with a metal plate that spans the top of the unit. It seems like it would last for a very long time. It comes with a 1-year limited warranty.

While the Deevac 960 has a lot of potential, it just falls short in so many ways I wouldn’t recommend getting one. Even if you overlook the maddening problems with it connecting to the app, the features just don’t work as well as they should.

Topics
Dreame Technology is the next robot vacuum maker you should know about
The best new robot vacuums of CES 2021
The best robots at CES 2021
Eufy slips twin-turbine tech into its RoboVac L80 robot vacuum
Intel’s upcoming laptop CPU may destroy even the best desktop chips
Boston Dynamics’ festive robot video has a surprise ending
Overclockers surpassed the elusive 9GHz clock speed. Here’s how they did it
Amazon starts drone delivery trials in California and Texas
What to expect at CES 2023, from mondo TVs to EVs
12 high-profile tech opportunities for those job hunting
Make tech work for you: 10 side gigs to make extra money for the new year
CES 2023: Intel’s new 13th-gen CPUs are faster, cheaper, and more efficient
GeForce Now upgrades to RTX 4080 for 4K 240Hz cloud gaming