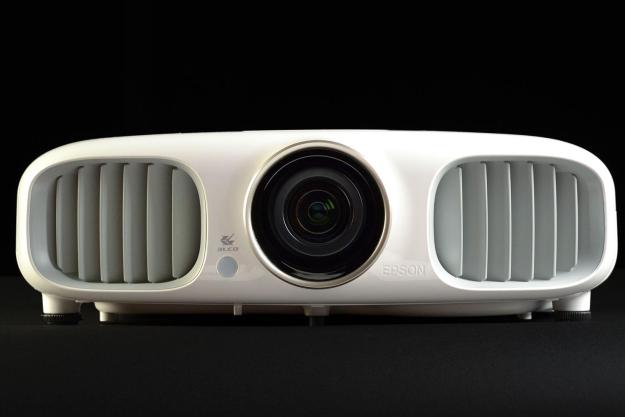 “The Epson 3020e was an absolute delight to watch.”

If you’re in the market for a home theater projector under $2,000 and the Epson PowerLite Home Cinema 3020e (3020e from now on) isn’t already on your short list, it should be. The successor to Epson’s popular 3010e projector, the 3020e packs in a bunch of new features – some more useful than others – practically defining the point of diminishing returns for its category. We spent several months with this projector in our home theater lab, which allowed us to familiarize ourselves with its features and performance on a more intimate level than we normally enjoy. Here’s what we found.

The Epson 3020e distinguished itself right out of the box because it came with far more accessories in tow than we’re used to seeing. In addition to two pair of RF 3D glasses, the 3020e comes bundled with a wireless HDMI transmitter, allowing cable-free connection of up to five high-definition sources such as Blu-ray players, game consoles and A/V receivers, with support up to HDMI 1.4. For those who won’t be going the wireless route, the 3020e also comes with a single HDMI cable and a pair of HDMI cable clamps. Other items in the box included a power cord, a full-size remote control with AA batteries, and a CD ROM users guide (also available online).

The projector itself is a little larger than it looks in pictures, though it isn’t nearly as massive as some high-end models. It’s designed so that it can be plopped on a table-top and used in any number of spontaneous scenarios – perhaps a backyard movie night or a big game night in the living room – and with 2300 Lumens of white brightness and color brightness at optimal projection distance (about 8 feet), it’s versatile enough, but at 13.3 pounds and 16.6 x 14.4 x 5.5 (W x D x H – in inches) it’s a little too big and heavy to just toss in a backpack. Of course, the projector can be mounted in a dedicated home theater spot as well, just make sure you choose a sturdy mount.

The 3020e is one of the few projectors in its price class to boast so many features. For a full list of specs you can visit Epson’s 3020e product page here. In this section, we’re going to stay focused on some of the projector’s more unique and user-facing features.

The “e” on the end of this projector’s model number indicates the inclusion of the aforementioned wireless transmitter. If you have no intention of going wireless in your installation, the Epson PowerLite Home Cinema 3020 is essentially the same projector, but without the wireless functionality.

The projector itself is a little larger than it looks in pictures, though it isn’t nearly as massive as some high-end models.

As mentioned earlier, the included wireless transmitter will accommodate up to 5 components, plus it offers the ability to project a split-screen image using two different sources. You could, for example, keep the football game going on one screen while playing a video game on the other. It’s also important to note that the wireless transmitter does offer an HDMI output and an optical output, so audio can be passed to an A/V receiver or preamp/processor. Epson claims a range of about 30 feet with the wireless transmitter, though we were able to push that to about 45 feet if we maintained line of sight. In our installation, we had the wireless transmitter placed in a separate room – about 25 feet away from the projector – and had no problems with connectivity. We did, however, notice that it seemed to take a rather long time to switch between sources – as many as 13 seconds in some cases.

As an LCD-based projector, the 3020e is immune to the “rainbow effect” that some complain about when viewing DLP-based projectors. The 3020e supports up to 1080p resolution and is 3D capable, though if more than two people want to watch in 3D, additional glasses will need to be purchased.

The 3020e doesn’t offer lens shift like more expensive projectors do, so users will want to install it on center with the screen and at the right height for the best possible picture. The 3020e does offer both horizontal and vertical keystone correction with +/- 30 degrees of correction , but we generally advise using it as a last resort since it can add artifacts to the picture. With a 1.6X zoom lens, the 3020e is otherwise flexible in terms of placement, and capable of up to a 300-inch diagonal image, though we would recommend something smaller for the best picture quality.

Another notable feature is the 3020e’s motorized iris. This allows the projector to offer better black levels and shadow detail, but it does introduce a little noise from time to time. With that said, we only heard it when our sound system was muted. In a home theater setting where a sound system is involved, the iris motor noise is a non-issue. If, however, you were to rely only on the projector’s built-in 10-watt speakers (which should also be used as a last resort) the noise might be a little distracting. As for fan noise, we’d rate the 3020e as low to moderate. It was only noticeable during quiet moments in music passages.

Finally, we liked the deep level of image adjustments available in the 3020e’s menu. The projector will offers five picture preset options, including Dynamic, Living room, Natural, Cinema, and Auto, but will allow custom settings for all of its individual inputs. We’ve provided our basic settings for our completely dark-room setup below.

… living with the 3020e was an absolute pleasure.

We should mention that we really appreciated Epson’s inclusion of a full-size, backlit remote control. It made the setup and adjustment process easy for us. However, once the projector was set up, we never touched it, save for powering the device on or off. We’d recommend a universal remote be programmed to handle these functions so the remote can be tucked away.

Our only pet peeve with the 3020e was its power-up time. It took 42 seconds from the time we pressed the power button to moment when a picture was displayed. For most, we don’t think this will be a huge concern. Just be aware that the 3020e doesn’t offer instant gratification.

Simply put: The Epson 3020e was an absolute delight to watch. Right out of the box and with no adjustments, we were impressed by the projectors contrast and color brightness. We witnessed some very strong shadow detail for such an inexpensive projector, and skin tones seemed especially natural. After some rudimentary adjustments, we were able to calm down what we felt were some oversaturated colors, particularly red, which seemed a little hot for our liking. We were also able to coax some good black levels from the 3020e, though if we had to point to a single weakness in picture quality, it would be the black levels. Even with an almost entirely black test pattern, with the iris nearly closed, blacks weren’t quite as deep as we would like. Still, the 3020e puts out an excellent picture.

Some of our favorite Pixar animated flicks looked spectacular on our 110-inch 16:9 Da-Lite projection screen. Colors blossomed, and motion was generally very smooth. Detail was also excellent. There were times when we could almost feel fabric textures, and could practically count individual hairs on various characters. Even DVD movies were so well-resolved that visitors were fooled into thinking they were watching a high-definition movie. When we switched the Blu-ray version, though, that’s when the big-time Oohs and Aahs came.

One particularly entertaining watch was Star Trek: Into Darkness, where the projectors ability to display 24p film content proved to be stellar. The film had a very natural look to it, even when the pace picked up and the camera got shaky. Contrast, once again, was the star of the show, with brightly rendered images cast against black backgrounds with such eye-popping energy, we had no problem forgiving the blacks from being less than totally inky.

Video games were also a big treat to play with the 3020e. Fast-paced first-person shooters get a lot of screen time in our home theater, and the action was always sharp and detailed enough to pick up on the bad guys, no matter where they hid. With some projectors, the pace of play can be almost dizzying, but with the 3020e, it was a non-issue.

Detailed analysis aside, living with the 3020e was an absolute pleasure. It’s exciting to know that this projector’s level of quality can be achieved for under $2,000. Add in all of its bells and whistles – especially the wireless signal transmission – and you’ve got a truly remarkable piece of equipment. Making the Epson PowerLite Home Cinema 3020e projector an Editor’s Choice was a no brainer. We highly recommend it.