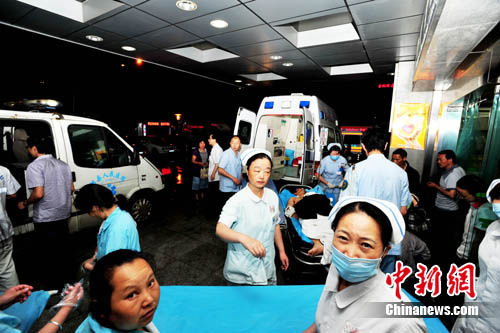 Multiple sources are reporting an explosion at Foxconn’s Chengdu manufacturing plant has left a handful of employees injured and two killed. Chinese publication MIC Gadget says that a blast at approximately 7 pm local time in the plant’s polishing workshop injured 16 workers. Three are listed as seriously injured, and two are reported dead. The area is being evacuated and there are warnings of toxic smoke. The cause has not been identified although “human factors” have been ruled out.

We can confirm that at approximately 7 pm on May 20, there was an explosion at our Chengdu campus. At this point, we can also confirm that there were two fatalities with injuries to 16 other employees. We are working with medical officials to provide treatment to the injured employees and we are working with government and law enforcement officials to contact the families of all employees affected by this tragedy.

The situation has been brought under control by the fire department and the cause of this explosion is being investigated by local police officials. Foxconn is cooperating fully with that investigation.

Production has been suspended at the site of the explosion until the completion of the investigation. The safety of our employees is our highest priority and we will do whatever is required to determine and address the cause of this tragic accident.

Foxconn is becoming increasingly synonymous with tragedy. The production facility, perhaps best known for its Apple production line, has been tied to a string of employee suicides as well as rampant reports of horrific working conditions. The building the explosion was in was reportedly responsible for iPad 2 production.

While the tragedy of the explosion will hopefully be measured in the toll of human life, it will also likely have the consequence of leading to a supply shortage for the tablet that is already experiencing escalating prices and growing demand in China.