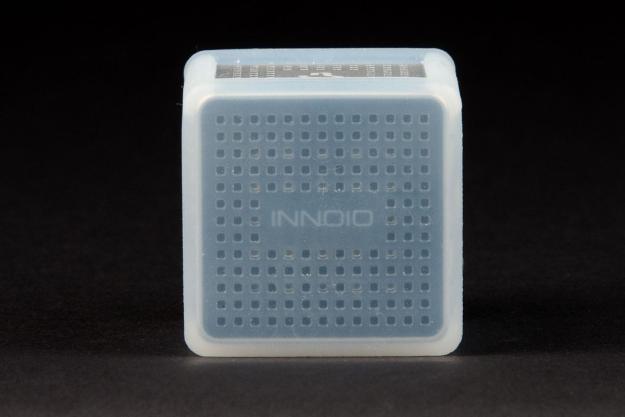 “…a sleek, rugged little block of modern engineering that lets you get your video fix almost anywhere.”

Remember those AT&T commercials featuring Tom Selleck prophesying about all of the astounding things to come? “Ever sent someone a fax from the beach? You will!” Since that prescient 30-second spot, there have been so many advances in technology it feels like we’ve all stumbled into a sci-fi movie – and we’re cool with that. Still, it’s not often these days that something comes along and gives us that shiny-new, futuristic feeling. But when we received the Innocube pico projector from Innoio, it all came rushing back to us.

As its minimalist design implies, the projector was extremely easy to use.

True, we’ve been less than impressed with portable projectors in the past. But our experience last year with the 3M streaming projector gave us hope that their time is nigh. Plus, with its cool metal frame, and tiny size, the Innocube just screams gadget-fun.

Currently available in South Korea and due to hit the US in the coming months, Innoio has marketed the Innocube as a rugged, kid-friendly device – and it would likely make any kid pretty stoked. But in order to find out how stoked, we recently took the Innocube’s show on the road with us. Here’s what we discovered.

Pulling off the lid of the rectangular box gave us our first glimpse of the miniature cube, its six faces gleaming with brushed aluminum and dark glass. A slim suit of rubberized armor covered the edges and back, leaving the sides open to breathe through a collection of tiny slotted holes. A small instruction manual in several languages sat next to the cube, and beneath the top layer was a collection of accessories including an Android connection cable, a 5 to 11-pin mini-USB converter, a charging cable, and an HDMI to mini USB cable.

At 1.77 inches per side, and a weight of 4.4 ounces, the little pewter block is small enough to impress, and heavy enough to feel substantial. Holding the Innocube, we were reminded of that scene in Prometheus in which Dr. Holloway delivers his hologram-laced keynote address to the recently awakened crew with nothing more than…well, a tiny metal cube. Unfortunately, technology isn’t quite there yet (though it’s a comforting thought if you’ve seen the film), and the Innocube does not project interactive holograms onto thin air.

What it does project is a flat pane of standard def real estate, with a max resolution of 650X480. The DLP Pico powered chip inside provides around 35 ANSI lumens to the lens, which means that to reveal any real detail, the Innocube must be used in dark or dimly lit areas. The included cables allow connection to any HDMI or MHL device, though unfortunately, there is no means to connect a Roku Streaming Stick as can be done with the 3M Streaming Projector. Battery life is estimated at about 120 minutes per charge – not as much as we’d hoped for, but more than enough time for a mini-marathon of Arrested Development, or a screening of Toy Story 3 for the kids.

The Innocube’s exterior panels are succinct, with only a few controls and inputs adorning the sides. Next to the power button on the left side is the small video input labeled “Beam.” A mini-USB charging input and a focus dial rest on the opposing face. Search though we might, however, we could not find an audio output, meaning our media experience would be limited to whatever minute speakers Innoio could squeeze inside the tiny frame.

We tested the Innocube by connecting it to our iPhone 5 with the included cable and an iOS Lightning adapter. As its minimalist design implies, the projector was extremely easy to use. Pressing the power bar on the side set the little gadget humming, as its oh-so-tiny fan spun from within. Immediately, an image flooded the wall, and we were able to focus it easily with a quick spin of the dial.

Viewing the projector in an average bedroom is fun and all, but we wanted to use it in the wild, so we brought the little cube on a camping trip. As is the case for most projectors, a white backdrop is necessary for accurate color. While we were able to watch content on the wall of our tent, we got much better results by hanging up a small white sheet. With our makeshift screen in place, our nylon domicile was transformed into a mini movie theater.

Though the Innocube’s standard def image won’t wow cinephiles, it looked pretty darn good on the wall, providing bright colors and a relatively sharp image. The coolest part for us was the fact that, as long as you’ve got the wall space, you can create a huge image by just sliding the little block backwards. In fact, our tent theater easily trumped our 40-inch TV at home, shooting a massive image against the wall of our four-person tent.

Keep in mind that little projectors like this don’t provide any sort of keystone adjustment, so keeping the image squared off will require placing the Innocube at the same height as the center of your screen. More likely is that you’ll have to put up with a slightly trapezoidal shape (it’s really not a big deal at this level of performance anyway).

As for the sound, it was predictably tinny and weak, without much to speak of below the 1KHz frequency line. To be fair, the tiny system provided all of the main sonic elements, and we were able to hear dialogue and the majority of sound effects from our test content. But any ambient noise threatens to drown it out. Not adding an audio output seems like an oddball oversight. A little Bluetooth speaker like the Braven BRV-1 would be the perfect companion to this projector for a little large-screen entertainment in the wild.

The Innocube is a sleek, rugged little block of modern engineering that lets you get your video fix almost anywhere. Though some may find the standard def image and weak sound a little out of step with the projector’s $300 suggested price tag, there are few gadgets that can deliver a big screen image from the palm of your hand. And for kids, it provides a lot of fun, as well as some oh-so-precious distraction time.

Before jumping in, we recommend checking out the aforementioned 3M Streaming Projector, which offers a better feature set and a brighter image as well. But for convenience, durability, and sheer futuristic allure, Innoio’s Innocube is hard to beat. Something tells us this could be a real hit this holiday season.