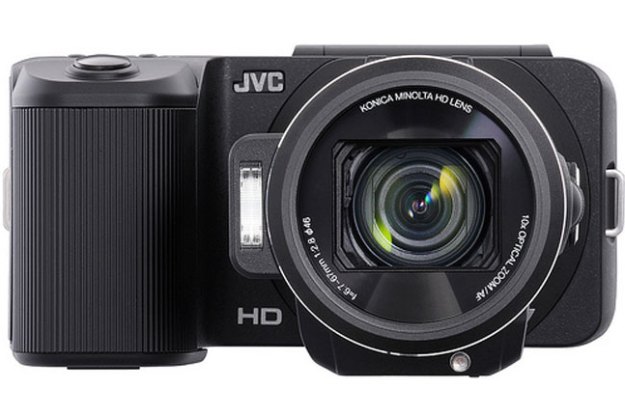 “The JVC GC-PX10 has some wonderful things going for it… and some serious drawbacks.”

JVC claims this isn’t a camcorder that takes stills,nor is it a video-shooting camera—it’s a hybrid that does both. Although it doesn’t have the sexiest name in the world, this odd-looking duck has the potential to be the ultimate two-in-one device we’ve been searching for. Let’s dig in and find out.

This is a wild-looking one. It’s unlike any camcorder on the market, but looks very similar to a Sony NEX interchangeable lens camera with a zoom lens attached. In fact, some old-timers might flash back to the Sony F505, a digicam from all the way back in 2000 that had asimilar barrel-type zoom. To show far how things have come, that camera was a whole 3 megapixels and took MPEG videos; the new GC-PX10 shoots 12-megapixel stills and captures 1080/60p movies. These specs were only the stuff of dreams back in the day. The new NEX-5N ($699 with a 3x 18-55mm lens) has a 16-megapixel, DSLR-sized sensor and takes 1080/60p movies, so they’re kind of similar. JVC has a leg up with its built-in 10x zoom but on the down side has a much smaller imaging device, similar to those found in point-and-shoots. How this impacts quality, we’ll discover shortly.

The GC-PX10 has a really thin body, but it’s hardly diminutive, thanks to the barrel lens. Overall it measures 5.2 x 2.7 x 4.8 (W x H x L, in inches) and weighs 1.2 pounds with battery, so forget about slipping this one casually in your pocket. The all-black hybrid has a substantial grip with a textured surface, making it easy to hold. Other than markings on the lens— which are hard to avoid—there’s little on the front other than a few logos which are tastefully done.

The PX10 has an f/3.2-f/8.0 10x Konica Minolta zoom lens with focal ranges of 43.3-433mm in still mode and 37.4-374mm for shooting videos. Unlike many new camcorders with wider opening focal lengths (around 28-29mm), this is bit more traditional. We prefer wider specs for camcorders and digicams,but these will suffice for most shooters. Even though the barrel offers a great handhold, the hybrid has optical image stabilization to help eliminate blur. On the top of the lens are the hot shoe and two large mics for stereo sound. You’ll find the flash and an AF Assist lamp on the front.

On the left side of the barrel are many of your key controls including power, flash adjustment, a mode dial, direct access to exposure and focus, a “set” button and a control wheel to make adjustments. The mode dial has options very similar to higher-end cameras. There’s i.Auto (a.k.a. Smart Auto, Intelligent Auto) where the PX10 recognizes the subject in front of it and adjusts accordingly. JVC uses 14 options and it works well, although newer Canons pick from 32. There’s also Program, Aperture-/Shutter-Priority and Manual (PASM), a custom User option, Scene (13 choices) as well as Touch Priority AE/AF. With this one, you can select a touchscreen option such as Face Tracking, Color Tracking and Area Select. A box appears around the subject you tap and follows it through the frame.

Below this row of controls is a compartment for various inputs and outputs including a mic, headphones/AV, mini HDMI and a DC connector for the supplied charger. On the bottom of the left side of the lens is an SD card clot; it accepts everything up to SDXC and Eye-Fi media. The GC-PX10 comes with 32GB of built-in flash memory so you really don’t need a card other than for convenience; say if you use an outboard reader. The built-in memory holds up to two hours of 1080/60p UHR video or 5,700 still images at maximum resolution, so that should tide you over for a bit.

The rear is dominated by an adjustable 3-inch touchscreen LCD rated 230K pixels. This is an OK spec but for $799, it should’ve been higher (461K or more). The screen doesn’t twist, just moves up and down, making it good for overhead or waist-high shooting. Next to the screen are the zoom toggle, playback, still-video toggle and menu buttons. A camcorder-like record button is on the far right edge, rather than the red-dot key found on many digicams. The bottom of the made-in-Malaysia GC-PX10 has a metal tripod mount and battery-release button. The supplied battery is decent, rated 270 images, or one hour of continuous video recording, per CIPA.

You get the GC-PX10, strap, battery, AC adaptor, USB and A/V cables, core filter for the USB cable, 16-page basic user guide as well as a CD-ROM with the full 76-page owner’s manual. The disk also has Loiloscope FX software for handling files.

The JVC GC-PX10 features a 12-megapixel backside illuminated CMOS sensor, the size and type found in many point-and-shoot cameras. It measures 1/2.3 inches, so it’s much smaller than the chips used in DSLRs or Micro Four Thirds editions. As anyone who has read a digital camera review in the past few years knows, smaller chips are invitations to speckles, color shifts and digital noise in low light and higher ISOs (6,400 is the maximum here). We kept an open mind as we put the new hybrid through its paces over the course of several weeks. The proof—as always—is in the prints, pixel peeping on a monitor and checking out videos on a 50-inch plasma via HDMI, as well as an HP laptop.

After charging the unit, we set image and video resolution to the max: 4000×3000 pixels stills, and 1920×1080/60p for videos. The PX10 shoots only JPEGs, not RAW files like the best cameras. Its AVCHD 1.0 movies, however, feature a compression rate of 36 Mbps, the best currently available for consumer camcorders. Even newer 1080/60p AVCHD 2.0 format clips captured by the latest NEX models are “only” 28 Mbps. It would’ve been nice if JVC used version 2.0, since that’s the standard compatible with the newest video-editing software for burning high-quality progressive video onto Blu-ray discs. Unfortunately, the unit cannot be upgraded to 2.0.

Since practically everything we tested from JVC prior to this hybrid was a camcorder, we started off shooting video, and then proceeded to test its still capabilities. The PX10 works just fine as a camcorder; we primarily shot in i.Auto. The zoom moves smoothly, and 10x was more than sufficient (we always turn off the digital zoom boost). The stereo sound is quite good, adding a nice dimension to the clips. We engaged wind noise reduction and it did an excellent job keeping the roar of the Jersey shore breezes under control. Video quality was probably the best we’ve seen, with very accurate colors and very few compression artifacts. The scenes of the pounding surf were top notch, and the PX10 focused and reacted quickly.

Now, many of clips were shot on the beach with the sun blazing away,as well as in the shade. A tougher test was recording indoors, and it was here the hybrid’s limitations showed up. Although the GC-PX10 has nine-point auto focus and an AF Assist lamp, it had difficulty getting sharp focus, particularly in low-contrast scenes. We know this is tough for most cameras and camcorders, but we have to report what we see. The footage was also noisy, which is expected from a small sensor in dim light. Although this is real negative, we must reiterate the video quality of the PX10 with enough light is among the best we’ve ever taken.

Camcorders have taken still photos for quite awhile, yet it was the rare instance quality was any good. Probably the best we ever tested was the Canon Vixia HF S20 from a couple of years ago; it cost $1,099 and captured 8-megapixel stills. We’re quite happy to report the GC-PX10 does an even better job—with a caveat. When there’s plenty of sunshine, the hybrid really shines. Image quality is spot on with vibrant, yet realistic colors. You’ll be quite pleased with them. Alas, when you go indoors, things take a turn for the worse. The PX10 had issues dealing with white balance, and in many instances color was just off. This was a big disappointment. Another bummer was our standard test for ISO. As we feared, the small 12-megapixel CMOS sensor had issues with digital noise. Our test subject was solid up until ISO 400, then colors began to shift and speckles were a real issue. Clearly this hybrid needs a lot of light, whether it’s the sun or the flash.

We did a lot of still shooting in i.Auto, but quickly spun the dial to access manual modes. Even though we’re experienced camera reviewers, we had some difficulty with the menu system, as well as adjusting manual focus using the control dial. This is completely different than a DSLR, where you simply turn the lens ring. Also the readout for aperture and exposure compensation was really small, making it hard to see. JVC also uses the word Gain in the menu system for ISO; which should just be changed. Over the course of time, we got more comfortable with the system, but it’s definitely not as straightforward as a high-end camera.

On a much more positive note, the GC-PX10 has an amazing burst mode. You can take full resolution images at 30 fps for up to 100 shots. We took several bursts of waves crashing on the rocks and the resulting files were outstanding. The only drawback is the fact the hybrid stops for at least several seconds as it saves images to the flash memory (the more you shoot, the longer it takes). We found the results well worth the wait.

During the review period, we had few issues with the quality of the LCD screen; even direct sunlight wasn’t a problem. The touchscreen also reacted well, letting you tap and swipe your way files in playback. It’s hardly the Apple iOS but it works reasonably well. All that said, the screen’s 230K resolution really doesn’t do your work justice.

Art filters are part of a new wave hitting cameras, but JVC’s hybrid doesn’t have any—even though many other models with 12-megapixel CMOS sensors do. The company should definitely jump onboard this trend. We know we originally thought they were hokey, but they’ve grown on us.

JVC has really broken some new ground with the GC-PX10 hybrid. The combination camcorder-camera takes beautiful videos and stills, but it’s hampered in low light by a small sensor. We’d love to see JVC put an APS-C sized imaging device in the next generation, even if body has to get a little thicker. The JVC GC-PX10 has some wonderful things going for it… and some serious drawbacks. As such, we can’t give it our wholehearted endorsement. Yet for the adventurous shutterbug or videomaker, this might just do the trick.