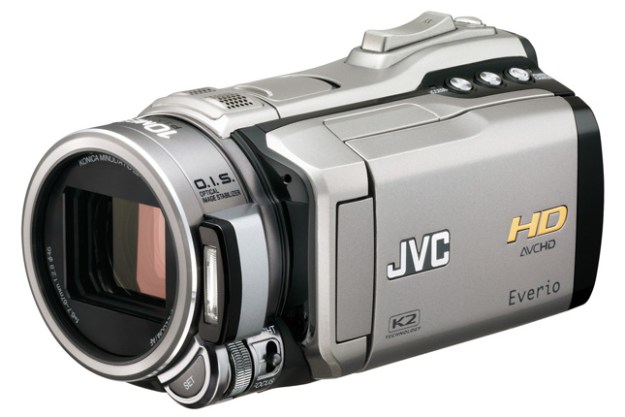 “If really high quality movies and photos are your aim, the JVC GZ-HM1 will deliver but definitely be aware of the drawbacks.”

Today everything records high-def video. Cameras like the new Sony NEX-5 do it well and even inexpensive digicams do a fairly decent job of it (forget cell phones). Yet if you want really great quality high-def movies, nothing—and we mean nothing—beats a full-fledged camcorder. Yes, they’re expensive but once you go beyond watching YouTube clips on a monitor and view colorful, accurate scenes on a big-screen HDTV you’ll be sold. We got the chance to try out the Everio GZ-HM1, JVC’s best consumer-oriented model, to see just how good a 2010 edition can be…

The silver-bodied black-accented GZ-HM1 doesn’t have the slick noir vibe of Canon’s top models such as the Vixia HF S21 but it doesn’t have the bubble-gum look of low-priced videomakers either. The long, low-profile camcorder has a sturdy, workman-like appearance and it fits neatly in your hand. With the battery attached, the nicely-balanced camcorder weighs slightly over a pound and measures 2.7 x 2.9 x 5.4 (WHD, in inches).

On the front of the GZ-HM1 is a Konica Minolta 10x f/2.8-4.5 optical zoom which accepts 46mm filters. The lens equates to 48.3-483mm in movie mode, 38.5-385mm as a still camera. It’s not the very wide angle we prefer that’s finding its way into select 2010 camcorders, but still they’re good ranges. The protective lens cover opens and closes when you power on/off the unit. Also here is a flash for improved still quality and a set button for the adjustment dial on the lower right. This dial lets you manually adjust focus and brightness. The right side has a comfortable, adjustable Velcro strap to keep the camcorder steady as you shoot.

The top is fairly basic with stereo mics near the lens, followed by a strange accessory shoe set-up. Rather than just attaching an optional mic or light directly to the camcorder via a hot shoe as top models do you first must screw in a supplied adaptor. Then the optional gear gets attached to this cold shoe. Yes there’s a mic input on the back but this set-up is clunky. So even with high hopes, we discovered right off the bat this camcorder is not perfect. The GZ-HM1 does have a nice, large zoom rocker switch as well as a dedicated shutter button for taking snapshots. Nearby are three buttons that takes this camcorder beyond the ordinary. There are aperture- and shutter-priority keys as well as a User key. When you’re in Manual you can adjust the shutter speed between ½-1/4000th of a second and aperture f/2.8-5.6. As you make adjustments with the Laser Touch slider on the left of the LCD screen you’ll immediately see if you’ve under- or over exposed your shots. The User key gives options for a dedicated mode such as white balance, backlight compensation and so on (11 choices).

The left side is where you’ll spend most of your time since it’s the home of the swing-out 2.8-inch widescreen LCD monitor. The screen is rated 208K pixels and even though it’s not a super number, the screen holds up nicely even in direct sunlight. The display is a bit small to our liking and we hope JVC bumps it up to at least a 3-incher with newer models. To the left is the Laser Touch interface which we really don’t love as it’s not very accurate and we tended to overshoot the desired setting. A physical joystick is preferred or the touchscreen system of the Canon HF S20. Hopefully JVC will update this system on its newer models.

Running along the monitor’s lower bezel are five buttons including OK and Menu. The operations for the other three keys vary with the mode you’re in. On the body opposite the screen is the SDHC card slot. Even though this camcorder has 64GB of flash memory (good enough for almost 6 hours of highest quality UXP video), having the slot is good in case you want to save your photos and videos to a card to use a reader or watch videos directly on a compatible HDTV. We were surprised this sophisticated camcorder doesn’t accept the newer SDXC cards but this really isn’t a big deal—yet. In time card makers will get close to the new format’s 2 terabytes capacity; right now 64GB is the largest while 32GB is the max for SDHC.

Other controls on the body include power on/off, play/record, Upload, Display, Export and Direct Disc. Upload makes posting to YouTube fairly simple, Display changes the amount of clutter on the screen, Export lets you transfer videos to iTunes, while Direct Disc simplifies the burning process (DVD, AVCHD and Blu-ray). You’ll find the USB out here as well.

On the back is a slot for the battery, the record button and two compartments for a variety of connections—mini HDMI, component, DC-in, headphones-in, A/V and mic in. The bottom of the Made In Malaysia camcorder has a metal tripod mount and battery release switch.

All-in-all, the JVC GZ-HM1 is a pretty straight ahead 2010 camcorder with few surprises.

The JVC GZ-HM1 is a Full HD AVCHD camcorder so it records 1920x1080i videos. It has a 10.62-megapixel back-illuminated CMOS sensor and this type of chip has much less noise than typical CMOS imaging devices. JVC claims that by using it, the camcorder records in as low as 4 lux compared to the 9 rating of last year’s HM400. Just as important, it uses the 24 Mbps codec which is the absolute best for the format. It eats up space but it’s worth it. The 64GB of built-in flash memory holds close to 6 hours at 24 Mbps, 8 hours 21 minutes at the next step down—17 Mbps (XP level). The 10.62MP sensor also lets you capture true 3648×2736 pixel stills—without interpolation. In theory all of this should add up to terrific experience. Let’s see how it performed…

We tested the camcorder over the period of several weeks outdoors in bright sunshine as well as indoors, even recording a single candle in a dark room. Top resolution photos were taken as well. When done we reviewed the videos on a 50-inch HDTV via HDMI, closely inspected images on a monitor (400%) and made full-bleed 8×10 prints with no post processing.

Before getting into the results, we’ll state the GZ-HM1 is a nicely designed camcorder and the large zoom rocker control has a great feel. You can zoom in/out quickly and accurately. Sad to say that doesn’t hold true for the Laser Touch system. We’re begging JVC to dump this for a larger full touch panel like Canon or Sony models. And while they’re changing the interface, the screen needs to be enhanced as well since it wipes out in bright sunshine (208K pixels doesn’t cut it with competitors offering 921K). Even with the smaller screen, the camcorder chews through batteries so a spare would be a good investment if you buy this one.

Those are the key negatives—the positives are the videos and stills. The movies were top notch with trees showing excellent, deep greens and flowers just the right amount of yellow, pink and red. Clips taken at the beach were also spot-on with beautiful wave reflections, accurate skies and colorful outfits on cyclists. The camcorder focused quickly and sharply, handling backlit scenes really well. We even took a video of a single candle in a dark room and there was very little noise, thanks to the new sensor. Not to say digital artifacts were completely gone but the scenes were very clean. After reviewing the video clips were very impressed as they matched the quality of the best HDTV images and even some BD disks.

JVC said they enhanced the GZ-HM1’s Optical Image Stabilization system so it would work better as you walked along and recorded. OIS was good but not perfect as there were still bumps during these situations.

Overall photos taken with GZ-HM1 are quite good, rivaling top-end Canons even though the camcorder has only one AF point versus 9 for the Vixias. Photos shot in bright light were really fine in Auto but for important images or close-ups, you should use the manual focus. Colors were accurate and the files were filled with detail. We even took stills of a candle in a practically black room with the flash forced off, a true test for the unit’s low-light capability. Results here were also very good with a minimal amount of noise. Even though the GZ-HM1 doesn’t rival a DSLR for tweaks and burst modes, you’ll be more than pleased with the results.

Late last year we had this to say about the 9-megapixel Everio GZ-HM400. “This is a very good camcorder that also takes quality 9-megapixel stills. We have issues with it (Laser Touch, wind noise) so it’s not the perfect two-in-one device we’ve been searching for. If you keep those limitations in mind, you should be happy taking it along to record life’s adventures.”

We can practically repeat this conclusion for the GZ-HM1 with its newer backlit 10.62-megapixel CMOS sensor. Videos were great, stills improved and the mic handled noise better but oh that screen and Laser Touch system! The GZ-HM1 costs over a grand at legit online dealers. If really high quality movies and photos are your aim, the JVC GZ-HM1 will deliver but definitely be aware of the drawbacks.

Topics
This new AMD feature can boost your games with one click
This gadget could turn your M1 Mac into a productivity beast
The Framework laptop is officially Thunderbolt 4 certified
Could the Huawei MateStation X dethrone Apple’s iMac?
Overclockers surpassed the elusive 9GHz clock speed. Here’s how they did it
Amazon starts drone delivery trials in California and Texas
What to expect at CES 2023, from mondo TVs to EVs
12 high-profile tech opportunities for those job hunting
Make tech work for you: 10 side gigs to make extra money for the new year
CES 2023: Intel’s new 13th-gen CPUs are faster, cheaper, and more efficient
GeForce Now upgrades to RTX 4080 for 4K 240Hz cloud gaming
Nvidia brings the mighty RTX 4090 to laptops at CES 2023
Belkin just made a huge bet on sustainability at CES 2023