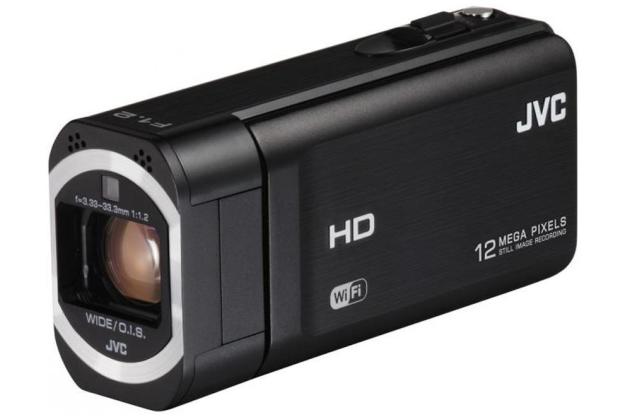 “There are some slight blemishes, but the image quality and features of this highly compact camcorder more than make up for them.”

In tech the general trend for products is to get smaller and smaller. The same holds true for camcorders: Long gone are the days when you had to hoist a large VHS camcorder onto your shoulder. As the parts get smaller yet more powerful, so does the whole shebang. But after reaching a certain compact size, you do start to encounter deficiencies like a smaller zoom range and lower quality videos and still images, for example. JVC is bucking this trend with the GZ-VX815 ($500 MSRP), their new Everio high-definition camcorder with a slender profile that is not only compact and convenient to handhold, but also sports some awesome features for capturing movies and photos.

The VX815 is a Full HD camcorder with a very thin profile. Unlike camcorders that generally sacrifice features in the name of compactness, the VX815 is fully equipped for performance. It shoots 1920 x 1080 at 60p for the best video possible in a consumer camcorder. When it comes to lens zoom, the VX815’s is a bit confusing. The 10x optical zoom lens is wide enough to zoom out to include close-in subjects. The zoom can be increased further if you opt to use the digital 21x Dynamic Zoom feature; our experience with the 21x Dynamic Zoom was good, especially when coupled with optical image stabilization (OIS). If you still want more zoom, the camcorder has two more digital zoom options at 84x and 200x ranges. The 84x increases the range, but at the expense of image pixelization. At 200s image quality is essentially destroyed, and camera vibration is severely exaggerated. In general you should avoid using digital zoom. The zoom lens is also very “fast” at f/1.2, and when combined with the 1/2.3-inch backlit CMOS sensor, low-light performance is exceptional. OIS and JVC’s digital Advanced Image Stabilization (AIS) are used to smooth out handheld camera jerkiness, which we found to be successful.

On the audio side of things, while there isn’t a microphone input port, there are manual internal microphone level settings, and a zoom microphone feature that narrows the range of audio capture as the lens is zoomed in.

JVC added some cool, fun special recording and effects modes. There are two generic types of recording and effects – those that alter time, and those that overlay images on top of your video. The time-altering effects include High Speed, Stop Motion Record, and Time Lapse. The High Speed mode shoots video at a higher rate than the standard 30 frames per second, and plays it back in slow motion. This is great for slow motion analysis of rapidly moving subjects. Stop Motion Record and Time Lapse have the opposite effect. They record a series of frames at a time, lower than the standard 30 fps, and then play the video back with a distinctive speed-up in time.

The image overlay effects include the Animation Effect, Decorate Face Effect, Stamp Effect, and the Handwriting Effect. These effects overlay graphically generated objects like hearts, stars, etc. over your video, and admittedly, may seem a bit amateurish – but they could give your event video the added personal touch where it might be appropriate.

The VX815 has very impressive still image capabilities in Photo mode. And taking advantage of the image stabilization, you can shoot 12-megapixel still images of distant subjects that are sharp and blur-free. There are other image capture features like Gain Up (shooting in low light), Continuous Shooting Speed (shooting a burst of images), and Smile Shot (detecting a smile automatically and then capturing the image).

The 3-inch LCD flips open and can swivel and tilt. It’s also a resistive touch screen which you can activate using your finger or the included stylus. Similar to a smartphone, you can press on menu icons or slide between menu screens. It’s rated at just 230k dots, so don’t expect a super bright display.

Realizing we are living in a wirelessly connected world, JVC placed a full set of Wi-Fi features in the VX815, allowing you to do the usual wireless transfers and smartphone pairing. But the best and most fun feature is Direct Monitor mode. Here, one can use their iOS or Android smart device to remotely control the VX815. But the real icing on the cake is you can actually see the video and hear the audio remotely during the recording – that hasn’t been possible in Wi-Fi enabled camcorder models we’ve tested previously. You can also use the Wi-Fi to enable image mirroring on a DLNA-compatible TV (via a network), among other features.

The VX815 has a simplified design that’s uncluttered. At the top there’s a snapshot button for taking a still image and a zoom/volume lever. The front has the lens and flash/light combo. The lens cover opens automatically when the camera is turned on, but you have to manually close it via the side switch when you power down. At the back there’s the video record button and a door that opens to reveal the DC connector, AV port, HDMI port, and USB port. One side has a grip belt and a door covering the battery compartment, while the other side is where you’ll find the speaker, image stabilizer button, and power button covered by the LCD panel. The SD card compartment and tripod mount are located below.

We tested the camcorder by recording a bunch of video and still images around Las Vegas and the California desert, under various lighting conditions including bright sunlight and indoors.

Video shot at1080/60p resolution – the highest possible – looked colorful, detailed, and lifelike when played back directly through the HDMI cable to a 52-inch HDTV. Captured JPEGs at 12 megapixels looked exceptionally sharp and colorful, as well, on the big screen. We were surprised how good even the lower-resolution 2-megapixel widescreen stills looked.

It’s one thing to test the performance of any camcorder in a well-lit environment, but it’s a more severe test to see how well the camcorder can shoot in a low-light setting. The combination of the VX815’s back-illuminated CMOS sensor, along with its GAIN UP/Auto-Slow Shutter feature is designed exactly for these conditions. We shot scenes indoors with dim lighting, as well as outdoors at night, and were impressed with the brightness of the images, without significant increase in video noise (that’s not to say you won’t encounter any noise, because you will).

With the special recording and effects modes, we had the most fun with the time-altering effects, especially Time Lapse and High Speed. Time Lapse mode offers the choice of recording a frame of video every 1, 2, 5, 10, or 20 second intervals. This results in a time speedup from 30x to over 600x, respectively. If you wanted to capture a sunset over the ocean, you might select the 1-second interval, which will result in a 30x speed-up in time; so, a 30-minute sunset in real-time would take 1 minute in Time Lapse mode. All Time Lapse video is recorded in AVCHD format, which played back beautifully on our TV.

At the opposite end of the time-altering spectrum is High Speed, which results in high-speed motion being slowed down – a 1/5x slow-down in motion recorded. Unlike some other camcorders that only allow you a short interval of time to record in their high-speed mode (like Sony with their 3-second Smooth Slow Record), with the VX815 there’s no time limit. We had great fun recording cars and sports activities, then analyzing the results in slow-motion playback. You could do similarly with surfboarders, windsurfers, baseball batters, etc.

We had minor issues with the zoom control. One of the most challenging techniques while shooting with a small profile camcorder is getting a smooth zoom, which is the mark of a more polished videographer. Unfortunately, because of the design of the zoom control, we were unable to get consistently smooth zooms. They would sometimes jerk and change zoom speeds at unpredictable moments. It took lots of practice to get something close to a smooth consistent zoom, and it was never perfect.

The resistive touchscreen LCD menu was sometimes tricky to navigate using our fingers. For example, the settings menu for shooting video has three pages – video recording format, zoom, video quality, microphone levels, etc. If we wanted to make changes, we’d have to laboriously scroll through the menus, and sometimes the menu buttons wouldn’t respond until after several button pushes. Maybe it was our fat fingers, but we would have liked a more responsive LCD menu screen. With that said, we acknowledge that it’s pressure sensitive and JVC clearly states in the instruction manual to use the provided stylus, but there’s a reason why nobody uses PalmPilots anymore – stylus aren’t convenient.

Probably the biggest negative was the limited battery usage time – typically 45 minutes. And it takes more than three hours to charge it back up. So if you are doing some serious shooting away from home power, you will absolutely need a spare charged battery.

The JVC GZ-VX815 packs a hefty set of features – high-definition video capture, 12-megapixel photo capture, and just plain “fun” features – all in a small profile that will fit quite comfortably in your pants or shirt pocket. Think of it as the better way to capture video and still images than on your smartphone (if you got one of those, you can pair it to the camcorder for remote operation). There are issues with the zoom control, battery life, and navigating through menus on the LCD touchscreen, but the image quality and features more than make up for these blemishes.

Topics
2024 Chevrolet Equinox EV aims for affordability with $30,000 base price
HP unveils new IPS Black monitor with one key new feature
New VESA display standard makes it easier to pick a monitor
Android 13 is here, and you can download it on your Pixel phone right now
AMD quietly slashes the prices of some of its best CPUs
A keyboard with its own CPU and GPU? Yes, it’s real — and it’s coming soon
The dream isn’t over — AMD’s RX 7900 XTX may still hit 3GHz
Great, now even the RTX 4090 power connectors are starting to melt
Best Samsung Galaxy Note 20 deals for November 2022
Nvidia’s RTX 4080 may be up to 45% slower than the RTX 4090, but it’s still pricey
We’re lovin’ this official McDonald’s gaming chair — the McCrispy Ultimate
Scientists find a surprising answer to the future of computers — paper
The Framework laptop is officially Thunderbolt 4 certified