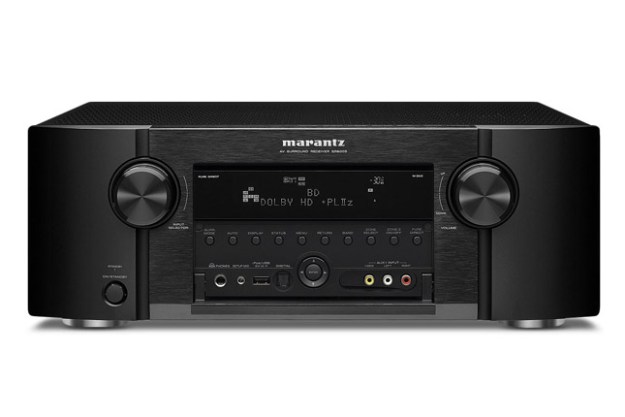 “The Marantz SR6005 strips out some bells and whistles, but still remains one of the most powerful and user-friendly receivers in its price class.”

This time last year, we lauded Marantz and its SR6004 AV receiver for maintaining the company’s legacy of high standards in audio performance in an up-to-date package that offered all the bells and whistles you could ask for. The SR6004 sat just below the top of Marantz’s AV receiver line, with an MSRP of $1,249. This year, Marantz offers the SR6005 which also sits just below the top of their AVR line, but with a $999.00 price tag. Despite model numbers that suggest the 6005 is a direct replacement for the 6004 (hey, it’s just one digit, right?) a closer inspection reveals some key differences between the two. In fact, the 6005 looks more like last year’s 5004, a step lower in the line-up.

Confused? Don’t be. In this review, we take a look at those key differences and determine if the changes are worth the $250 difference in price points.

Like the SR6004, the SR6005’s power supply section is ample and weighty. The SR6005 comes in at 26 lbs, which, again, is a positive indicator of overall build quality. However, that number seemed a little lower than we had expected, so we looked back at our notes on the SR6004 and saw that it weighed in at 28 lbs. That’s certainly not a huge number, and may not necessarily point to anything at all, but we just can’t help but wonder: Where did those two lbs go? Meaningful or not, the scales offered the first indication that the SR6005 didn’t appear to be a carbon copy of its numerical predecessor.

As we dug through the provided accessories, we noted everything appeared to be in order. Remote, batteries, Audyssey calibration microphone and user manual were all in place. Ah, but what is this? No Bluetooth adapter. While the SR6004 came with Marantz’s RX101 Bluetooth receiver, the SR6005 does not. Bummer. We really liked that Bluetooth receiver, but since the RX-101 is only $100, you can still purchase one separately without getting all the way back to the SR6004’s $1249 price point.

The SR6005’s appearance is a dead-on match for the SR6004. The verdict: Still sexy. We still dig the radius edges on the left and right side of the 6005’s front face, the two large control knobs, the smoked-glass view panel and its drop down panel that hides various inputs and control buttons. It’s a stealthy, clean look that really sets Marantz apart. Let’s face it, we can’t help but listen with our eyes just a little bit.

The SR6005 adds two HDMI inputs to its rear panel for a total of 6 HDMI 1.4a inputs capable of supporting 3D video, and HDMI audio return. The unit is also equipped with just one HDMI output (the SR6004 had two), three component video inputs, and four composite video inputs. No more S-video this year. Those still clinging to S-Video devices like Laser Disc players, S-VHS players and PlayStation 2’s will have to settle for a composite connection. Under the front panel, we found one set of composite video and analog audio inputs, a digital optical input, a headphone output and a USB input for use with iPods, iPhones and USB memory devices.

If multi-room audio and video are your thing, the SR6005 can pull off some really cool tricks. Not only can it output component video to two other zones, but it will also provide digital audio processing and output for those zones. This means no more connecting extra stereo analog cables from your components just to get some audio to go with the picture you are sending to other rooms.

The SR6005 will upscale all analog video signals for output via HDMI via an ABT2015 video chip – a departure from last year’s use of an i-chips video processor. Unfortunately, unlike the SR6004, the SR6005 will not decode and play back DSD/SACD audio streams via HDMI. This is a feature most folks don’t really care about, but being the audio geeks we are, we couldn’t help but be a little disappointed and then wonder: Why? So, we looked even deeper and found that not only does the SR6005 use a different video chip, it also uses a different digital audio processor. Whereas the SR6004 used a Texas Instruments chip for the critical digital-to-analog conversion process, the SR6005 uses Analog Devices’ SHARC chip – the same chip that Denon components currently use.

We were also disappointed to see that the SR6005 doesn’t offer an Ethernet port. This requires that any firmware updates that Marantz may offer in the future be uploaded by an authorized service center. It also means that the SR6005 will probably never be able to support Marantz and Denon’s new AirPlay streaming music feature, nor is it likely to support any other Internet-based music application.

To evaluate the SR6005, we connected an LG BD-370 Blu-Ray player, an Xbox 360, a Nintendo Wii, a VIP722 Dish Network receiver, Pioneer turntable with Ortofon OM5E cartridge, and an iPhone 3G. We used speakers from Aperion Audio and Axiom Audio.

For most of our audition, we used the settings we made during a manual calibration. We’re very familiar with the Audyssey MultEQ calibration system and, while we do appreciate the accuracy with which it sets channel levels and distance settings, we’ve never been particularly huge fans of the setting it makes for crossover and EQ levels. Still, we ran Audyssey and engaged its EQ settings periodically through our audition. We felt that we got a more even response from our speakers during music playback with Audyssey MultEQ and Dynamic EQ turned off. We did feel, however, that engaging both EQs for movie playback at lower volumes significantly improved the movie watching experience. We were better able to get a sense of impact and surround feel even at “late night in an apartment” volume levels.

We decided to use the same recordings to audition the SR6005 as those used in our SR6004 review. Those recordings included Mark Knopfler’s Get Lucky, Pink Floyd’s Dark Side of the Moon on multi-channel SACD, Allison Krauss and Union Station’s New Favorite on SACD and Marcus Miller’s CD Sun Don’t Lie. We also added in the movies Avatar, The Incredibles and, just because it was that kind of a day, Armageddon.

As we re-listened to our selections, we were reminded of what we liked so much about the SR6004. Reminded, but not transported back to. While the SR6005’s ample power and excellent build quality shone through, we were aware of a slight loss of warmth and intimacy that we had experienced previously. During Get Lucky, we felt like the woodwind and string introduction didn’t have the three-dimensional quality we remembered. It was a very nuanced difference, but definitely there. When listening to the Dark Side of the Moon multichannel recording, we were pleased by the seamless surround stage and clear, distortion-free bursts of sound effects, but also felt that some of the individual channel definition had been lost – again, a nuanced, but recognizable change from the SR6004’s performance. We continued with our listening and continued to be impressed, but every time we came back for more listening, we just felt something had been lost with this new model. We just weren’t as endeared to the sound of this receiver as we were with the SR6004.

During our movie clip auditions, the power that the SR6005 houses under its chassis was evident. Even at challenging volumes, the SR6005 showed no sign of strain. The screaming trumpet flourishes mixed with dynamic sound effects during The Incredibles came off with an ease not often heard from receivers in general, let alone those at this price point. During Avatar, we listened closely to the center channel, since this movie’s dialogue track has been challenging in the past. The SR6005 delivered the often subdued center channel information with authority and intelligibility. As for Armageddon, well, it stayed true to its terrific soundtrack and terrible acting. The SR6005 wasn’t able to improve the movie, but it delivered the film’s stunning surround effects very well. The SR6005 has plenty of power in reserves for the most demanding sequences, and never let us down.

Perhaps it is a little unfair to make such a direct comparison between these two receivers. After all, the SR6005 does read more like last year’s SR5004, and with a price tag to match. However, given its place in Marantz’s line, we had hoped that its performance would be exactly the same, with just enough changes to included features and accessories to make for a lower price point. That its performance isn’t exactly the same as its predecessor doesn’t take away from the fact that the sound is still distinctly Marantz. When you combine that with its stellar feature set and comprehensive capabilities, the SR6005 turns out to be an exceptional AV receiver.

Marantz’s M-DAX processor proposes to deliver better sound when playing back low-quality digital music files via USB. First up: the iPhone. The software built in doesn’t play nice with the oldest versions of iPhones and iPods, so we weren’t able to test it with our iPhone 3G. However, it provides playback functions such as play, pause, stop, track advance and manual search are available, as is cursor navigation of the iPod or iPhone’s song list. It also works with video-file playback, but will only reproduce the audio track. No video signal is passed through. We were able to engage the iPhone in “direct mode,” which allowed us to play our audio files, but all control was restricted to the iPhone. Next, we connected a USB flash drive with several layers of folders that contained music and non-music files. We included .mp3, .m4a and .wma files of varying bitrates, but quickly found out that the SR6005 only supports lower-bit-rate .wma files (up to 192kbps). All of the music files were also available through our iPod interface.

Playback from the USB flash drive sounded identical to playback from our iPhone, which stands to reason. In both cases, the sound quality was far better than what we were able to achieve through the iPhone’s headphone output. The background was totally quiet, and we felt we were able to hear more depth from the music files, no matter the bitrate. We then engaged the M-DAX processor to see how it affected the sound quality. The M-DAX’s three different levels of effectiveness were like three different stages of a “loudness” button: As we proceeded from low to high, the lowest bass and highest treble regions got another bump in the EQ. The processor also seemed to steal the depth out from the soundstage, but we feel the effect may be desirable for some that like their music to sound a little more robust in general.

While Marantz’s SR6005 didn’t woo us the way their SR6004 did, it still makes for an excellent AV receiver in the sub-$1,000 price level. Changes made to the processing chips seem to have resulted in a subtle loss of audio finesse, but don’t take much away from Marantz’s signature sound. To be sure, the SR6005 is one of the most powerful and user-friendly receivers in its price class. It doesn’t earn our Editor’s Choice award, but still comes highly recommended for those seeking a feature-rich receiver with audiophile-approved sound quality. Just pay attention to your input and output needs before choosing the SR6005.

MacOS Ventura is official, with more ways to be productive