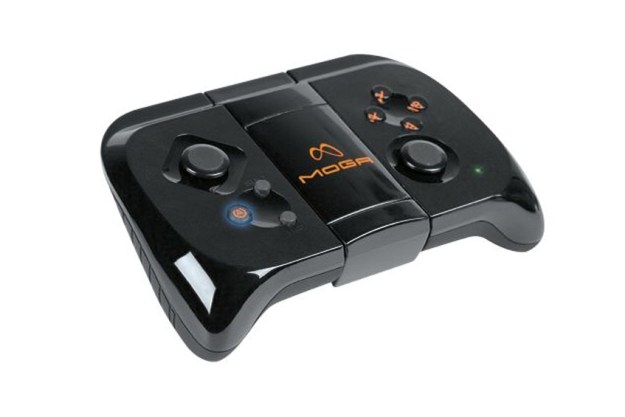 “Although the Moga may not be the first Android controller on the market, it is by far the best, and likely a glimpse at the future of gaming.”

If you ask 100 developers what they think the future of gaming holds, you may very well get 100 different answers and no real consensus — with one exception. There is no denying the rise of mobile gaming both as a force within the larger gaming industry, as well as a trend that affects the more than 100 million smartphone owners in the world. And with that number expected to rise to closer to a billion by the end of the decade, mobile gaming is certain to increase as well.

Even as mobile gaming grows, a wall still separates smartphone gamers from hardcore gamers who own handheld gaming systems like the Nintenodo 3DS: Phone seldom have physical controls, and interacting with a touchscreen phone is not the same as playing a game with a controller. There are intrinsic limitations that simply cannot be overcome. At least not without help.

The Moga controller from Power A is a natural evolution of mobile gaming, adding console-style controls to supplement touchscreen phones. Other companies have tried to introduce similar models in the past, but to limited success. Some were plagued with design flaws, while others were simply victims of bad timing. Whatever the sins of the past, Moga may very well usher in the next wave of mobile gaming.

The controller itself features two analog sticks, four face buttons, and two shoulder triggers. It runs on two triple AAA batterie that can last over 15 hours, connects to Android phones via Bluetooth, and is built around a sliding clip that can cradle most smartphones. It can also be used as a standard wireless controller with the slide tucked in.

The controller is designed as a rectangle with rounded corners and slightly extended points at the bottom, which help with your grip. It feels natural in your hand, and the buttons are laid out in a way that feels organic – or at least laid out in a way that you will instantly feel accustomed to if you are console gamer.

When a smartphone is cradled in the slide, the Moga feels a bit unbalanced. The controller itself is fairly lightweight, so adding a heavy smartphone tips it backwards. Because of the shoulder triggers, the slide does not fold all the way back, but rather leaves the phone at an angle. The weight of the phone will continually pull at the unit, and balancing it in your hands may take a bit of getting used to, but this is a minor concern. Besides, if it does bother you, you can always opt to put the phone aside and use the Moga at a distance.

The only real complaint to be levied at the hardware is the analog sticks, specifically the right stick (assuming you are right handed). The right analog is lowered to make room for the face buttons, which already causes you to stretch your thumb more than you might normally. That wouldn’t be an issue at all, but the analog stick is short and stiff. Those two factors combined make quick movements in games with targeting more of a challenge than you might at first expect. You get used to it, though.

On the software side, the Moga bumps into one major caveat: It needs to be paired with games that are specifically designed to for it. Those game don’t need to be built from the ground up with Moga in mind, but developers need to add compatibility. Right now, there are only 40 title supported, but as long as game publishers see the potential, we anticipate many more titles with time. Without those developers and publishers, the Moga can’t succeed, so buying one now remains something of a gamble, but it is an unavoidable one with acceptable risks.

Developers that do start designing with the Moga in mind will have plenty to work with. The six buttons aren’t quite on par with the now-standard eight-button controllers, but for mobile games built around touchscreens, they open a lot of doors. As smartphones grow more powerful, the Moga can turn an Android phone into a gaming device that can rival all but the most powerful of handheld gaming devices. Smartphones aren’t quite near the level of the Vita or 3DS yet, but they will get there. It’s just a matter of time.

Despite a few very minor nitpicks, the Moga is not just an excellent peripheral, it’s potentially a massive forward for mobile gaming. The only real gamble is whether or not developers will line up to design games around it, or modify existing ones for compatibility.

We think the risk of low adoption is fairly minimal though, because its a developer’s own interest to make their games work with the Moga. Those developing mobile games are going to be all in favor of anything that helps to further the appeal of their industry.

One thing I haven’t mentioned yet is the cost. At under $50 for a controller that can completely change your gaming experience, the Moga is not just inexpensive,  it’s a steal. Although the Moga may not be the first Android controller on the market, it is by far the best, and is likely a glimpse at the future of gaming.