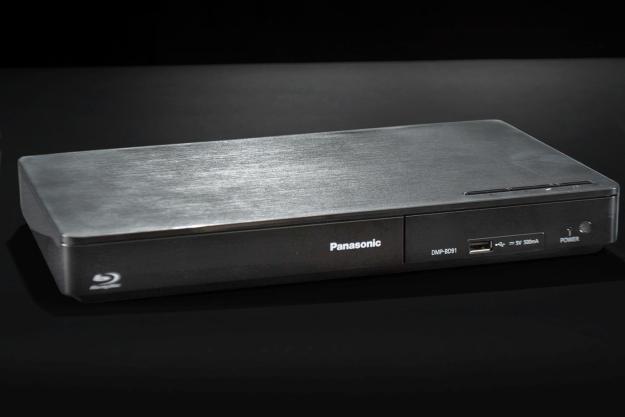 “Panasonic’s DMP-BD91 offers some bang for the buck, but if you can spare a few dollars, we recommend stepping up a rung or two.”

Blu-ray players have finally reached budget status. With price points dropping below the $100 line, those with HD flat screens are running out of reasons not to jump into the land of Blu.

Case in point, Panasonic’s new DMP-BD91, which is now available for a cut-rate cost of around 85 bones. Offering Wi-Fi, solid performance, and a succinct handful of all your favorite streaming apps, the BD91 is an alluring choice for the bargain hunter. But, like all budget devices, you’ll have to make a few sacrifices to save that extra chunk of change.

Pulling the BD91 is basically a pared-down version of its $130 sibling, the DMP-BDT360, both inside and out. In fact, though its lighter frame and plastic exterior gave away its price point a bit, its smaller dimensions make it look even sleeker than the 360. The compact size, and faux brushed-metal exterior in black combine for a very attractive aesthetic.

Accessories include a removable power cable, a pair of AA batteries, and Panasonic’s standard Blu-ray remote control, which is the spitting image of what comes with the BDT-360, almost key for key.

The BD91’s similarities to the BDT360 are quite striking at the onset – so much so that we found ourselves comparing the two constantly throughout our evaluation, like a teacher judging the sibling of a former student. That’s a little unfair given the price difference, but they’re both pretty affordable players.

The compact size, and faux brushed metal exterior in all black combine for a very attractive aesthetic.

What do you lose by shedding $45 from the price tag? The BD91 isn’t 3D compatible, there’s no digital display on the front face whatsoever, and the back only supplies a single HDMI output and an Ethernet connection, with no dedicated audio output. That limits the device’s connection options for sound bars and the like, forcing users to buy HDMI-ready devices, or connect directly to the TV, which could potentially limit sound quality.

Speaking of sound, the system also won’t support full hi-res (24bit/192kHz) audio like the 360. And though it can pass through surround codecs for both DTS-HD Master audio, and Dolby TrueHD, it can’t decode the latter in full surround sound. Finally, unlike the 360, the player doesn’t offer Miracast for mirroring Android phones, though the feature was pretty buggy for video when we tried it with the 360 anyway.

It also lacks 4K upscaling, but since 4K TVs have on-board upscaling processors, that aspect should be of little concern.

So just what does the BD91 have to offer? For starters, it’s fairly snappy and intuitive for the price, thanks in part to a remote with handy hotkeys like the Netflix key, Option key for basic audio and video settings adjustment on the fly, and the Pop-up Menu key, which is a shortcut to your Blu-ray disc. Wi-Fi support is also a big win, and something we’re used to seeing on devices above the BD91’s paygrade.

While it’s pared-down interface limits its functionality, it also allows for easier navigation than its feature-flush cousin, which is what makes the player most enticing for novices or casual users. It also has fewer moving parts liable to break down than the BDT360: The 360’s entire front face opens to eject a disc, while the BD91 only opens the cover over the disc tray itself.

The BD91’s main interface is laid out in the same crossbar of tiles as the BDT360: setup, photos, music, videos (including Blu-ray) and network. But generally, there are fewer ways to get lost when moving around the interface thanks to its simpler feature set. The player can still do some cool tricks, like offering personalized user profiles for wallpaper, pulling media like from DLNA devices, and adjusting basic video and audio settings (though it has only two as compared to the 360’s four).

Wi-Fi support is something we’re used to seeing on devices above the BD91’s paygrade.

While the Netflix hotkey is great for jumping straight to Big Red, the rest of the apps can be found by clicking the Network Service tab, under the Network tile. There you’ll find all the big names like YouTube, Hulu Plus, Facebook, Twitter, Pandora, Vudu, and the grand prize, Amazon Instant, which the more expensive 360 inexplicably omits. We contacted Panasonic over the mystery, and they informed us that the BDT360 will be getting an update to include the app in the near future.

Be warned, though, there’s no access to Panasonic’s app market, so what you see is what you get. But for most users, the supplied bounty should suffice.

The BD91 wasn’t quite as speedy as other middle-of-the-road offerings we’ve evaluated, but it wasn’t far off either. Loading normal-sized Blu-ray discs took around 18 seconds, putting it about 6 or 7 seconds behind the BDT360, the Samsung H6500, and other name-brand competitors in their league.

Netflix offered similar results. We clocked the loading of the main screen at an average of around 16 seconds, about 7 to 8 seconds behind our mid-tier samples. Overall, the system was smooth, with little to no lag to complain about.

While not everyone will be bothered by the lack of a digital display, we found it off-putting to have no counter, play/pause indicator, or any of the other essentials. Only a red light even tells you if the player is on.

We’re not sure, but we have the feeling that Panasonic used the same video-processing chip in both the BDT360 and the BD91 – we again reached out to Panasonic to confirm, but the company would not disclose the information. Our dual test copies of films like Oblivion, and Star Trek: Into Darkness looked fantastic, rendered with rich, saturated colors, clear details, and well-defined lines along the edges that moved fluidly along our single test screen. Try as we might, we didn’t dig up any notable holes in the BD91 here.

For more advanced users, audio playback may be a different story. As mentioned, the BD91 won’t render top-tier hi-res FLAC and WAV files like its sibling, and also can’t decode Dolby Digital, or Dolby TrueHD in surround mode. Most users with modern home theater systems won’t have to worry about that, as the AV receiver will carry the load. But those with older systems may want to think twice, as they may not be able to render full HD audio resolution from discs sporting Dolby TrueHD audio, thanks to the BD91’s shortcomings.

With Wi-Fi, good video performance, and an intuitive interface, Panasonic’s DMP-BD91 certainly offers bang for the buck. However, moderate to advanced users may find omissions like 3D, Dolby decoding, or even a digital display a lot to give up. For basic Blu-ray playback and streaming (especially Amazon Instant), this unit will definitely do the trick. But if you can spare a few dollars, we recommend stepping up to the BDT-360, the Samsung H6500, or similar options on the next rung.