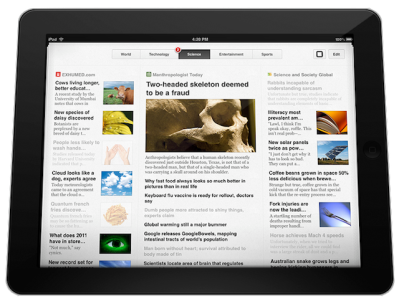 Word on the street is that Apple is expected to announce a new subscription plan for newspapers soon. While Apple hasn’t confirmed this rumor, The San Jose Mercury News reported Apple is in talks with major metropolitan newspapers to “recreate the traditional print model” in tablets and e-readers.

Newspapers have been cautiously eying tablets like the iPad as a new revenue stream as they struggle with declining print circulation and free-falling ad sales.

According to the paper, Apple plans to claim 30 percent share of revenues from newspaper subscriptions sold via the iTunes online store. It will also take a 40 percent cut of advertising revenues generated by the publisher’s iPad application that displays the newspaper.

As expected, publishers are not happy with these terms, preferring to pay a flat fee rather than giving Apple a cut of subscription and advertising revenues, the article said. Publishers originally requested app editions to be offered as subscription bundles alongside their traditional print efforts instead of going through Apple to reach subscribers.

The paper also claimed Apple has agreed to an opt-in feature to allow users to share personal information with publishers and media outlets.

While a handful of national papers already offer app subscriptions to iPad users, major metropolitan papers across the country are just getting ready to roll out their own publication apps. Media heavyweight News Corp. is planning to introduce a new national digital newspaper distributed exclusively via mobile handsets and tablets later this year, and last month Apple enabled People magazine  to give their subscribers the iPad editions for free.

Allowing publishers to sell subscriptions for their iPad editions is a logical next step, if the terms can be agreed upon.