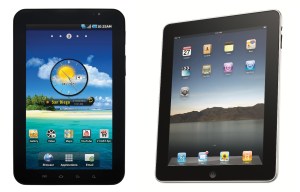 Earlier this week, it was reported that Apple filed a lawsuit against Samsung for allegedly copying its iOS products with the Galaxy line of smartphones and tablets. Samsung responded quickly with promises of a possible countersuit, and now the threat has been made good on.

The South Korean tech company has hit Apple with multiple lawsuits, claiming that the iPhone and iPad infringe on 10 Samsung mobile tech patents. The company is calling for the infringement to stop and compensation, Reuters reports.

“Samsung is responding actively to the legal action taken against us in order to protect our intellectual property and to ensure our continued innovation and growth in the mobile communications business,” a statement from the company read.

Making this entire situation trickier is the business relationship that exists between Apple and Samsung alongside their competitive behavior in the mobile market. The iOS developer was one of Samsung’s top customers for semiconductors and display panels in 2010, accounting for roughly four percent of the company’s total revenue for the year. There’s still no word as to whether or not Apple’s access to these supplies will be affected, or what would happen if the flow were suddenly cut off.

Did Apple just forget about its brand-new Studio Display?

The growing list of tech companies’ responses to the Ukraine War