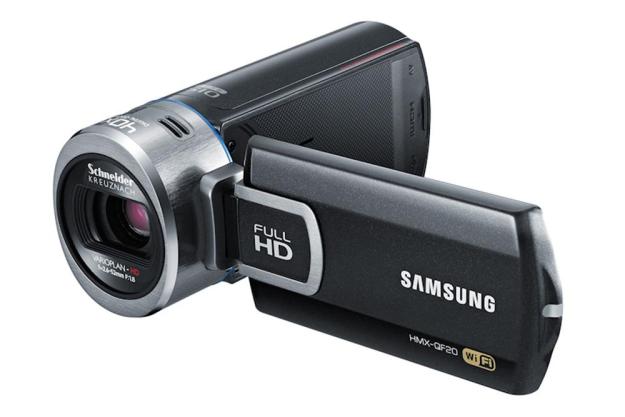 “Without top-notch convenience or some pretty impressive imaging results, potential consumers may find the HMX-QF20 juggling too many pros and cons to make a worthwhile purchase.”

Samsung’s HMX-QF20 falls into the long line of nearly-pocketable camcorders making a play for the FlipCam–sized whole left in the market. Not quite a true pocket cam, not quite a full-sized camcorder, the $300 cam pairs decent image and video quality with a slew of features – like wireless sharing, 20x optical zoom, and a 2.7-inch touchscreen – to lure entry-level consumers. But is there enough to justify the upgrade from one of several cheaper competitors? Read on to find out if Samsung can convince us the HMX-QF20 is worth your cash.

The HMX-QF20 is an undeniably tiny piece of equipment – in fact in terms of portability it might even beat out some point and shoots. The tube-shaped camcorder has a strap to slip your hand into along the barrel, although anyone with medium to large hands won’t be able to get all four fingers in it. Even on the loose side, it helps with one-handed shooting.

As you might assume given how small it is, the HMX-QF20 is also incredibly lightweight, which ends up being both a pro and a con. It’s beyond easy to throw into a bag or even carry around in-hand, but when filming without a brace or tripod, the lighter the model, the more obnoxious the hand-shake effect.

The HMX-QF20 earns a passing score for its aesthetics and in-hand feel. Cheap materials and such a tiny hand strap make the camcorder feel almost toy-like, but in return you get a camcorder you can slip in a bag – even a very tiny bag – and be on your way. Given Samsung’s goal of catering to entry-level consumers who prioritize convenience, the build makes sense, even with the side effects. The simple form factor also makes the HMX-QF20 more versatile: Hinging your wrist will immediately send you into vertical mode as the touchscreen controls rotate to adjust, and left-handed users will love that fact that you can simply flip this thing over and go.

The HMX-QF20 comes with a charger, user manual on CD-ROM, USB cable, and composite video output cables – it will accept mini HDMI, but you’ll need to buy your own.

The lack of hard buttons on the HMX-QF20 can lead to some very minimal confusion, most notably the total lack of a power button. The camera turns on when you flip out the screen, and off when you shut it. You can also hold the home button to turn it off. Though it prevents button clutter, a hard power button is a pretty strange elimination to make.

Luckily, the in-camera interface is incredibly easy to navigate. The right-hand side and lower banner of the screen display the controls — a familiar setup. We had hoped to use the zoom toggle on the back of the barrel to navigate inside menus, but everything must be done with touch, besides the home button. Still, the touchscreen was responsive enough to prevent an issue, and given that the HMX-QF20 is a reasonably simple camcorder, there isn’t much digging to do. Hitting the home button will you bring you to all the available options: smart auto, manual, art film, art time lapse, vertical HD recording, album, social sharing, auto backup, TV link, and settings. From here, you’ll make your selection, then be taken to that display screen where you can start recording or shooting, manipulate exposure along with other settings, and even use manual focus if you so choose.

The touchscreen only tripped us up on screens where we needed to scroll. Instead of revealing the next page of options, we’d often accidentally select something and have to paw backward through the menu, which quickly gets frustrating.

For all the HMX-QF20’s simplicity, it has a surprising amount of features, starting with its touchscreen. The 2.7-inch, 230,000-dot touchscreen is responsive and we never had any frustrating moments of tapping to oblivion to make a selection. Unfortunately, it does not hold up well in sun at all. Recording video with the HMX-QF20 outside is actually a challenge given how bad screen glare is, and we found ourselves halfway guessing whether or not we were getting the desired shot. Even cranked to maximum brightness, it couldn’t combat direct, bright sunlight.

The HMX-QF20 has a 20x optical, 40x digital zoom lens, which is fairly impressive but unfortunately difficult to use in practice. It’s tough to control how fast or slow you use the zoom; this was made somewhat easier using the touchscreen zoom control.

In additional to manual mode, there are also a handful of art filters for still and video capture, including Western, Sepia, Noir, Negative, and more. This is a nice touch, given how popular point and shoots with creative options have been, and a smart trend for consumer camcorders to include as well. The time-lapse features also offer some interesting ways to play around with video.

Without a doubt, the most bankable feature of the HMX-QF20 is its wirelessly sharing and saving option. You can share photos and videos to Facebook, YouTube… and Picasa. Flickr or even Twitter seems like a better choice, but at least the first two platforms make sense. Unfortunately, we had issues connecting and sharing to Facebook, which could be blamed on using the social network’s security feature that requires a check in when logging in from an unusual device. There’s a step missing here, and instead of sending your phone the “enter this code to gain access on a new device” prompt… the login attempt simply shut down without notification. And as you might expect, typing in your credentials is a giant pain thanks to the tiny screen.

If you are a committed Samsung buyer, the AllShare platform makes things easier. You can wirelessly backup all your camcorder content incredibly easily with the service, and if you’re using a camera with AllShare, then you might have an added incentive to easily keep all your visual content together with the press of a button. If you have one of Samsung’s Smart TVs, you can transfer photos there as well.

Up until this point, we’re inclined to say the HMX-QF20 is a pretty good buy: It’s portable, lightweight, and has a lot of features that the latest generation of consumer level camcorders should have, like touchscreens and wireless sharing. The shooting quality though, is only average.

This isn’t a huge surprise, given the HMX-QF20’s 5.1-megapixel, ¼-inch sensor. Also, you need to read between the lines on the cam’s resolution: Instead of 1080p, it records 1080i at 60 frames per second (fps) or 720p at 30fps, which is a small point but worth mentioning difference.

When compared to cameras of a similar price point – those that you could throw in the ‘Flip cam’ segment – the HMX-QF20 holds its own but doesn’t do much to impress when it comes down to pure video results. The manual focus is a nice touch, but it’s something popping up in more and more camcorders, making it less of a standout.

Stills, as you might imagine, are poor to bad in low lighting and incredibly grainy on anything much bigger than that 2.7-inch screen. You can use the art filters for some added effect, but at this point most of us are better off using our smartphones.

For casual video capture, the Samsung HMX-QF20 is an admirable camera that won’t break the bank. It’s easy to use once you overcome any touchscreen phobias, and offers abundant manual settings and other in-camera features to explore.

But there’s nothing overwhelming about what’s inside the HMX-QF20. No one will be blown away by the amazing image quality here. Its convenient form factor and undeniably useful wireless backup and sharing features are compelling, but still clunkier and slower than even a basic smartphone. Without top-notch convenience or some pretty impressive imaging results, potential consumers may find the HMX-QF20 juggling too many pros and cons to make a worthwhile purchase.

Topics
Apple has a bunch of new products coming, but not this year
This new Windows 11 feature will help you protect your passwords
Logitech’s new webcams are an alternative to Apple Desk View
How much storage do you need on your new iPhone 14? Here’s how to decide
Scientists find a surprising answer to the future of computers — paper
The Framework laptop is officially Thunderbolt 4 certified
EVGA’s lost RTX 4090 prototype shows us what could have been
Microsoft’s DirectStorage can now boost your game loading times by 200%
Here’s how you could protect your RTX 4090 from melting
Someone built a PC in a microwave, because why not?
Update Windows now — Microsoft just fixed several dangerous exploits
Nvidia’s RTX 4080 12GB may soon return, but not how you think
This gadget could turn your M1 Mac into a productivity beast