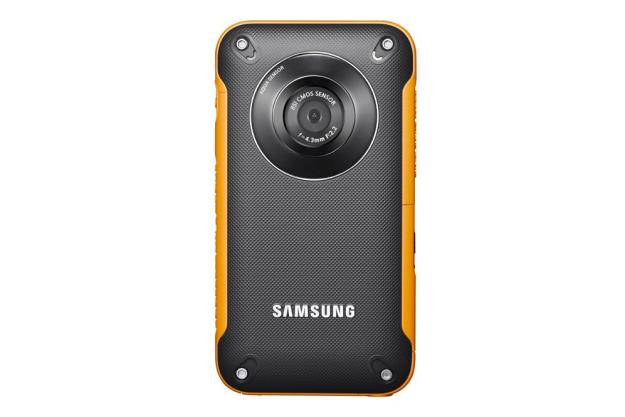 “For anyone not willing to make a big investment in a hand-held camcorder yet, this damage-resistant, inexpensive, flexible device could fit the bill.”

If you believe point-and-shoot cameras replaced the need for camcorders, and smartphones replaced the need for point-and-shoots, Samsung’s HMX-W300 handheld camcorder may look like an antiquity. But its appeal lies more than skin deep. For those who plan to shoot video camping, hiking, swimming or anywhere else smartphones fear to tread, Samsung’s rugged HMX-W300 still has some appeal no smartphone can deflate. So for everyone out there in search of a handheld, inexpensive, underwater, tough camcorder, listen up: We have a $139 contender for you.

The HMX-W300 is surprisingly lightweight for a tough camera. Generally, these things are so determined to thwart the likes of cement, water damage, dust, and whatever else you can throw their way that they end up being rather bulky and heavy. This isn’t the case here. The W300 is actually small enough to slip into a jacket or even back pocket, and light enough to keep around the wrist or in a bag.

While it’s lightweight, the actually chassis leaves much to be deserved. It feels cheap and toy-like instead of serious and professional. For the price and target audience, it’s not supposed to be, but you still want your equipment to look good regardless of how simple it actually is. Sony’s Bloggie lineup isn’t professional devices by any means, but its cameras have a uniform sleekness to them that leaves a solid impression. In contrast, the HMX-W300 is fairly utilitarian and rough around the edges. The screws on the outside of the camcorder’s body, for example, are visible. That’s fine, but not exactly eye catching. At least not in a good way.

The front of the camcorder bears a 4.3mm, F2.2 lens and a grip-friendly coating. The other side houses a 2.3-inch, 230k-dot LCD display and a handful of push controls. There’s a central mode dial, although this is for familiarity and little more. But you can control zoom here and set underwater mode as well.

The rest of your controls are located along the HMX-W300’s edges. With the screen facing you, the power is on your right, microSD card and HDMI port on the left, and the flip-out USB arm on the bottom.

You’ll get the Samsung HMX-W300 as well as a wrist strap. No charger comes included because you can charge the unit from any powered USB port. Your computer or even the wall adapter for your smartphone will likely do the trick.

As you’d expect, the user interface and navigation in the HMX-W300 are pretty simple. The camera is meant for quick video and photo grabs, not cinematic masterpieces. There camera/camcorder button helps you toggle between video and photo, and from there you’ll primarily use the menu and OK buttons to determine settings.

There’s only so much you can do here: You can determine resolution and minimally adjust light balance, among other simple options. Underwater shooting has its own control on the face of the camcorder.

The only area we had any hang-ups with was playback. We often thought we were diving into video clips only to realize we were in stills; the camera separates them and you have to toggle back and forth via the dedicated button instead of just seeing them set apart on the screen without this action.

Overall, not much complicates the experience of using the HMX-W300, although you should going into it that it’s a limited experience. (The $139 price tag should also tell you as much – for the record it was $160 at launch.)

It should go without saying that the HMX-W300’s primary feature is its durability. It’s waterproof up to 9.8 feet, shockproof, and fights dust and sand. In a couple drop tests, the camera most assuredly didn’t explode to bits, but it did scuff a bit. Nothing major though, and given the camera’s minimalist look, you aren’t sacrificing a beautiful body here.

Despite its no-frills design, the HMX-W300 does conceal a few hidden gems, including video and still filters. You have the option of adding fisheye, retro, negative, or a handful of other creative modes to your shoots.

Of course what’s important here is how good the camcorder is with handheld, on-the-go video capture. The HMX-W300 shoots 1080p full HD and offers some noteworthy extras. You can bookmark clips and even add music snippets and pause video while recording.

The “auto-share” feature is a little misleading; there’s no button to connect to Wi-Fi and immediately zip your content to YouTube or Facebook as you might imagine. Instead when the unit is plugged in via USB to your PC, you can choose files to send to these respective sites. This eliminates a lot of the draw here – there’s no convenience factor for being away from the desk and able to send photo or video.

At this point, you’ve probably figured out the HMX-W300 is a limited camcorder. This thing is a steal for anyone who wants the quick and dirty underwater video and photo experience. That said, there are a few things that stand out during use.

For starters, bright sunlight will make display nearly useless. During testing out on the water in direct and bright sunlight, we couldn’t tell if we were taking pictures or video… and the result is a handful of videos in which people are posing for pictures, unknowingly being recorded.

Luckily the buttons make for quick use, getting you in and out of settings as fast as can be – which is a very necessary feature for underwater photography of any kind.

The still capture simply doesn’t stand a chance, though. The 5-megapixel BSI CMOS sensor tries its little heart out, but on dry land it’s not going to reveal any amazing images. Underwater, results are fairly average. Most tough still cams have some optical zoom and decent digital zoom, and better sensors to boot. Of course, most tough still cams are also at least double the price of the HMX-W300.

The HMX-W300’s main selling point is its price; which is never a great indication of quality. But value-wise, this thing is a steal. You will be hard-pressed to find another device that shoots stills and video underwater for $139.

Of course, you’re also short-changing the results. You can’t expect to get top-notch quality while also paying a fraction of the price. But for a bare-bones device that will grab you videos and photos in extreme conditions and add underwater photography to your repertoire, then the HMX-W300 is surely one of the most affordable options for you.

Also, for anyone not willing to make a big investment in a hand-held camcorder yet (think about that person who’s gone through a variety of broken phones this year, or the teenager who loses interest all too quickly), then this damage-resistant, inexpensive, flexible device could fit the bill.