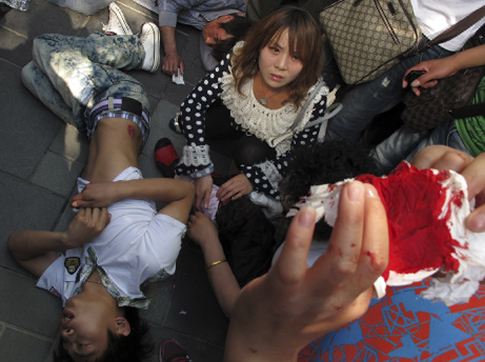 According to CNN, the arrival of the iPad 2 and White iPhone in China were cause for a violent scene that shut down a Beijing Apple Store. An alleged scalper tried to cut the line multiple times, prompting security and staff to become involved. Belligerent members of the scalper’s family began a shoving match with Apple staff, causing security to lock the business’ doors.

Which didn’t go over well with the hoards of Apple fanboys who had been waiting in line patiently for their iDevices. Customers then rushed the glass doors, shattering them. A handful of security and patrons sustained minor injuries.

“The Apple store in Sanlitun [Beijing] closed for several hours on Saturday after a group outside the store became unruly,” local Apple spokeswoman Carolyn Wu told CNN. “The store team acted to protect themselves and our customers by closing the doors and preventing the group from entering. The safety of our customers and our employees is our top priority.”

The iPad 2 and White iPhone both launched within the last week in China, and both have seen incredible demand. Apple products are particularly popular in the country, which unfortunately is home to only four Apple retailers – not nearly enough to satiate the incredible growth of iOS customers in China. Luckily for the iPad 2 and White iPhone fanatics in the area, the store reopened the next day and returned to business as usual. Scalpers also quickly got back to their day jobs, peddling their newly-purchased iOS gear directly outside the store.

China’s grey market is incredibly profitable, and there have been reports that resellers have been buying and selling the iPad 2 for only a $30 markup. These operations are much more out in the open than in many markets, and have led to many incidents concerning product launches.