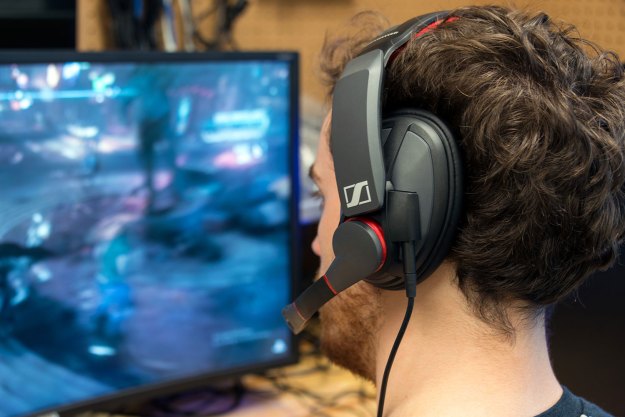 “The GSP 350 is a well-rounded headset, perfect for hardcore PC gamers looking to tailor their experience around specific games.”

Sennheiser may be best known for its wide array of headphones and professional microphones, but the company has begun making a name for itself in the quality gaming headsets space. Enter the GSP 350 gaming headset, which maintains the quality you’d expect from a Sennheiser product, but has a more accessible price point than a lot of Sennheiser gear, making it an excellent option for serious PC gamers on a serious budget.

The GSP 350 arrives encased in a vacuum-formed plastic shell, evoking the image of Han Solo sealed in carbonite. In the box are a few accessories, including a 5.5-foot cable with 2.5mm jack on one end and a micro USB jack on the other, and a 4-foot micro USB to USB connector cable. The first thing you’ll notice is the GSP 350’s muted gray-and-red color scheme, and the large mic connected to the right earcup. You can connect the GSP 350 to your PC and start gaming immediately, but you’ll need to get into the software to enable virtual 7.1 and other features like mic side tone and EQ presets.

The GSP 350 is a closed-back, over-ear headset with a split headband design. The only point of control on the headset itself is a volume dial on the right earcup. Its plastic frame is light but flexible and never creaky, which gives us confidence in its construction. Even the swivel joints connecting the headband to the earcups, which can often feel flimsy or brittle on plastic gaming headsets, are sturdy.

The earcups and headband are both padded with memory foam, though the earcups have a leatherette upholstery while the headband features woven fabric. It’s soft and comfortable to wear, and the earcups create a good seal around the ears to reduce outside noise. In some ways, the seal and the leatherette material might work too well, as the earcups can get slightly warm after long periods of time. This didn’t negatively affect our experience, but your experience may vary.

In theory, the split headband should alleviate pressure on the top of the head, but that was only partially true in our experience. After marathon gaming sessions, we felt some noticeable, albeit minor, discomfort on the top of the head, but that’s to be expected with nearly any headset. This was the only point of pressure — the clamping force is gentle without being too loose, and the padding is comfy. Finding a good fit is easy, as the headband arms can be adjusted smoothly and easily.

While there’s plenty to appreciate about the GSP 350’s design, it does continue some aesthetic choices from previous Sennheiser gaming headsets that we’re less keen on.

The GSP 350 has a tasteful minimalist design.

Much like the PC 373D, the GSP 350 feature an extremely long cable that terminates in a toggle for Dolby virtual 7.1 surround sound, which then connects via micro USB cable to the PC. As we said in our review of the 373D, long cables are great (when you have the need for one) and a quick-toggle for Dolby is appreciated, but we wish the dongle included volume or even EQ toggles like many other wired USB headsets feature. We also aren’t too keen on the conspicuous mic, which can’t be removed, but seeing as this is a gaming headset first and foremost, it makes sense. And at least it can be flipped up to mute.

These might seem like minor nitpicks being spun out into larger issues, but they’re really only relevant because of how much we like the tasteful minimalism that otherwise dominates the 350’s design.

The GSP 350 require a driver download from Sennheiser’s website to work properly, and to enable the Dolby 7.1 and EQ preset features. However, as we mentioned above, we would have preferred more direct control on the headset or USB dongle itself. As it stands, only volume, Dolby virtual 7.1, and mic muting can be physically controlled. Everything else – EQ presets, microphone noise reduction, and side tone pick up of your own voice chat – is handled by the software. That makes it difficult, and in some cases impossible, to adjust those features on the fly while gaming.

The first thing we noticed when listening to the GSP 350 is that it gets extremely loud, and more importantly, remains clear even at high volume levels. This allows you to really tune into the game — and tune out the world — creating a more engaging experience.

Turning on the digital 7.1 increases ambiance and immersion.

With no EQ presets selected, and the digital Dolby 7.1 surround sound turned off, the GSP 350 has strong, full-bodied mids and powerful bass. There’s a clarity to this headset that you don’t often enjoy at this price level.

Turning on the digital 7.1 not only increases the directionality, but also adds some subtlety to the low end, making ambient sounds much more noticeable. For instance, the quiet howl of the wind adds to the immersion of trekking through snow-capped mountains in Skyrim Remastered, while the little crunches in the snow were more textured. We did notice some minimal loss in the midrange presence, but that was the only discernible negative we found while playing with the virtual surround sound engaged.

The esports preset, naturally, is tooled for playing games like League of Legends or Dota 2. It goes for a more equal presentation of the mix, while slightly favoring the higher frequencies so you can better hear voice chat. The game preset works well for 3D games, especially when virtual surround is on, though it varies from game to game, and depends on whether multiplayer is being used or not. When playing single-player games, we mostly preferred playing with the preset off; in multiplayer, however, toggling the game preset again made voice chat easier to hear.

The GSP 350’s range of EQ options are all viable choices for gaming.

Music playback is the GSP 350’s worst talent and, ironically, that problem is exacerbated by the music preset. The bottom-heavy mix results in less detail when listening to music than you would get with a pair of similarly priced headphones outside the gaming genre, and the treble is often thin or drowned out compared to the other registers. It’s unfortunate, but the GSP 350 is built for gaming first and foremost, so we can’t fault it too hard for this shortcoming.

As for the mic performance, while we find the design itself to be a bit much, we’re happy to say that sound quality is quite impressive. The system has very little latency, and delivers loud, consistent voice playback. While noise canceling can adversely affect voice capture on many headphones, we experienced no loss in fidelity there after enabling it on the GSP 350 via the software. The feature also offers ample reduction in ambient room noise.

This review is for the GSP 350, but it’s pertinent to bring up the GSP 300, the GSP 350’s twin sibling. In most ways, the headsets are equal – the same sound quality, mic quality, and physical design. In fact, according to Sennheiser’s technical specs for each, the two devices are identical. However, there are some distinct differences.

The next major difference is the connection style. While the GSP 350 only supports USB connection out of the box, the GSP 300 comes with a dual 3.5mm cable (one for audio, another for the mic) for PC connection, and features an adapter to plug into gaming consoles. The GSP 350 requires an additional purchase of a proprietary 2.5mm to 3.5mm cable to work with consoles. Since the GSP 300 doesn’t require any software, the headset will be fully functional with whatever device its plugged into, unlike the 350, which requires a driver download.

If you’re more into console gaming – and don’t mind giving 7.1 virtual surround sound, it might be worth giving the GSP 300 a look.

Sennheiser offers a two-year warranty for the GSP 350.

While the GSP 350’s sound quality and design are already notable, it’s the viability of its features that make it stand out. On most headsets, EQ presets are rarely much better than the bass mix, but the GSP 350’s various settings are all useful and diverse enough that it could easily be your PC-gaming headset of choice for any game.

Whether you play on console or PC will help dictate whether the GSP 350 is for you. If you’re a PC gamer first, the GSP 350 is a great choice, especially if it’s in your budget. However, if you’re a console fan, the more affordable GSP 300 may be better suited for you. Moving outside the Sennheiser family, few wired headsets can beat the $150 Cloud Revolver S, which boasts universal compatibility, high-end performance, and impressive design.

While plastic headsets are inherently more fragile than those with metal frames, we aren’t too worried about the GSP 350’s solid design. The sound quality and mic quality are going to keep you happy, too.

Yes. The GSP 350’s sweet mix of comfort, performance, and value make it a top choice for thrifty PC gamers.