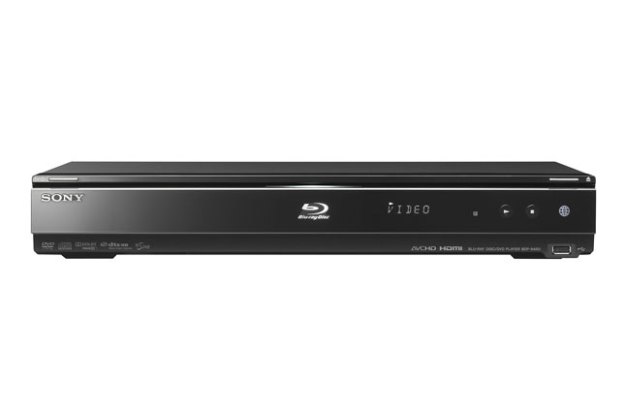 “Support for YouTube, Netflix and Pandora makes Sony’s BDP-N460 one of the most capable Blu-ray players in its affordable price range.”

Sony basically pioneered Blu-Ray disc technology so it stands to reason that they would be a trusted maker of quality Blu-Ray disc players. However, consumer level Blu-Ray players from Sony and others have historically been slow, clunky and often manufactured on the cheap to make the new technology more affordable for understandably reluctant buyers. Sony’s new BDP-N460 seems to have broken that trend by offering a wealth of features, intuitive menus and a dizzying selection of streaming internet media access in a well built player available at a surprisingly low price. As such, the new BDP-N460 sets the bar exceedingly high for affordable Blu-Ray players, and that’s good news for everyone.

The all black BDP-N460 has a very clean look with only a power button, eject button and “stop” and “play” buttons gracing the front panel. The disc tray is hidden behind a motorized flip-down panel that snaps back into place when pulled down manually (handy for those with kids whose prying hands tend to find their electronics). Other than the disc tray itself, nothing else is hidden behind the panel. That means that the remote control is not optional with this player. Without it, there is no way to navigate menus and, depending on the disc, movie playback may not be possible.

As is the case with most Blu-Ray players, the BDP-N460 comes with few accessories. Plan on purchasing an HDMI cable for the best connection to your HDTV/ A/V receiver or better quality Component Video cables than the manufacturer supplies if that is your only option. In the box with the BDP-N460 we found a remote control, batteries for the remote, a user manual and the typically cheap “throw away” RCA A/V cables.

Like most Blu-Ray players, the BDP-N460 supports Full 1080p video output via HDMI and is capable of passing on the latest Dolby Digital and DTS surround formats to your A/V receiver. It will not decode and send out these surround formats via analog so to enjoy these sound formats, an up-to-date A/V receiver is necessary. Still, standard DTS is available through either the Coaxial or Optical connections for those without a newer A/V receiver.

In keeping with a growing trend, the BDP-N460 also offers access to Netflix, YouTube and other popular streaming internet video content as do many other popular Blu-Ray players. What sets this Sony player apart from the others is that it doesn’t stop at Netflix and YouTube. With the BDP-N460, you have access to several other streaming movie services as well as a host of other, if less popular, video feeds. The list is far too long to include here but is populated with several health, cooking, technology, vblog and television video feeds (sorry folks, no Hulu….yet). Not only that, but the BDP-N460 allows the user to configure an RSS client to download and present any available video blog on the internet. For those who routinely view this media from their PC, we think this option will be particularly attractive. The content availability doesn’t stop there; this player also supports Pandora internet radio and any other public radio station currently broadcast on the internet. Firmware updates may enable more internet radio availability in the future, but the current options are more than most could want.

To access all of this online content, you’ll need a hard wired Ethernet connection to your home’s wired or wireless network. Out of the box, the BDP-N460 has no wireless internet capability but a Linksys adapter can be purchased separately to enable this function. We presume this strategy was employed to reduce the cost of the player but at an asking price of $90.00, the WET610N wireless adapter seems a bit cost prohibitive. If wireless access is what you need, we suggest investigating a different player.

The BDP-N460’s video quality is on par with other budget players in its class. Generally speaking, only videophiles are likely to discern the video quality differences between a budget and high-end player. Suffice it to say that this Sony player will do a great job of showing off your Blu-Ray disc collection. As a DVD upconverter, the BDP-N460 is on par with other budget players and does a decent job of making your lower resolution DVDs look a little better on your fancy high-definition TV screen.

Load times with this player were, unfortunately, also on par with other players in its class. Though the BDP-N460 does offer a “Quick Start” feature that promises to reduce boot time, we didn’t feel that it shaved off an appreciable amount of start-up time. For now, it would seem that buyers should simply expect slower performance than what they’re used to from their standard DVD player.

Where the BDP-N460 stands above the rest is its user interface. The set-up menus are easy to navigate and understand – that’s a great start. We were more impressed, however, with the ability to quickly enter text in search boxes when looking for specific video. The YouTube interface is the best we’ve seen to date, offering not just search options, but quick access to favorites and playlists under the user’s YouTube account as well as highly rated and “most watched” videos. The picture and audio quality from YouTube videos were better than we’re used to, though we were still unable to access HD-specific content from YouTube.

The only disappointment with Sony’s BDP-N460 was its Netflix interface. Only our Netflix Instant queue was available for viewing. There is no option for searching and adding more content, nor was there any access to newly added content or Netflix suggested content as is available through, say, the Xbox 360 Netflix interface. When we tested the Netflix streaming video and audio quality, we noted that both were on par with other similarly capable devices.

At about $150.00, the Sony BDP-N460 is a tremendous value. Its build quality is a few notches above other budget players but its access to vast amounts of internet video and audio content sets it well apart from other network enabled Blu-Ray players. Top that off with a superior user interface and Sony’s reputation for reliability and you have an affordable Blu-Ray player that is hard beat.

More than 80% of websites you visit are stealing your data
This game lets hackers attack your PC, and you don’t even need to play it
Chrome just added a great new way to protect your passwords
Android 13 is here, and you can download it on your Pixel phone right now
Samsung reaches new heights with this SSD, but it could go even higher
Apple M2 Pro and M2 Max MacBook Pro just received some good news
We finally might know what Apple will call its AR/VR headset
New AMD B650 Extreme motherboards are built for budget overclocking
This startup claims to have unlocked the secret to speedy CPUs
SpaceX Starlink internet heads to first cruise ships
We really didn’t expect these two new contraptions from LG
There’s a problem with those amazing Ryzen 7000 benchmarks
Halo Infinite Season 3 delayed until 2023, split-screen co-op canceled