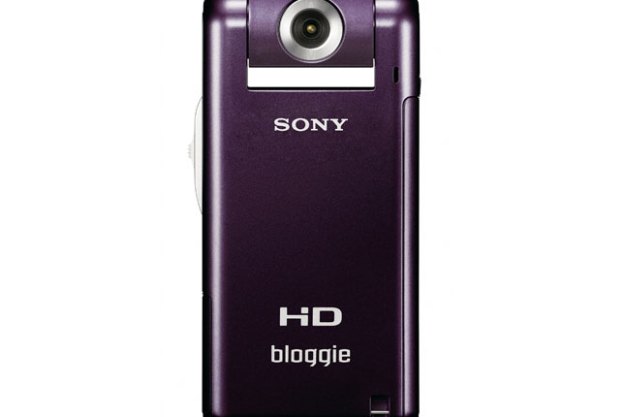 “Sony’s Bloggie MHS-PM5 offers 1080p resolution for a surprising price, but makes its share of tradeoffs to get there.”

Sony’ latest entry into the booming pocket camcorder market pairs a 1080p image sensor with a unique lens that swivels 270 degrees up and down. While novel, lightweight and surprisingly affordable at $150, we found the Bloggie PM5 can’t match the video quality of many less endeavoring pocket cams.

The Bloggie shoots true 1080p video and 720p video at 60 frames per second, with SteadyShot electronic image stabilization and 4x digital zoom. Those specs put it roughly in league with the likes of Kodak’s Zi8, JVC’s Picsio FM1, and Samsung’s HMX-U10. What sets it apart from this growing crowd of evolved pocket cams? A swiveling, top-mounted lens. It faces into the belly of the camera while closed, keeping it protected, then rotates out 270 degrees to shoot forward for normal videos, up for panoramas (not to mention riveting ceiling and sky footage) and back for shooting moody video diaries to put on YouTube.

Sony’s PM5 was designed to inhabit pockets, and it looks the part. Although not quite as tiny as Flip’s MinoHD or Creative’s VadoHD, the 4.25-inch-tall cam can hide completely under Kodak’s bigfoot Zi8, and at only 0.75 inches thick, makes Flip’s other offerings like the UltraHD and SlideHD look positively fat. The all-plastic body also keeps it relatively light, too, at only 4.5 ounces.

Although most competitors have copped Flip’s dead-simple control scheme – a giant record button in the center with directional arrows around it – Sony takes a more traditional digicam approach with the PM5. A 2.4-inch LCD sits front and center, while the all-import record and snapshot buttons get shoved over to the far right. The thumb naturally gravitates to the middle of the screen when gripping it, making this arrangement somewhat awkward unless you want to use two hands. Around the corner, an exceptionally flimsy feeling zoom slider lets you glide through different levels of the 4x zoom. Below the LCD, you’ll find typical playback and menu buttons, plus a five-way directional nub.

Sony’s bundle includes the usual protective pouch and lanyard, plus two welcome extras: RCA output cables and a short USB extension. The RCA cables make a nice touch for sharing videos (although HDMI would really be ideal) and the USB extension is a near necessity, considering the Bloggie’s rigid USB connector doesn’t pivot the way some other cams’ do.

Video from pocket cams never approaches the output from optically stabilized, much larger camcorders that cost two or three times as much, but they typically provide high-quality footage that’s impressive relative to their size and price. The PM5 delivers acceptable video on par with many of its peers, but suffers from many of the same flaws, too.

The motion blur that plagues this class of camcorder is just as pronounced on the PM5 as on Flips’ MinoHD, Creative’s VadoHD or Kodak’s Zi8, but we noticed another issue, too. Panning the camera quickly seems to warp straight edges, creating almost a whiplash effect known as “rolling shutter.” A vertical object in the frame – like a column – will appear to warp and tilt during a quick turn. All CMOS devices suffer from this effect to some degree, but Sony’s seems to be one of the only ones that demonstrated it in normal use.

Low light performance on the PM5 is particularly abysmal. Stepping into a dim room feels like stepping into the slow motion jutter of a strobe light, as the camera’s sensor drops exposure time dramatically to compensate. Other cams do the same, but manage to maintain fluid video. Even with a still shot, the blocky, poorly exposed image still lags well behind what other cams manage to do with the same lighting.

Even with good indoor lighting, video from the PM5 looks hazier in comparison to the 1080p output from Kodak’s Zi8, and even 720p output from Flip’s SlideHD and Creative’s VadoHD, with fuzzier details and more muted, inaccurate colors. Fluorescent lights, especially, seemed to throw the PM5 for a loop, making scenes look dingy and yellow.

Oddly enough, the PM5 has been capped at 29 minutes of recording, which can become a major nuisance if you’re attempting to record a longer event, like a concert, without interruption.

The $150 price tag on the PM5 makes it an attractive option, but the sacrifices you make to get there just don’t justift it. Kodak’s Zi8 mops the floor with the PM5 on image quality, for only $30 more. Small size and a swiveling lens just don’t make up for major drawbacks like awkwardly placed controls, capped recording times, and subpar image quality. Although Flip’s MinoHD shoots better looking video, the PM5 can handle 1080p, offers a much lower price, and accepts SD cards, substituting some versatility and practicality for quality.