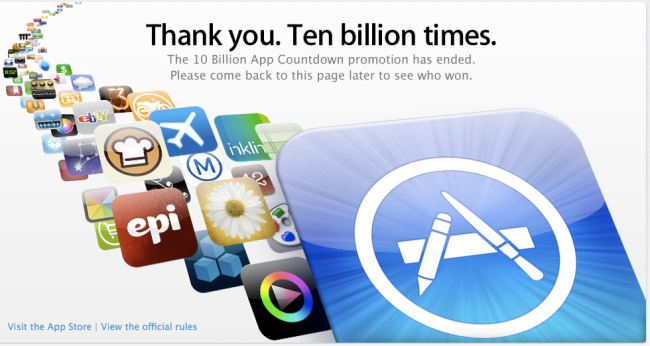 Apple over the weekend reached its ten billionth iTunes app download, the company announced on Saturday.  The record app was a free game called Paper Glider and was downloaded on the iTunes account of Gail Davis of Opington, Kent, England. When Apple called Davis to inform her that she had won a $10,000 iTunes gift card, the mother of two said “Thank you very much, I’m not interested” and hung up the phone.

After her daughters informed her of her mistake, Davis frantically tried to call Apple back, but was unable to get past Apple’s help desk operators.

“The more I thought about it, the more I realized it was a genuine call,” she says. “The girls were getting quite tense. They never would have forgiven me. They would have held it against me for all eternity,” Davis is quoted as saying in a Cult of Mac report.

Fortunately for her, an Apple executive rang back a few hours later to deliver the news. Davis credits one of her daughters for making the fortuitous download that earned the family $10,000 in additional app downloads. Davis, whose daughters have the only app-ready devices in the household with two iPod Touches, says she’s considering upgrading her iPod Nano to get into the app bonanza.

Apple began an official countdown to 10 billion downloads on January 14, projecting that it would achieve the record on January 23. The winning download came a day earlier than expected on Saturday January 22.  The official official countdown page has now been changed to read “Thank You 10 Billion Times.”While Apple launched the App Store in July of 2008, the company says 7 billion downloads have occurred during the last 12 months.

Android 13 is here, and you can download it on your Pixel phone right now
Dell could be working on the same charging tech Apple has been developing
Best Buy’s new retail store looks like a true Apple Store competitor
M2 MacBook Air struggles with heat, and we now know why
Chrome just added a great new way to protect your passwords
This game lets hackers attack your PC, and you don’t even need to play it
Apple M2 Pro and M2 Max MacBook Pro just received some good news
We finally might know what Apple will call its AR/VR headset
New AMD B650 Extreme motherboards are built for budget overclocking
This startup claims to have unlocked the secret to speedy CPUs
SpaceX Starlink internet heads to first cruise ships
We really didn’t expect these two new contraptions from LG
There’s a problem with those amazing Ryzen 7000 benchmarks